Things to Do: Apple Picking Near Columbus, Ohio 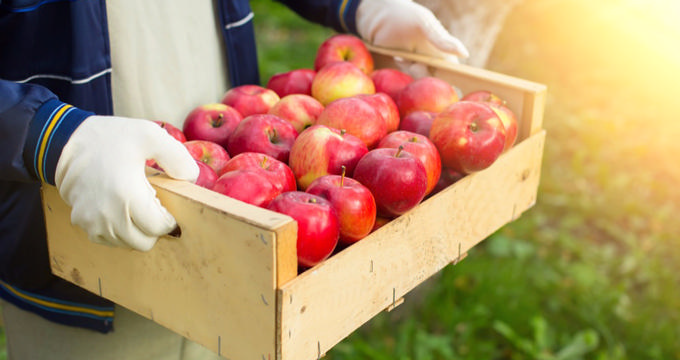 The humble apple is perhaps the most common and best-known fruit of all, but it's also one of the most beloved and popular, especially in the United States. All around the nation, the optimal soil and weather conditions of various states help America to produce huge quantities of delicious apples in dozens of different varieties, with a few states standing out as some of the best. Ohio is a great example, with Ohio's apple growers making over 100 million pounds of apples every single year to be shipped off all around the country.

Apple picking season in Ohio typically lasts from September (or late August, in somecases) through to the end of November (or early December), with the state producing approximately 40 different kinds of apples in total. Some of the most popular apples you can pick in Ohio cities like Columbus include the Cortland, Crispin, Golden Delicious, Fuji, Red Delicious, Gala, Granny Smith, Stayman, and McIntosh, with dozens of others also available. With so many excellent apples being grown each and every year, it's no surprise that apple picking is one of the most popular activities in the Buckeye State.

Located out in Pataskala, only a short drive easy of Downtown Columbus, the Bob Lynd Fruit Farm and Market is one of the most historic and beloved apple picking locations in the area. This location has a history dating back to 1919, so has been satisfying the people of Columbus, OH, and the rest of the state for a full century now. A lot of different things are grown here, including pumpkins, peaches, and berries, but there's a huge focus on apples, with dozens of different varieties just waiting to be picked when the apple season starts up.

Some of the apple picking varieties you can find at Bob Lynd Fruit Farm and Market include Jonathan, Cortland, Honeycrisp, Gala, McIntosh, Red Delicious, Pixie Crunch, Sweet Sixteen, Rome, Autumn Crisp, Melrose, Fuji, Golden Delicious, Golden Supreme, Crimson Crisp, and plenty more. In addition to all those different apples, you can also pay a visit to the farm store to purchase a full range of fres produce and baked goods, take a trip around the corn maze, or participate in one of the many special events and activities that are organized at this Columbus apple farm all through the year.

Another great apple picking spot near Columbus, Ohio is CherryHawk Farm Apple Orchard. Situated in Maryville, this apple picking location is just a relatively short drive north of the city and provides a simple, authentic, no-frills apple picking experience for people of all ages to enjoy. You won't find a whole host of extra activities and games to try out at this location, with the focus purely on the apples and the pristine essence of one of America's oldest pastimes.

So if you want to enjoy apple picking the way it was a hundred years ago, this is the place to be, and you'll be able to pick apples of more than a dozen different varieties, with some examples being Gala, Honeycrisp, RedFree, JonaFree, McIntosh, Snow, Cortland, Red Delicious, Yellow delicious, Fuji, and Wine Crisp. Apple picking season at this Columbus orchard runs from mid-July through to the end of November.

If you live or work in Columbus and want to find a great apple picking spot that really isn't too far away, try Hann Farms. Actually located in Franklin County, within the city limits of Columbus itself, this farm and orchard is a great place to spend some quality time with the kids or your friends once the apple picking season starts up. It's also open at other times of year for various seasonal vegetables and other fruits like strawberries.

When apple picking season arrives, Hann Farms is open every weekend and is always ready to welcome new faces and hand over some buckets and bags for you to fill up and take home with you. You'll find a nice selection of high quality apples here, with new varieties coming into season with each passing week, and the main apple picking season is in September and October here.

Columbus residents and visitors will need to be willing to drive a little further to reach The Orchard and Company, which is located out to the west of the city in Plain City, Madison County, but when they arrive at this location, they'll see that it was definitely worth the detour. One of the best rated and most beloved apple picking locations the entire state of Ohio has to offer, The Orchard and Company offers fun and games to go along with your apple picking, providing full days of family fun that you'll never want to end.

The Orchard and Company offers a pedal car track, a tire climb, slides, zip lines through the trees, a cow train, a petting farm, a hay barn, a corn pit, wagon rides, jumping pillows, a bakery serving up freshly made treats, picnic areas, a farm store, and even a cafe, as well as various special events like the annual fall festival. As well as all of that, you'll also be able to find plenty of different apples here including Macoun, Jonamac, Honeycrisp, Zestar, Gala, Red Delicious, Golden Delicious, and Royal Empire.