Vestal, NY Things to Do: Roberson Museum and Science Center 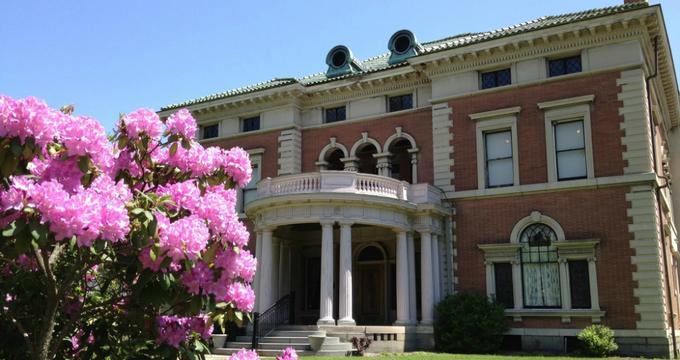 Located in Binghamton, New York, the Roberson Museum and Science Center is housed within the historic 1904 Roberson Mansion, offering a variety of exhibits focusing on the natural, social, and cultural history of the New York State area. The historic Roberson Mansion was the former home of Alonzo Roberson Jr., heir to the Alonzo Roberson Company lumber supplier and Board Chairman of the Marine Midland Bank, and his wife Margaret Hays, who commissioned the construction of an Italian Renaissance Revival-style mansion in 1904 in Binghamton’s Front Street-Riverside Drive district.

Architect C. Edward Vosbury was hired in 1904 to oversee the home’s construction, with interior design by New York City designers Pottier and Stymus and landscaping by Buffalo’s Townsend and Fleming. The home was finished in 1907 at a total cost of $107,500, featuring modern amenities including an elevator and dumbwaiter, central heating and intercom systems, gas-electric lighting fixtures, ballroom and billiard room, and three-story servants’ wing.

Following Alonzo’s death in 1934 and Margaret’s in the early 1950s, the home was deeded as an educational center and opened to the public as the Roberson Memorial Center in 1954, showcasing collections belonging to the Binghamton Museum of Fine Arts. Major additions were completed as part of renovations to the facility in 1966, including the addition of a digital planetarium facility. In the 1980s, the museum was accredited as an Association of Science and Technology Centers facility, adding an additional wing for scientific collections and study. The mansion’s former carriage house was renovated in 1996 for use as an educational center, and a New York State Heritage Area Visitor Center was also added to the facility in the late 1990s.

Today, the Roberson Museum and Science Center is nationally recognized as an art, history, and science museum, offering a variety of exhibits related to the natural and cultural history of the New York State area. As a nonprofit museum facility, the Roberson Museum is funded in part by grants from the New York State Council on the Arts, the Broome County Arts Council, and the Conrad and Virginia Klee Foundation. The historic 1904 Roberson Mansion facility is preserved as a living history site, serving as the museum’s centerpiece, with a variety of additional facilities offering exhibit areas and collections storage space.

Visitors may tour the historic Roberson Mansion facility, which features 26 rooms, including a billiard room, library, reception, and formal living room. 11 chimneys are showcased as part of the mansion’s Italian Renaissance Revival styling, along with an ornate grand staircase, a large ballroom space on the mansion’s third floor, and a number of period amenities, including Dutch metalwork and woodwork, silk damask wall coverings, and a wrought-iron elevator which still works today. Special events are held throughout the year at the mansion facility, including a Home for the Holidays annual display and a New Year’s Eve Masquerade in the Mansion event. The Roberson Mansion may also be rented for private special events, including weddings, receptions, photoshoots, and business events.

On the first floor of the Roberson Mansion facility, the museum showcases a permanent exhibit of a 1950s-era model train, the largest public model train display in the New York State region. The regional landscapes of Binghamton and nearby Owego, Johnson City, and Endicott are depicted in the display, which was constructed through more than 3,500 hours of work by museum staff and community volunteers. A documentary by local television station WSKG, Making Tracks, recounts the train display’s construction over the course of two years, beginning in March of 2011.

The museum’s Digital Planetarium is a 50-seat theater offering a variety of public and school tour programming related to astronomy, climate science, and natural history topics. Presentations range from 10 to 40 minutes in length and are available for showings throughout the week as part of school field trips for elementary and secondary school students. General visitor showings are also offered on Fridays, Saturdays, and Sundays, and planetarium rentals are available for small groups and organizations.

Temporary rotating exhibits are showcased throughout the rest of the museum’s gallery space, focusing on a variety of topics related to the natural, social, and cultural history of the New York State area and beyond. Major annual public special event programming includes the RoberCon science fiction convention, held annually in September, offering a variety of keynote speakers, demonstrations, workshops, and roundtable discussions. Other public special event programming includes an annual food and wine festival, a Halloween family event, and an annual doll and model train fair and exposition.

More Things to Do in Vestal, NY

Things to Do in Brooklyn, NY: Prospect Park Zoo

Things to Do in Saratoga Springs, New York: Tang Museum

25 Best Things to Do in Upstate New York