Things to Do in New York: Farmers' Museum 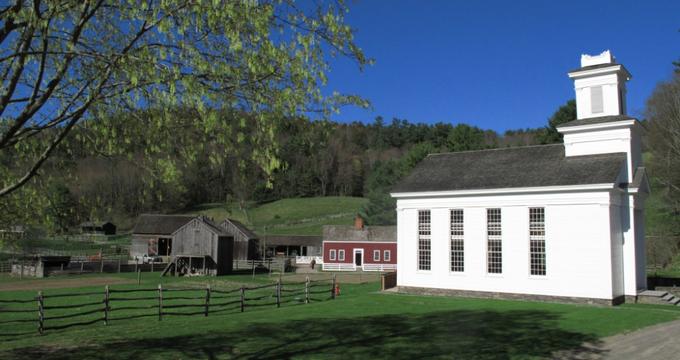 The Farmers' Museum is one of the country's oldest rural life museums. Located in Cooperstown, NY, the museum offers the public a unique chance to experience village and rural life in the nineteenth century firsthand through interpretive exhibits and demonstrations. Founded in 1943, the museum consists of a recreated historic village, a working farmstead, a Colonial Revival stone barn, and the Empire State Carousel. The Farmers' Museum works to preserve significant examples of architecture of upstate New York, heritage livestock, and early agricultural equipment and tools. Its collection of over twenty-three thousand items include important objects that range from plows to carriages to hand planes.

The Historic Village at the Farmers' Museum is a replica of a nineteenth century upstate New York village. The village is comprised of structures from rural communities around the state of New York, which were relocated piece-by-piece and painstakingly restored. Every building offers an intimate look at the domestic and commercial practices that were commonly used in rural life during the late eighteenth and early nineteenth centuries. The Historic Village includes a Blacksmith Shop, Tavern, Farm, General Store, Printing Shop, and much more.

Visitors to the Farmers' Museum can see how a farm operated during the mid-nineteenth century at the Lippitt Farmstead. This living example is a hearty and friendly homage to the pioneering spirit that helped shape the countryside of America. The farmstead features two barns, animal sheds, the Lippitt family farmhouse, six outbuildings, and a smokehouse. Younger visitors will enjoy feeding or petting young animals at the Farmstead's Children's Barnyard. Scenes and occupations change at the farm with the seasons, such as harvesting hops, taking care of young animals, shearing sheep, and weaving wool.

The Empire State Carousel at the Farmers' Museum is a great example of the traditional country fair ride. Called "a museum you can ride on," the carousel features twenty-five hand-carved animals that represent the natural and agricultural resources found in the state of New York. It also contains scallop shell chariot rides, an original lover's tub, and an Erie Canal boat. Folklore panels depict Deerslayer and Uncle Sam, while portrait panels feature Jackie Robinson, Grandma Moses, Teddy Roosevelt, and Susan B. Anthony among other notable figures.

Murals measuring eight feet depict various moments of New York history, from the construction of Levittown to the arrival of the Half Moon. Surround the mirrors of the Empire State Carousel are carved frames that depict eleven different regions of the state of New York, as well as carved place-names highlighting towns throughout the state. The sweeps of the carousel even feature more than three hundred feet of stencils of the state map, sugar maple leaf, apple, rose, and bluebird.

Guests of the Farmers' Museum also have the chance to see the one-of-a-kind Cardiff Giant, the ten-foot-long figure referred to as "America's Greatest Hoax." The gypsum figure has been on display at the museum since the 1940's. The Cardiff Giant was the centerpiece of a Binghamton businessman's moneymaking scheme. People came from all around to see the "petrified man" that some thought was a member of an ancient race mentioned in the book of Genesis.

More Things to Do in New York

Things to Do in Brooklyn: The Wyckoff House