Things to Do in New York: Mohonk Preserve in New Paltz 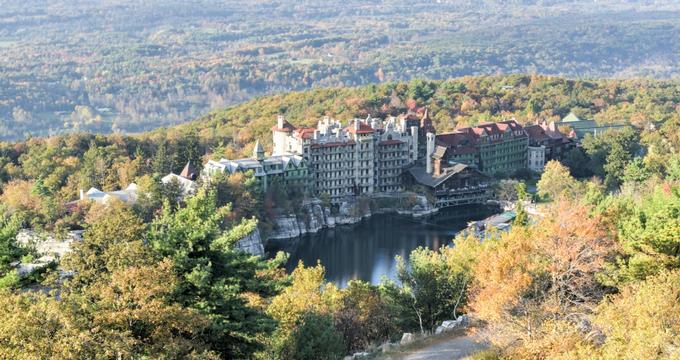 Mohonk Preserve protects more than 8,000 acres of mountain ridges, forests, streams and other New York environments through the support of donors, members and community partnerships. They manage and safeguard the Hudson valley, Shawangunks, and other natural lands as a nonprofit preserve with over 165,000 bikers, hikers, skiers, nature observers and climbers annually.

The Mohonk Trust was established on February 26, 1963 with a group of trustees and a small donation of $100 from Mabel C. Smiley. In 1966, The Mohonk Trust acquired 487 acres of the Trapps parcel from the Lake Mohonk Corporation. This parcel of land is one of the most impressive climbing attractions in the eastern US and established Mohonk preserve as a contributor to the sport of mountaineering.

Mohonk Preserve has been dedicated to offering educational opportunities to students in the region. Dr. Stephen Collins began using the preserve in 1967 as an outdoor laboratory space for his advanced ecology class and the founders of Mohonk Preserve have lead educational programming as well including a study on the Gypsy Moth, which was the first study on the creature and how it evolved without pesticides in the forest. An education program was also set up in 1985 with the New Paltz Central School District and the First Junior Naturalist program was offered at the preserve in 1989.

1967 also saw expansion of Mohonk Preserve in the acquisition of 687 more acres from Lake Mohonk Corporation called the Oakwood Parcel. Two years later, the Millbrook parcel of 1,287 acres was purchased and over the next 15 years an additional 5,000 acres were purchased from Lake Mohonk Corp. By 1972 the preserve hired its first full time park ranger.

A Visitors Center was added in 1998 followed by the Slingerland Pavilion later that fall. Today, visitors can also see the Eli van Leuven Cabin that was restored in 2000, see archaeological dig sites, enjoy interpretive programs on climbing at the Trapps, bird watch from the Open Space Conservancy, participate in the Citizen Naturalist Program and much more.

There are plenty of activities at the Mohonk Preserve to keep individuals and families entertained whether for an hour or all day long. The Visitor Center features a butterfly garden, an introduction to the Mohonk Preserve and Shawangunks regions, exhibits and short hiking trails.

There are over 75 miles of carriage roads and trails for hiking, biking and horseback riding at the Preserve. There are day use fees for accessing the trails and roads in the park. 30 miles of trails are specifically for mountain biking with trails interlinking with Minnewaska State Park Preserve and the Mountain House Resort. To enjoy horseback riding you must bring your own horse, there are no stables at the Preserve.

In the winter, cross country skiing is available and popular through the Mohonk Mountain House Resort which is a separate endeavor from the Preserve. Trails will remain open to non-skiers with signs posted in areas designated for skiing and snowshoeing only.

There are many public events that happen at Mohonk Preserve including Qigong, early morning bird walks, wildflower walks, dog walks and family walks that are free but require registration and happen on set schedules that can be found on the Mohonk Preserve website. Space is limited on guided hikes.

Bob Babb Wednesday Walks- Every Wednesday at 9:30 am Bob Babb a preserve member and volunteer meets any adults age 18 and older for a hike that will last until 12:30pm. Groups meet in the parking lot trail head. There is no reservation required for this hike.

Rock The Ridge- The annual 50 mile endurance challenge and fundraiser challenges participants to go 50 miles in the preserve in 24 hours or less. This event began in 2013 and has raise nearly a quarter of a million dollars.

Back to: Things to Do in New Paltz

Things to Do in the Hudson Valley, New York: Vanderbilt Mansion