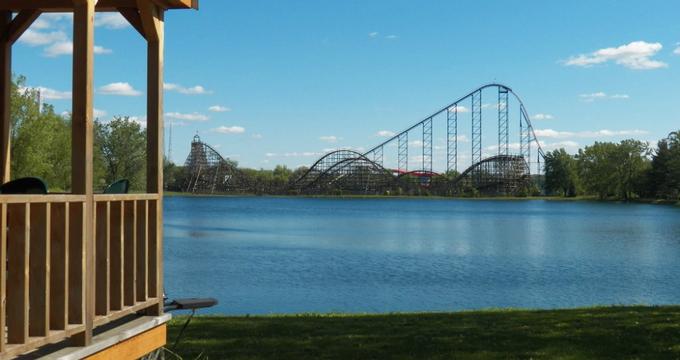 Located in Darien, New York, Darien Lake is a theme park operated by Premier Parks, LLC, offering a variety of high, mild, and family thrill rides along with a water park and onsite lodging options.

Darien Lake is a man-made lake that was excavated in 1954 and served as a popular public swimming facility throughout the mid-20th century. In 1964, a 23-site campground was opened by Paul Snyder on a 164-acre plot of land surrounding the lake, which was expanded throughout the following decades to include amusement activities for visitors on the 1,000 acres surrounding the campground. Activities included a fishing pond, petting zoo, paddleboats, miniature golf and tennis areas, and horseback riding. Throughout the 1970s and 1980s, Snyder added a number of ride attractions to the facility through a deal with HUSS Park Attractions and branded the amusement area Darien Lake Fun Country. In 1983, the park was sold in part to Funtime, Inc., the owners of Ohio’s Geauga Lake amusement park, who added major attractions such as a Giant Wheel constructed for the 1982 World’s Fair. In 1995, the park was acquired by Premier Parks, the operating corporation for the Six Flags park line, which added a number of major thrill ride attractions, including the world’s first hypercoaster constructed by ride manufacturers Intamin. In 2006, Darien Lake was one of seven Six Flags parks sold as a package to PARC Management, who operated the park until 2010, when it was acquired by Herschend Family Entertainment. In 2016, park management was transferred to the new Premier Parks, LLC corporation, a park management corporation formed by former members of Six Flags’ operating corporation.

Today, Darien Lake is owned under a lease agreement with real estate trust EPR Properties and operated by Premier Parks, LLC. In addition to its amusement attractions, Darien Lake offers overnight accommodations at its Lodge on the Lake Hotel, a North Woods-themed lodge offering 163 hotel rooms and suites and a heated outdoor pool. A full campground also offers more than 1,200 campsites, along with guest house, cabin, and RV hookup accommodations.

Eight roller coasters are featured at the park, including its newest offering, Tantrum, opened in 2018. The steel coaster offers a 98-foot vertical first lift taking riders up a 90-degree hill and down a 97-degree drop before reaching top speeds of 52 miles per hour. The park’s Predator coaster, modeled after a former Geauga Lake attraction, is the largest wooden roller coaster in the state of New York, while its Ride of Steel is the tallest and fastest in the state, reaching a top height of 208 feet and maximum speed of 72 miles per hour. Other coasters include the Boomerang steel shuttle coaster, which takes riders through its track both forward and backward, the Mind Eraser, the only suspended looping coaster in the state of New York, the five-inversion Viper coaster, and the motorcycle-themed Moto Coaster. A steel kids’ coaster, Hoot ‘N Holler, is also offered.

The park is open from May through October, with limited operation hours before Memorial Day and after Labor Day. A variety of dining options are offered throughout the park, including Maria’s Italian Kitchen, Frank and Teressa’s Anchor Bar, and the national chains Subway and Tim Horton’s. Daily park entertainment is offered at the Galaxy Theatre, the Beaver Brothers Bay Showplace, the Grande Theatre, the Lakeside Amphitheatre, and the Gazebo Stage. Periodic live concerts are also held at the park’s Darien Lake Performing Arts Center, including regional and national touring acts. Annual public special events include a Color Me Rad 5K run, an Ignite the Night laser extravaganza, a Father’s Day Car Show, and an annual Harvest Fest autumn celebration.