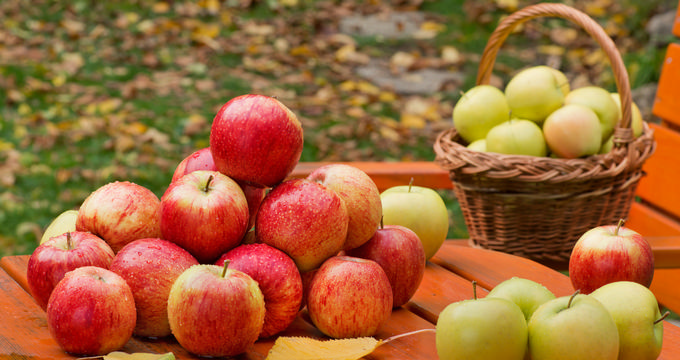 When the summer months finish and the crisp, cool air of fall begins to arrive, one thing is certain: apple picking season is finally upon us. Apple picking is one of the oldest and simplest of American pastimes, but it’s still one of the most popular, especially in the state of New York. Apples are official state fruit of NY and there are countless great orchards and farms to find all around the state, offering dozens of different varieties from Golden Delicious and Empire to McIntosh, Braeburn, and countless others. CDC information for travelers. Hours/availability may have changed. 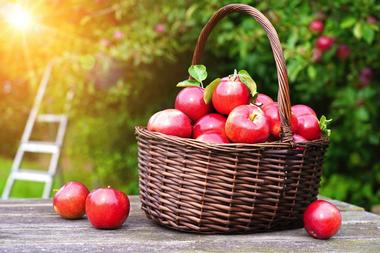 Apple picking is a really fun way to spend some time outdoors in fall. Even though the air is a little cooler than it was in the summer, the months of September, October, and November can still be a super time to head outside and wander up and down the endless acres of beautiful NY orchards. Many farms in the state offer U-Pick services for very low prices, letting you fill up bags and buckets of apples to be used in all kinds of recipes, from tarts and pies to jams, chutneys, sauces, ciders, and more. 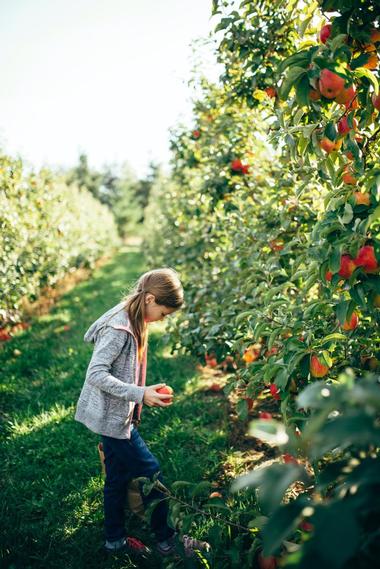 If you’re hoping to do some apple picking in NY, you have a lot of different locations to choose from. New York is blessed with an abundance of apple picking orchards, many of which offer additional activities and services like farm stores, hayrides, corn mazes, and more. Read on for some important details and overviews of the very best apple picking locations in NY.

Just a little drive away from Rochester, G and S Orchards is an extensive and beautiful fruit and veg farm covering around 150 acres in total. The titular ‘G and S’ are Gary and Stephanie, the farm-loving duo that has been running this orchard for over thirty years. U-Pick services have been offered at G and S for around 25 years in total, with a lot of different kinds of produce available to be picked throughout the year, including more than a dozen different kinds of apples like Red Delicious, Royal Empire, Fuji, and Granny Smith.

It might have the word ‘Pumpkin’ in its name, but Hank's Pumpkintown is also a fantastic apple picking location, and it’s very conveniently located for anyone in and around New York City itself. This orchard can be found on Long Island and is open every day through the fall months, offering lots of fun activities and special events for visitors of all ages to enjoy. Face painting, gemstone digs, corn mazes, hayrides, and more can be enjoyed at this NY apple picking spot. 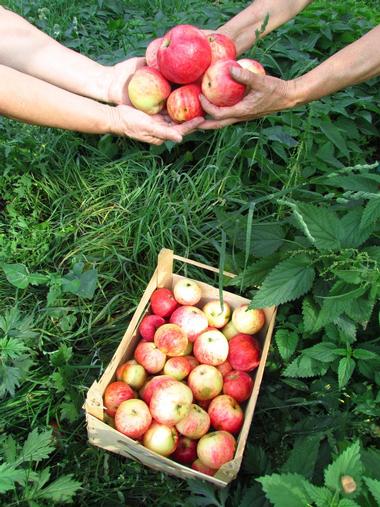 With eleven different apple varieties to choose from, including Empire, Fuji, Gala, and Golden Delicious, Apple Dave's Orchards is one of the most popular apple picking orchards in all of New York State and is nicely located among the beautiful scenery of Warwick. Live music and kids' activities can also be enjoyed at this location, along with freshly made apple donuts and other delicious treats. Apple Dave's offers fully free parking and admission and has been family-owned and run since 1949.

Another popular NY apple picking spot, Wilkens Fruit & Fir Farm grows more than ten different kinds of apples, all waiting to be picked and eaten fresh or used in all sorts of recipes. If you’re hoping to find a nice array of different apples, this is a super location to choose and it’s open for U-Pick from the early days of September right through to the start of December. All visitors can use picking equipment and bags that are handed out on-site, and the friendly staff will even drive you over to the orchards as part of the entry fee.

The Parrish Art Museum is located in Water Mill, New York and is renowned for its architectural design by Herzog & de Meuron. Samuel Longstreth Parrish fell in love with art and the Italian Renaissance when he attended Harvard College. Shortly after Parrish moved his law practice from Philadelphia to New York, he began actively seeking and collecting art. During the same time, Parrish would visit his family at their Southampton home.

In 1896, Parrish was traveling in Italy when he decided that he wanted to build a museum in Southampton to display his comprehensive art collection. When Parrish returned to the United States, he bought a piece of land next to the Rogers Memorial Library in Southampton. Then, he hired Grosvenor Atterbury, a renowned architect who was also a Southampton resident to design the museum. This museum, known as the Art Museum at Southampton, was a singular exhibition hall constructed completely of wood. Shortly after the hall was constructed in 1897, a concert hall was created.

Additions and renovations continued until Parish died in 1932. Shortly after his death, the interest in the museum declined. The museum’s popularity did not come back until Mrs. Robert Malcolm Littlejohn became the president of the museum in the 1950s. Under her direction, little renovations and measures were made to ensure the museum would stay open year-round.

By 1980, it became apparent that the Parrish Art Museum had too big of a collection and opportunity to remain in the original Southampton building. So, the Parrish Art Museum moved to a 34,400 square foot building constructed by the renowned architectural firm Herzog & de Meuron on November 10, 2012 in Water Mill, New York.

The Parrish Art Museum is home to over 2,600 pieces of art that range from the early 19h century to modern day. The museum’s permanent attractions focus on landscape paintings and American impressionism. Some of the notable artists featured in the permanent attractions are; John Sloan, Dan Flavin, John Chamberlain, William Merritt Chase, and Fairfield Porter. The museum even has collections and archives that are dedicated to the work of William Merritt Chase and Fairfield Porter.

After school programs differ among the designated age groups, but in general students participate in activities that enable them to learn about some of the world’s most influential and renowned artists, as well as create their own designs and pieces of art. High school students also have the chance in participating in similar educational opportunities, with the various art classes and lectures that are provided by the Parrish Art Museum. As for adults, they have the option of participating in various art classes, such as a Life Drawing class. Life Drawing is a class in which participants study different models and attempt to sketch what they see.

Back to: Things to See & Do in New York State

A reconstructed colonial fort, Fort Stanwix is located in Rome, NY. Fort Stanwix offers a detailed look into the history of the United States, alongside unique programming and demonstrations. Built by the British between 1758 and 1762, Fort Stanwix was a key defensive point during the French and Indian War. By 1776, American troops had rebuilt it to be used in the American Revolutionary War.

Fort Stanwix played a key role in these and other moments of United States history before being closed in 1781.

Years later, the original fort had been reduced to ruins, but the land occupied by the fort was designated as a national monument in 1935. When interest in the fort began to grow, archeologists began searching for the remains. What remained of Fort Stanwix was uncovered in 1965; by 1974, a reconstructed fort had been built; it was opened to the public in 1976.

Fort Stanwix has several permanent exhibits available at the park each day.

Marinus Willett Collections Management and Education Center – The Willett Center acts as Fort Stanwix’s Visitor Center. Aside from offering informational services and restrooms, the Wilmett Center features a small museum. Exhibits in the museum describe the fort’s military history and present historic objects found in the ruins of the original fort. The Visitor Center is also where guests will partake in an orientation from a park ranger.

Fort – Recreated based on the ruins of the original Fort Stanwix, the fort is the park’s most beloved attraction. Visitors can tour the grounds on their own or with the help of a park ranger. Reenactments in the fort are also frequent. Around the fort are three trails; each mirrors the events of various historical events, which can be explained in greater detail by a park ranger.

If wishing to tour the grounds in a group, visitors should contact Fort Stanwix’s Program Coordinator. More specific information about guided tours can also be found on the fort’s website.

Fort Stanwix is committed to providing quality education to the students who visit the park.

Field Trips - The monument is happy to accommodate field trips. They offer programs that are targeted to a variety of grade-levels; each is aligned with the New York State Learning Standards, as well as Common Core Standards. For older students, it is recommended that educators collaborate with Fort Stanwix’s Education Coordinator to prepare a program that will best benefit their students. The monument also welcomes home school groups.

Educators are encouraged to make reservations online in advance. Teachers will need to fill out a request form to coordinate their visit.

Junior Explorer Program - Fort Stanwix also participates in the Bureau of Land Management’s Junior Explorer program. This program educates young people about National Parks across the United States. Educational materials and fun booklets guide children through the historical elements of Fort Stanwix. This program gives young visitors the tools they need to become respectful visitors of national monuments, while also encouraging them to have fun. Materials can be obtained online or at the Junior Ranger Station in Fort Stanwix.

Backyard Rangers – Each month, children are invited to Fort Stanwix to learn about the monument in a collaborative, outdoor environment.

Fort Stanwix consistently hosts a variety of special events for its visitors. Presentations about the fort’s artifacts, weapons demonstrations, family programming, and exercise programs are all among the fort’s offerings.

Walk Through Time – This recurring event includes a tour of the monument. During the tour, a park ranger will share stories about the history of the fort and its grounds.

Family Fun at the Fort – Stationed in the Visitor Center, this event is great for visitors with children. Families are invited to play games, create art, and explore the park in a family-friendly environment.

Tales from the Past: Artifacts of the Fort – During this event, visitors can see historical objects from Fort Stanwix up close, accompanied by vivid stories of how they were used.

Fort Stanwix offers no dining options, but outside food is permitted on the park’s grounds. Guests are also directed to the town of Rome for a variety of dining options, often within walking distance.

Guests can purchase educational materials, books, and souvenirs from the Eastern National Bookstore, located within the park.

23 Best Things to Do in Buffalo, New York