Best Things to Do in Concord: Concord Museum 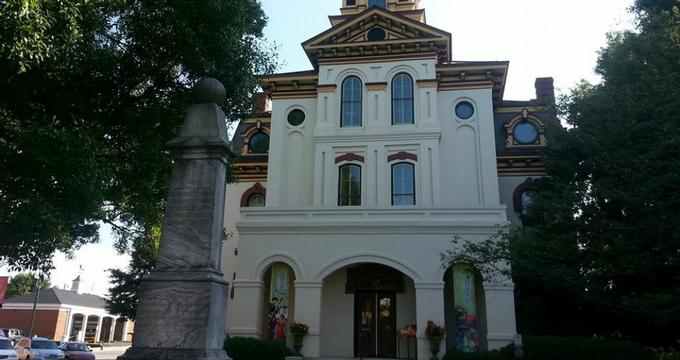 Located in Concord, North Carolina, the Concord Museum preserves social and cultural artifacts connected to the Cabarrus County region, including war-related memorabilia and a historical and genealogical research library. The Concord Museum was originally opened in 1939 as a public museum facility and repository connected to the Concord City Aldermen and the Coltrane-Harris Chapter of the United Daughters of the Confederacy.

From its inception through 2007, the museum presented artifacts and documents connected to the region’s Confederate and Civil War history. The Historic Cabarrus Association was developed in 1973 for the purposes of preserving Concord’s historic Cabarrus County Courthouse, which was set for demolition for the construction of a new city parking lot. The organization’s original board of directors worked in cooperation with the city’s Old Courthouse Theatre organization to preserve the historic structure and convert it into a museum facility. In 2007, the Historic Cabarrus Association and the Concord Museum merged to form a new museum facility showcasing the social and cultural history of the Cabarrus County region. Expanded museum operations have continued at the original Concord Museum facility, though the organization is in the process of searching for a new permanent museum facility. A partner museum facility, the Cabarrus County Veterans Museum, was also opened following the merger. In 2013, the museum embarked on a digital archiving initiative after receiving a major grant from the Cannon Foundation, with the intent of creating a complete online virtual museum.

Today, the Concord Museum is owned and operated by the Historic Cabarrus Association, which oversees it and its partner Cabarrus County Veterans Museum facility. Since the 2007 merger, the museum’s admission hours have been expanded to a four-day-a-week schedule, and a variety of public educational and special events have been added to the museum’s programming. As a community historical resource, the Historic Cabarrus Association is dedicated to community outreach initiatives and programming preserving the social and cultural history of the Cabarrus County region for future generations.

The museum is located on the first floor of the historic Cabarrus County Courthouse facility, which is also home to the museum and office facilities of the Cabarrus Arts Council. It is open to the public during the late morning and early afternoon hours Tuesdays through Fridays. Museum collections have been gathered on a donation basis through a community donor agreement, preserving historic artifacts and documents connected to the region’s social, cultural, and military history. Artifacts span from the region’s pioneer development to the present day, with a focus on 20th-century civic and social history. Collections focus on a variety of topic areas, including the region’s participation in the American Civil War and 20th-century international conflicts, as well as the cultural history of the area’s ethnic groups, including its indigenous, African-American, and Mexican-American residents. Fine art produced by regional artists and depicting themes connected to the American South is also featured.

All museum exhibits are presented on a rotating basis, with new exhibits rotated several times a year. Past museum exhibits have included Over There and Back Home, which focused on the 1,000 Cabarrus County residents who served in World War I.Hold the Phone: 120 Years of Progress presented the history of the Concord Telephone Company through a photography retrospective, while other exhibits have focused on topics such as the American Civil War, the county’s historic churches, and civic professions such as teachers and law enforcement service members. A research library is also offered by appointment for students and community members for genealogical and historical research. At the Cabarrus County Veterans Museum, which is also located within the courthouse facility, Cabarrus County service members who participated in conflicts from World War I through the present day are honored with a variety of displays and showcased artifacts.

A number of community initiatives and outreach programs are presented by the Historic Cabarrus Association, meant to preserve the city’s civic history and educate regional citizens on a variety of historical topics. Beginning in 2016, the Association launched a Cabarrus County Oral History Project, which aims to preserve oral histories from individuals throughout the Cabarrus County region and collect them in an easily accessible format. Guided walking tours of historic downtown Concord are also offered by the museum for small groups and organizations, including field trip opportunities for elementary and secondary school groups. Annual public special events presented in conjunction with community organization partners such as the Old Courthouse Theatre and the Cabarrus County Public Library include the Concord History Walk and periodic historical reenactment programming.

More Things to Do in Concord, NC