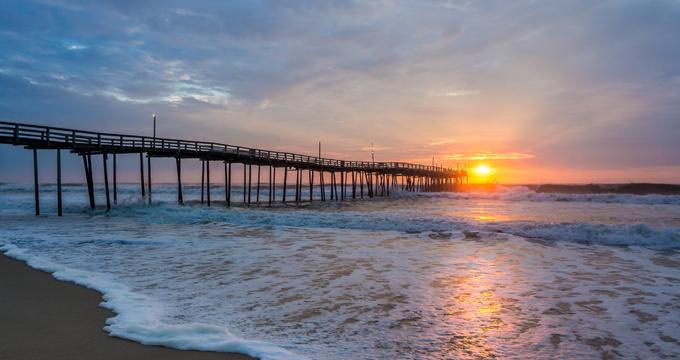 The Avon Fishing Pier in Avon, North Carolina, has been offering world famous Red Drum fishing on Hatteras Island since 1963. No fishing license is needed; sightseers and fishers alike can enjoy the pier with a one-day, three-day or season pass. The pier closes each November for the winter season.

The pier is best known for its giant Red Drum fishing, and many world-record fish have been caught at this site. The Red Drum is also known as channel bass, spot tail bass or redfish, and its range follows the east coast of the United States from Massachusetts to Florida. While young adults are normally in the 6-8 pound range, the largest on record was 94 pounds and was caught on Hatteras Island in 1984, just 200 yards from the Avon Fishing Pier. Fish cleaning tables, benches and a wide T-shaped “landing” at the end of the pier make it an ideal location for anglers. In addition to the giant Red Drum, fish caught from the pier include mackerel, mullet, cobia, bluefish and pompano.

Sightseers will enjoy the 665-foot long pier’s historic wooden planks, and the spectacular Atlantic Ocean and Avon village views. The pier’s wooden planks have the appearance of buckling from over 50 years in the salt and sun, but the structure is sound. The uneven planks add character, and serve as a reminder that the historic pier has survived several hurricanes and Atlantic coast storms. The shoreline adjacent to the pier is a public beach, and is popular for surfing when the summer swell is just right.

History: Hatteras Island is a barrier island that separates the Atlantic Ocean from Pamlico Sound on North Carolina’s coast. The 42-mile long island is part of a 200-mile stretch of barrier islands that make up North Carolina’s Outer Banks region. Hatteras’ village of Avon was historically named Kinnakeet. The name changed to Avon in 1883 when a post office was first established in the area. The pier was built in on Hatteras Island in 1962 by two local brothers, who took close to 2 years to complete the project. It is now the only pier still operating on the Cape Hatteras National Seashore.

Ongoing Programs and Education: The Avon Fishing Pier hosts an annual 4th of July celebration. Thousands attend the fireworks display that takes place at the end of the pier. Visitors set up on the shoreline for the day and enjoy live music, vendors and the view of the ocean.

The pier is also host to several fishing tournaments. The annual Red Drum tournament takes place in October each year at the height of the “Drum Run” season. The 10th annual tournament will be held in 2018, and top prizes include up to $900 for the angler who catches the most fish over the 5-day event, and up to $300 per day for the angler with the largest catch. The tournament culminates in an awards banquet on the final day. The PBR Classic Red & Blue Fishing Tournament began in 2014. The annual tournament takes place each November and concludes with an awards luncheon at the nearby Pangea Tavern. Other annual events include the Fish Like a Girl tournament. The all-female event ran for the third consecutive year in 2018 and the 150 participants raised over $4,000 for the Hatteras Island Cancer Foundation. Kids Fishing Frenzy is an annual weekly summer tournament, now in its third year. Participants register at the pier, and weekly “biggest fish” winners are announced each Friday.

What’s Nearby: An 18-hole miniature golf course is adjacent to the pier, offering family activities for those who’d like to take a break from fishing or beach-going. There is also a restaurant nearby, the Pangea Tavern, which is located at the base of the pier and serves classic Atlantic coast tavern food such as crab cakes, fried oysters, Atlantic calamari and North Carolina shrimp.

More about Outer Banks things to do

Things to Do: North Carolina Music Hall of Fame