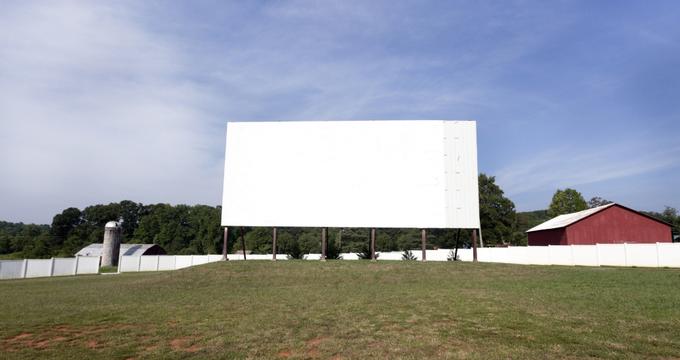 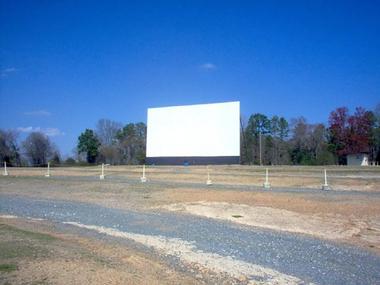 The Badin Road Drive-in theater was originally constructed back in the year 1948. It was closed many years later during the 1980’s, however, the historic drive-in was restored and reopened again in 1994. The Badin Road is open on a seasonal basis and show double features of first-run films. Originally featuring just a single large outdoor movie screen, an additional movie screen was added when the drive-in was reopened. Located in Albemarle, the drive-in is a cash-only theater, however, there is an ATM available. The outdoor movie theater is a great place for the entire family to have some outdoor fun. 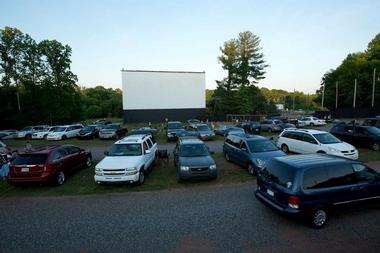 The Eden Drive-in Theater first opened back in 1949 in Eden, North Carolina and has been in operation ever since. The outdoor movie venue features a single large outdoor screen and can accommodate up to two hundred vehicles for a showing. Sound for the films the drive-in screens is provided through FM radio broadcasting. Triple features of first-run films are shown at the Eden Drive-in during the weekends, with the drive-in theater open seasonally beginning in the month of March. The outdoor movie theater also includes a snack bar where customers can get all their favorite movie snacks. 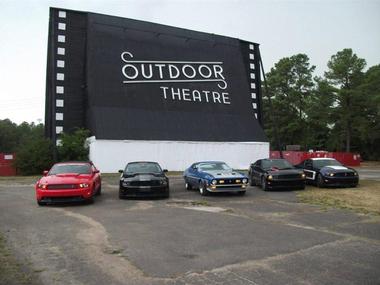 The Raleigh Road Outdoor Theater originally opened in the year 1949, and like the Eden Drive-in, it has been operating ever since its opening. The outdoor movie theater is a single screen drive-in with a maximum car capacity of 265 vehicles. Dogs are allowed on the property, provided they are leashed and well behaved at all times. FM radio is used to broadcast the sound for the films shown at the Raleigh Road Outdoor Theater. Browse NC islands and beaches

4.Movie Theaters Near Me: Hounds Drive-in 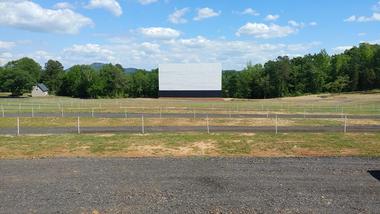 The Hounds Drive-in movie theater is one of the newest drive-in theaters in the state of North Carolina, as well as one of the newer drive-ins in the United States. While the majority of drive-in theaters continue to close, this more recently built drive-in was constructed from the ground up in 2016. When the old drive-in theater in the area closed in 2015, the owners of the Hounds, who also own the Hounds Campground, saw a need for a new drive-in. Open seasonally beginning in March, the drive-in only accepts cash and doesn’t allow outside drinks or food. 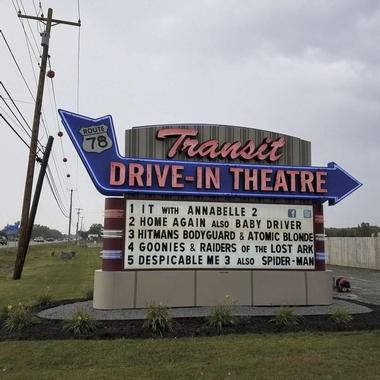 Enjoy a great night under the stars while tuning in to the newest movies and even some old-time favorites at the StateLine Movie Time Drive-in Theatre of Tabor City. Opened in 2019, this beloved local entertainment area is a single-screen drive-in and is just a short 30-minute drive from Myrtle Beach. Built specifically for families with young children to enjoy a family night out together, the StateLine Movie Time Drive-in Theatre allows visitors to bring their pets and offers a tasty menu of movie snacks via various concessions.

Located in Watauga County, North Carolina, Appalachian Ski Mountain is northwestern North Carolina’s oldest ski resort, featuring 12 slopes in the Blue Ridge Mountains reaching a peak elevation of 4,000 feet, as well as lodge accommodations, a restaurant, and a shopping area. Appalachian Ski Mountain is the second ski resort to stand at its current location, the first being Blowing Rock Ski Lodge, which was opened in 1962 by M.E. Thalheimer.

Six years later, the resort closed as a result of bankruptcy, and its land was purchased at public auction in December of 1968 by Grady Moretz. Moretz began the process of replacing chairlifts the following year and made major renovations to the resort’s existing 12,000-square-foot lodge, including the expansion of the lodge’s restaurant and the addition of a gift shop. The resort partnered with the French-Swiss Ski College in 1970, which offered an accredited ski college program and brought a number of skiing luminaries to the resort, including Olympic gold medalist Jean Claude Killy. Major renovations continued throughout the late 1980s and early 1990s, including the addition of several Doppelmayr quad chairlifts and an outdoor ice skating rink.

The resort’s Base Lodge, designed in 1962 by architect William P. Reinhardt, is constructed to evoke an old-world Bavarian-style lodge. Located at the base of the resort’s slopes, the lodge complex encompasses 46,000 square feet and offers a variety of amenities for skiers and non-skiers. A Slopeside Restaurant offers classic American fare with healthy options and daily specials, and a large stone fireplace provides relaxation after a long day at the slopes. A 200-foot Observation Deck also provides views of the surrounding Blue Ridge Mountains. An Alpine Ski Shop offers sales and rentals of high-quality ski equipment and apparel, and an Appalachian Gift Shop carries skiing-themed souvenirs and apparel. The lodge is a smoke-free facility and offers complimentary wifi to all visitors. Dressing rooms, lockers, clothing dryers, and a video game arcade are also offered.

The resort’s Ice Skating Rink is the only Zamboni-maintained outdoor rink in the state of North Carolina, offering views of the ski slopes and the nearby Blue Ridge Mountains. The rink is fully lit for nighttime skating and offers hockey and figure skate rentals. A rinkside bonfire serves as a resting place for skaters to warm up or an observation area for non-skating visitors. A Lodge Nursery is also offered for children ages 1-4, providing lunches and safe play while adults ski the slopes.

A variety of lodging options are offered by the resort, including four chalet facilities located within a few minutes of walking distance from the lodge facility. Lodging accommodations sleep between eight and 14 guests and offer amenities such as gas fireplaces and grills, remote control televisions with DVD players, complimentary wifi, and fully-equipped kitchens and laundry rooms. Reservations must be made through the resort’s Reservations Office and require an advance deposit. Electrical hookups for RVs and motorhomes are also provided.

Several skiing and snowboarding clubs are headquartered at the resort, including an Appalachian Junior Race Team for skiers ages 4-18 and an Appalachian Snowboard Club for riders ages 7-18. Midnight Blast Weekends at the resort offer late-night skiing sessions throughout the season, including special Holiday Midnight Blast Session events. Moonlight skating is also offered on New Year’s Eve at the facility’s ice skating rink.

Surrounded by the Blue Ridge Mountains in the heart of Western North Carolina, Chetola Resort at Blowing Rock is an inviting mountain resort that offers a tranquil escape from the city.

Set on 87 acres of pristine wilderness and forestland, Chetola Resort offers luxurious accommodations, fine dining, exceptional meeting and conference facilities, and an array of recreational pursuits to enjoy. Located adjacent to a 3,600-acre National Park and just a short walk away from a quaint mountain village, this comfortable, home-away-from-home resort has something for everyone.

Named after the owner of Chetola Resort, the Bob Timberlake Inn features individually themed and decorated suites, which are themselves named after prominent local that have played a role in the growth of the Resort. The luxurious bed and breakfast style Inn is decorated with rich tapestries and artwork, thoughtful accessories and charming mementos, all of which add to its elegant appeal. While guest rooms are individually decorated, all rooms feature standard amenities, including flat screen televisions, DVD Players, fireplaces, in-room safes and private bathrooms with whirlpool tubs and plush robes.

Timberlake’s Restaurant serves an inspired menu of American cuisine with an international twist in an elegant and relaxed setting. The restaurant features three dining rooms, an intimate wine room and a broad patio for alfresco dining, and the charming Headwaters Pub is just next door. The menu features a variety of delicious dishes such as freshly prepared salads, savory shrimp, pan-seared duck and roasted Carolina quail, along with a delectable range of desserts. Complimentary breakfast is served every morning at Timberlake's Restaurant, which also hosts a variety of special events throughout the year.

Headwaters Pub boasts a traditional pub-style setting with warm, dark interiors, historic photographs lining the walls and a comprehensive menu of craft and imported beers, aperitifs, cocktails, fine wines from around the world and regular favorites such as cappuccinos and coffees.

Chetola Resort offers an array of first-class amenities and facilities ranging from an exclusive spa and wellness center and outdoor activities such as golf, fishing, and tennis to kids camps.

Facilities at Chetola include an indoor heated swimming pool and sunbathing deck, a dry sauna, tennis courts, ping pong tables and both an indoor and outdoor playground for children. A fully-equipped fitness center offers an array of equipment, as well as yoga, Pilates, and other classes, while the fully stocked lake is perfect for canoeing, kayaking or fishing.

The nearby Highlands Sports and Recreation Center offers challenging fitness classes, supervised kids camps, and a variety of recreational and outdoor pursuits. There are also several superbly maintained hiking and mountain biking trails in the area.

Inspired by the beauty of the natural surroundings, The Spa at Chetola Resort features five soothing treatment rooms, including one couple’s treatment room, a relaxation room complete with crackling fireplace, a salon-style nail treatment area, and the Swan Bar for refreshments. Spa services include a range of massages and massage therapies, body treatments, skin care and facials and salon services, such as manicures, pedicures, cosmetic applications, and hair styling.

Chetola Resort features a variety of meeting rooms, indoor and outdoor event spaces and function areas for all types of gatherings. Venues range from the picturesque lakeside setting of Peninsula Point or the exquisite waterfront Arbor by the Lake to the elegant Evergreen Room with its floor-to-ceiling stone fireplace or the richly decorated historic Timbers Room.