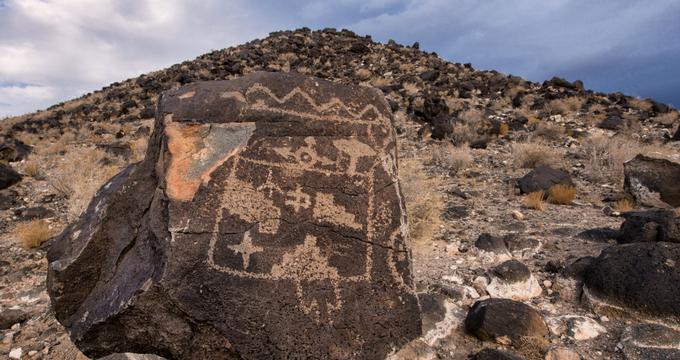 Petroglyph National Monument is a day use public park in Albuquerque, New Mexico that allows for hiking in the canyons and Volcanoes Day Use Area where visitors can see petroglyphs carved into the rock by Native Americans and settlers 700 years ago.

Petroglyph National Monument is managed by the National Park Service and is the largest site for American Petroglyphs found in the United States with over 24,000 images. The protected area has been made into a day use park for the public that is open for hiking from 8am-5pm daily.

The Petroglyph National Monument became part of the National Park Service in 1990. Recommended visiting times are early morning or later afternoon as temperatures are known to be in low 100’s during the middle of the day during summer months. There is no smoking allowed in the park and fire restrictions throughout the dry parts of the year. More information on restrictions and regulations can be found on the National Park Service website including vehicle parking charges.

Visitors hiking in the Petroglyph National Monument Park should expect to spend 1-4 hours exploring the canyons and volcanic rock formations in the area. The ecosystem in the canyon is volcanic escarpment and sand, creating a desert environment with many insects, bird, reptiles, and plants that visitors can encounter. The Visitor Center has a complete list of the various flora and fauna that can be found in the area. Visitors are expected to stay on the trails at all times and not touch any petroglyphs as body oil can degrade the images.

Boca Negra Canyon- This area of the monument is managed by the City of Albuquerque and contains three self-guided trails from Mesa Point, Macaw, and Cliff Base. Visitors walking all three trails will be able to hike in under an hour and view 100 petroglyphs from the trails. This area is the most heavily visited and is the only area with restrooms, water access, and picnic tables and shelters. An unpaved trail is located in the upper region of the canyon and is a much more strenuous and secluded hike suitable for experienced hikers.

Rinconada Canyon- Binoculars are recommended for seeing the 300 petroglyphs in Rinconada Canyon. Visitors will hike across sand dunes with a 2.2 miles round trip distance that is moderately strenuous. These trails are not paved and feature prehistoric petroglyphs and remnants of volcanic eruptions from up to 200,000 years ago. There is no water in this canyon but a vault restroom is available. Rattlesnakes are also frequently encountered in this canyon and should be avoided.

Piedras Marcadas Canyon- This area of Petroglyph National Monument has the largest collection of images at nearly 400 visible from the unpaved trail. The Piedras Marcadas trail is an easy hike with no water access or restrooms, however, leashed pets are allowed on this trail unlike the others in the park.

Volcanoes Day Use Area- The parking lot at the Volcanoes Day Use Area don’t open until 9am, an hour later than the rest of the park and will close during bad weather. Parking is available outside of the gates for before and afterhours access to the area that is an easy to moderate hike. There is an overlook at JA Volcano that is a 1 mile round trip as well as a two-mile path called Vulcan Volcano Loop that is moderately strenuous and two miles from the overlook with a gradual incline.

Many events are held at the Petroglyph National Monument that celebrate the culture and history of the Native Peoples of the region and early Spanish settlers that created the petroglyphs. Some of the events include blanket weaving demonstrations, performances from local groups at the visitor center amphitheater, presentations by the Navajo Code Talkers from World War II and many other educational and cultural experiences. Event details can be found on the Petroglyph National Monument Facebook page.

More Things to Do in Albuquerque, New Mexico

Best Things to Do in Alamogordo, NM: Shroud Exhibit and Museum