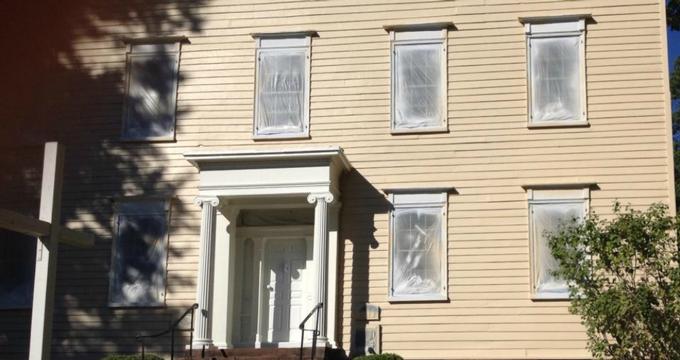 The Montclair History Center is a nonprofit organization that is dedicated to the study and promotion of local history and the preservation of four historic homes in Montclair, New Jersey; as well as a partnership with Montclair Community Farms Coalition to produce a microfarm.

The original purpose of the founding of The Montclair History Center in 1965 was to preserve the Israel Crane House. This landmark home was designed in the Federal Revival style in 1796 and was moved from in original location on Glen Ridge Avenue, to where it now rests on Orange Road right next to the Nathaniel Crane House (1818) which was donated to the Montclair History Center in the 1970’s by the Sampson family. The two homes were turned into public Crane House Museums and spaces for educational demonstrations, including having even once served as a YWCA for the African American community in the 20th century.

The Clark House is also located on Orange Road and was purchased by the Montclair History center in 1984. This home is a newer build than the Cranes homes having been built just before the turn of the 19th century in 1896 and is used as the Terhune Research Library and also houses several administrative offices. The last home acquired by the Center was the Evergreens which was donated in 1997 by Molly Shultz. The only home not on Orange Road, Evergreens is found on North Mountain Avenue and has been left unchanged for 100 years and still holds collections belonging to Charles Shultz, a late Montclair Banker, in science, art and travel.

The Crane houses are open the 2nd and 3rd Saturdays of every month from 1 pm to 4pm.

The Shultz House is open the 3rd Sunday of each month May through December from 1 pm to 4pm .

The Albert P Terhune Library, located in the Clark House on Orange Road, is open during Montclair History Center Office Hours, Tuesday through Friday 8:30 am to 4:30 pm.

Crane House and Historic YWCA Museum- First belonging to Israel Crane, a wealthy, young business man, this mansion was located on over 80 acres of farm land stayed in the Crane family until it was bought by the YWCA in 1920. This YWCA was the only one in America that was not affiliated with a white YWCA, as they were segregated at the time. In August of 1965, the YWCA donated the house to a group of preservationists, who founded The Montclair History Center to save the home, and the home was moved to Orange Road where restoration efforts were started. These efforts included making the home reflect life as Crane’s family would have known it and recreating a working hearth kitchen that would have been true to 1937 building designs.

Nathaniel Crane House- Nathaniel Crane, cousin to Israel Crane, built his farm house in 1818, but parts of the home date back as far as 1731. The home is made from solid oak as is fastened using all wood joints rather than nails. The home remained in the Crane family for only one generation and was sold in 1851 with 25 acres of land to a man named Stephen Paul. The home was purchased and sold several more times until 1894 when it was moved it its Orange Road location where it was used by its newest owner, Dr. James Henry Clark Jr. as a carriage house or barn. After being purchased in 1962 by Dr Martin Sampson, they donated the home in 1974 to The Montclair History Center where it was moved to be on the property of the Israel Crane House, less than 80 feet South.

The Nathaniel Crane House is used as a visitor’s center today and is home to an exhibit of a 19th century general store on the first floor that is a replica of what would have been used in the days of Israel and Nathaniel Crane. The second floor has a replica of a 19th century school room that illustrates the education setting of the Montclair in this time. The home is not completely open to the public. During tours the home’s interior can be viewed through a glass window to be able to see the simple framing techniques that were used in the construction.

Clark House and Albert P. Terhune Archives and Library- The Queen Anne Style two story home was built by Dr. James Henry Clark and his wife in 1894 on Orange Road. Clark’s family had links to signers of the Declaration of Independence and Mayflower Compact as well as Civil War heroes. The home was occupied by members of the Clark family for almost 100 years until 1962 when the Sampson’s purchased the home with The Nathaniel Crane House. The Montclair History Center acquired the house in 1985 and uses it today for educational purposes and as a research center. The Albert P. Terhune Archives and Library preserves local resources that are unique to the Montclair region such as tax and county maps, history books, vintage photos and year books, oral histories, Crane family genealogy, scrapbooks and more.

Charles Shultz House (Evergreens)- The newest of the four homes, the Evergreens was built in 1896 by the Hoboken Bank President Charles S. Shultz. The home is 3-stories tall with 21 rooms that have been left unchanged in 100 years. The family’s belongings and collections including furniture, books, journals, kitchen wares, are all still right where they were left as those expected to be used again. The home is surrounded by numerous evergreen trees and sits on a picturesque hill with a view of New York City.

Microfarm- The Montclair History Center partnered with The Montclair Community Farms Coalition to produce a Microfarm on Orange Road. This Microfarm brings produce to affordable housing communities through a mobile farm stand every summer to sell fresh produce to low income seniors for a fraction of a cost that they could find at the super markets. There are many ways that the farms serve to involve and engage the community through hands-on resources to teach visitors about urban farming, sustainable agriculture, affordable food, healthy lifestyles and more. There are also smaller farms and gardens located at schools and co-ops throughout Montclair. The Microfarm is always looking for volunteers during the growing and harvesting seasons.

The Montclair History Center is committed to promoting and preserving the rich local history of Montclair and offers several programs from kids of all education level from preschool through college. Groups from a few students up to 50 can be accommodated at one time.

Our Little Historians- Preschool-K. First time history lesson that includes story time, scavenger hunt, fireside chats and a visit to the chicken coops. This tour is a fun, quick one hour tour for little ones.

Life in Early New Jersey- Grades 1-4. Go back 200 years to experience what life was like to early American settlers. Tour includes the Crane House and a hearth cooking demonstration, students will also compare what learning was like in a 19th century school room before ending the tour in the farm. 2 hours long.

Discovering Black History Through Primary and Secondary Sources- grades 7-12. Students explore documents that are over 200 years old to discover the history of African Americans in Montclair using primary and secondary sources such as slavery bill of sales and memoirs.

Homeschool Programs- Homeschool programs run seasonally at Montclair History Center and parents can call ahead if interest in a program to find out more about dates. More information about homeschool classes is available on the website and registration is required as classes fill up quickly and there are maximum class sizes. Classes include crafting, hands on projects, learning about history without textbooks, the civil rights movements, learning how to use archives, research and discussion based assignments, and more.

Classroom Lessons- The Montclair History Center provides resources that engage 11-12 grade students in lessons on discrimination and segregation in the first half of the 20th century. Lesson plans are available to be downloaded on the website and include lessons on Jim Crow and Segregation in New Jersey and Suburban Housing Discrimination.

Farm Camp- Montclair History Center partners with The Montclair Community Farms and Rutgers Cooperative extension 4-H to host summer camps at the Microfarm. Summer Camps are divided by age groups and include themes such as Down on the Farm, Homegrown living, Farm to Table, and Back to the Future: Learning from the past to make a better future.

Girl Scouts- The Crane House and Historic YWCA Museum offers many opportunities for Girl Scouts to earn badges through programs that educate on the life of occupants of the home, cooking hearth demonstrations, visiting the chicken coops, and community gardening projects. Projects can be customized for badge requirements and each project includes a 2 hour visit and 6 scout minimum.

Back to: Best Things to Do in Montclair, New Jersey

10 Best Things to Do in Wildwood, NJ

25 Best Things to Do in Princeton, New Jersey