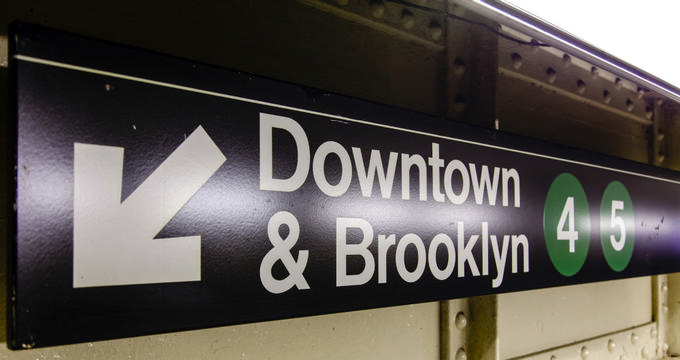 When traveling to New York City, you have the choice of three major airport: JFK, LaGuardia, and Newark. All three of these airports are immensely busy throughout the year and have their own unique advantages.

Newark, or to give it its full name, Newark Liberty International Airport, is the only one of the trio to be located in the state of New Jersey and is actually the main airport in NJ. It's also one of the most convenient for tourists or travelers wishing to visit the New York City borough of Brooklyn.

The most populous borough in all of New York City, Brooklyn is located on the western end of Long Island and is home to some of the city's most famous landmarks like the Brooklyn Bridge, the Soldiers' and Sailors' Arch, and Coney Island. It's an increasingly popular part of NYC to visit, with its own unique charms and personality that set it apart from the other boroughs.

There are plenty of things to do in Brooklyn, but before you worry about any of that, you need to actually get there. Fortunately, if you fly into Newark Airport, you'll have many different options to transfer from Newark to Brooklyn. In fact, getting to Brooklyn from the airport is a lot easier than you might think.

Getting to Brooklyn from Newark Airport

Brooklyn is by far one of the most popular NYC boroughs to visit, beloved by tourists and travelers of all ages and backgrounds. People visit Brooklyn from all over the world, and many choose to fly into Newark Airport to make the transfer as easy as possible. While JFK Airport is located to the east of Brooklyn, Newark is situated to the west, meaning you'll have to cross over the Hudson River to get there. Fortunately, the journey is very simple, with a wide range of options to suit every possible budget. Let’s take a look at the best ways to get from Newark to Brooklyn.

Getting the Train and Subway from Newark to Brooklyn

One of the most iconic parts of the Big Apple is its subway system, so this is the first port of call for many tourists and travelers arriving at one of the city's major airports. Getting to Brooklyn from Newark via subway or train is a smart and budget-friendly option. It should take around one and a half hours in total, but can take a little longer depending on the time of day and how busy the city happens to be. A train ticket costs around $15 and subway tickets start at just $2.75. The first step for this journey is to ride the 'AirTrain' at Newark, which will take you over to the Newark Liberty Airport Station.

It's important to note that this train doesn't go directly into the city, so you will need to change afterwards. Upon arrival at Newark Liberty Airport Station, you can buy train tickets to get to New York Penn Station. The station itself is relatively easy to navigate, with multiple signs providing up-to-date information on the latest trains, times, and platforms. The train from Newark to Penn will take about half an hour in total. At that point, you'll be in the heart of Manhattan and have direct access to the subway system, able to buy your subway tickets immediately and choose your route to Brooklyn. There are multiple lines connecting Penn to Brooklyn, so you can take any of the A, C, and E blue MTA trains or the 1, 2, and 3 red line trains.

Getting the Bus to Brooklyn from Newark

Let's focus on the Express Bus first: this is the 'Newark Liberty Airport Express' which leaves directly from the airport and heads over to Manhattan, calling at several places like Grand Central Station and the Port Authority Bus Terminal. You can hop off at any of these stops and then buy a subway ticket to get over to Brooklyn.

As for the Shuttle Bus, this is often one of the fastest options to get to Brooklyn from the airport. The bus can be found just outside the airport exit and, just like the Express Bus, will make several stops in Manhattan, allowing you to hop off at a place like Grand Central and use the subway to continue your journey.

Getting Taxis and Cars from Newark Airport to Brooklyn

The final option is to ride along in another vehicle, either a taxi or a private transfer car. Taxis will be cheaper, but you'll still need to hand over around $110 to get all the way to Brooklyn and the length of the journey is highly dependent on New York traffic. Many taxis can be found outside Newark Airport, so this is one of the most convenient options and doesn’t' involve any waiting around.

On a good day, this is the fastest option too as it will take you directly where you need to go, and many taxis can be in Brooklyn from Newark within an hour. As for private transfers, these may cost up to $120 or even more at times, but are quick and easy like taxis. Private transfer rides from the airport to Brooklyn, or any other NYC area, can be booked online, with the driver picking you up straight from the airport and taking you wherever you need to go.

Of course, one of the simplest options to get from Newark airport to Brooklyn, or anywhere else around New York City and the surrounding area, is to simply rent a car for yourself. Car rentals are located directly at the airport, with many of the biggest brands operating at Newark, allowing you to choose the right vehicle for you and your fellow travelers at the best possible rate. Renting a car has a lot of advantages, especially if you're traveling with a lot of luggage as it can be frustrating and difficult to get around the subway with suitcases and bags. From Newark, all you need to do is head out onto the New Jersey Turnpike and follow the signs to reach Brooklyn quickly and easily.

25 Best Things to Do in Manhattan on a Date