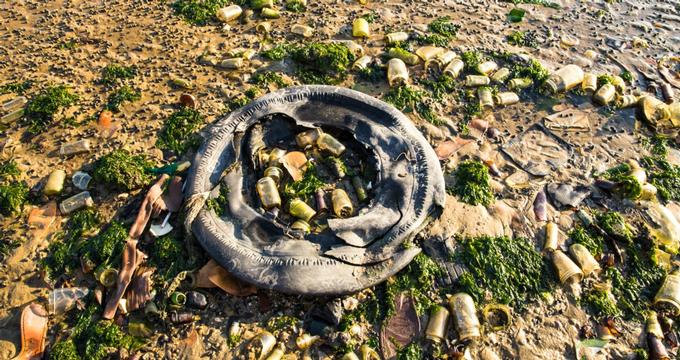 Let that name just roll around your mouth for a minute; doesn’t it just conjure an image of beauty and serenity? It doesn’t? Suppose not; it shouldn’t do either. The place is a trash heap. Literally!

The bay has gained a level of notoriety amongst urban explorers due to it being the filthiest, most dilapidated, uncared for, disused, and forgotten-about garbage pile in all of New York. Supposedly, it’s a National Park as it’s under the supervision of the NPS and part of the Gateway National Recreation Area, which is a series of campsites, wetlands, and monuments in Eastern Brooklyn, Queens, and New Jersey.

This might be the only beach in America where even on a hot summer’s Sunday you can quite rightly expect to be the only visitor. The sand is saturated with shattered glass to the point that when a waves rolls in, it plays a tinkling death rattle over the broken bottles. It’s a strange and screeching serenade and definitely a little spooky. The bottles have collected over the years of the bay’s use as a garbage dump and they aren’t even the strangest thing you can expect to find on a visit here.

Dead Horse Bay takes its name from the fact that it was once adjacent to a glue factory and you can still find a millstone that was used to grind the horse bones along the Millstone Trail, which runs along the bay. As well as the glass that litters the beach, expect to come across plenty of sun-bleached horse bones, which have lasted even to this day.

In order to access the bay, you first have to wade through some genuinely lush, verdant green paths and it doesn’t take long for the noises of traffic to fade and you can almost forget you’re in New York, let alone Brooklyn. However, the illusion is shattered like the glass at your feet as you emerge from the greenery onto the beach.

Other exciting finds along the bay’s sandy shores are likely to include abandoned or disused boats, crab carcasses, ancient – almost archeological – trash from years gone by, and maybe, if you’re lucky, a ragged clipping from the 1899 Brooklyn Daily Eagle in which Theodore Roosevelt called the island a “nuisance of the worst kind.”

Dead Horse Bay can teach us a great deal about humanity; it has suffered unforeseen collateral damage from several different industries. There was even an attempt to use the amassed trash to build and extend the land mass. Representing layers and layers of afterthought in city planning, it is an outcropping, just enough out of sight to be out of mind! It stands as monument to the result of a lack of foresight.

Yet even amongst the trash there is a glimmer of hope to be seen by the right pair of eyes. Some come to marvel at the beauty of its repugnance, while others arrive to collect odd curios and pieces of the trash to be repurposed and used in New Wave art projects. As it’s unlikely the beach will be cleaned up anytime soon and there are never any queues, you can take your time in ticking this one off the bucket list.