Things to Do in Albuquerque: Unser Racing Museum 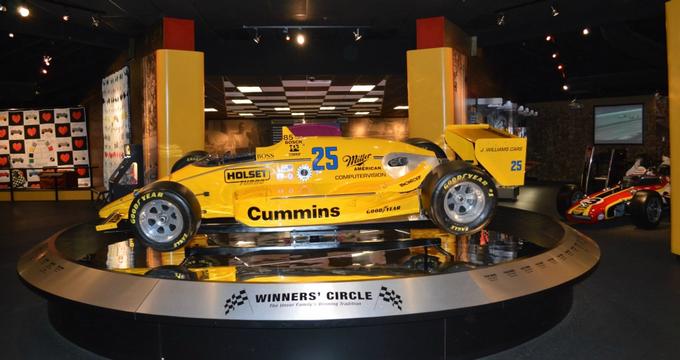 Located in Albuquerque, New Mexico, the Unser Racing Museum is dedicated to the legacy of the New Mexico native racing family the Unsers, whose nationally-known competitive racing accomplishments span several generations throughout the 20th and 21st centuries. Louis and Marie Unser originally immigrated to the United States from Switzerland, settling in the Colorado Springs area near Pike’s Peak mountain and giving birth to three sons, Louis Jr., Joe, and Jerry.

In the early 20th century, Louis Jr. developed an interest in the new technology of automobile engines and encouraged his brothers to explore the technology with him. In 1915, the three brothers were noted for their accomplishment of scaling Pike’s Peak with a motorcycle and sidecar, an accomplishment that drew the attention of the Colorado City Police, who recruited them to teach officers to drive motorcycles. After the inception of the 1916 Race to the Clouds motor race by area resident Spencer Penrose, the Unser brothers became regular entrants into motor racing competitions, with Louis Jr. earning the nickname the “Old Man of the Mountain” for his nine Pike’s Peak Hill Climb wins.

Though the family’s racing ambitions were temporarily abandoned after Joe was killed in an automobile crash near Denver, ambitions resurfaced with the next generation of Unsers after Jerry moved his family to the Albuquerque area in 1936. All of Jerry’s three sons, Jerry Jr., Bobby, and Al, became professional indy racecar drivers and competed at the famed Indianapolis 500 race in Indianapolis, Indiana. Though Jerry Jr. died during a practice crash before the 1959 race, Bobby was the victor of the race in 1968, 1975, and 1981, and in 1987, Al became the second of only three racers to ever win the the race four times. The Unsers’ racing legacy has continued throughout the late 20th and early 21st centuries with family members Johnny, Robby, Al Jr., and Al Unser III.

The Unser Racing Museum is operated as a nonprofit organization celebrating the Unser family’s racing accomplishments throughout the 20th and 21st centuries, spanning the family’s history from Louis’ early racing days in Pike’s Peak through Al Unser III’s recent accomplishments on the Indy Lights series, including his 2004-2006 Toyota Atlantics Championship victories. The museum is constructed in the shape of a steering wheel and offers a variety of exhibits about the history and technology of racecar driving, including a collection of historic racing vehicles.

Four generations of racecars driven by the Unser family are showcased, including original vehicles used by the family in Pike’s Peak and several of the family’s Indianapolis 500-winning vehicles. Other notable vehicles on display include a 1931 Duesenberg used for historic car races, three vintage motorcycles used in board track races in the early 20th century, and the winning cars driven by Tony Stewart in the 1993 Copper World Classic and by Dale Earnhardt Jr. in the 2012 Quicken Loans Michigan 400. A new automobile annex also contains an extended collection of restored antiques and pace cars.

Other exhibits within the museum include a trophy room, which displays trophies and plaques won by members of the Unser family and other racing luminaries, and a library with an extensive collection of volumes spanning the complete history of automobile racing. A racing simulator allows visitors to take to the driver’s seat during a virtual race, and a number of interactive digital kiosks offer exhibit exploration and educational information. Displays of historic racing uniforms and original racing-themed artwork are also featured. A gift shop also sells a variety of racing-themed apparel, memorabilia, and souvenirs.

The museum is open daily, with the exception of major national holidays, and offers discounted admission rates for children, seniors, and military members. Guided tours of the museum are offered for individual visitors and small groups, including curriculum-incorporated tours for elementary and secondary school groups. Volunteers are accepted on an ongoing basis, including opportunities for volunteers to become tour docents.

The museum’s Jerry’s Garage facility, located in the Village of Los Ranchos de Albuquerque, is available for private special event rental for up to 250 guests, including weddings, receptions, and business conferences. Professional staff is available for event planning, and a list of preferred caterers is provided, offering a variety of price ranges and cuisines. Onsite audiovisual services are also offered at the facility. The museum sponsors an ongoing brick fundraising campaign, offering engraved bricks placed at the museum’s entrance for a donation fee. A Sanchez / Silva Scholarship Fund offers funds to promising young New Mexico members of the automotive industry, and museum membership offers a variety of benefits, including free museum admission and subscription to a periodic newsletter. Public special events are held regularly, including a Santa Fe Concorso event featuring rare and exotic cars and motorcycles.

More Things to Do in Albuquerque

Things to Do in New Mexico: Ghost Ranch

Best Things to Do in Taos, NM: Taos Art Museum at Fechin House