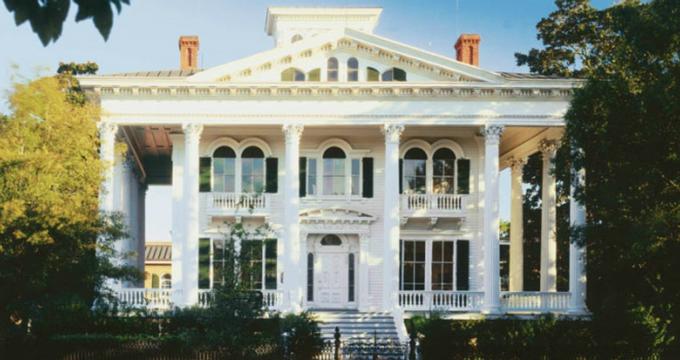 © The Bellamy Mansion Museum of History and Design Art

The Bellamy Mansion Museum of History and Design Art is a historic mansion with additional buildings and garden located in downtown Wilmington, North Carolina. The museum is a non-profit educational institution and has a focus on historic preservation, preservation methods and architectural history. The 22 room mansion has been lived in by several generations of the Bellamy family and has seen 150 years of historical and social change over the years. Now restored to its former charm Bellamy Mansion, the Slaves Quarters, Carriage House (Visitor Center) and gardens are open to the public. Since the 1970s the mansion and grounds have been maintained by the charitable corporate Bellamy Mansion, Inc as instructed by current day Bellamy family members. The museum is open Tuesday to Sunday and requires an admission fee.

The Bellamy Mansion House measure 10,000 square foot and can usually be toured on all five floors, though sometimes renovation work may close certain rooms to the public. Dr. Bellamy the original owner of the house decided on hiring James F. Post to undertake the architecture of the mansion and he in turn employed an assistant, Rufus Bunnell. The architecture of the Corinthian columned Bellamy Mansion is based on both an Italian and Greek Revival style and is a prime example of Antebellum architecture. It was constructed by freed black artists and enslaved carpenters in 1859 on the Eve of the Civil War and took two years to finish.

Visitors can walk around the mansion and see the furniture, plush rugs and classical décor as well as many objects soaked in history such as African American artifacts and Civil War paintings. Small art exhibits are placed around the interior and visitors can read and learn about family life, life as a child in the mansion and life as a slave worker. The mansion includes revolving small exhibits of art too. If visitors decide to join a tour they can watch a 12 minute video introducing the property and then walk around the home hearing information, facts and the detailed history of Bellamy's, slaves, buildings and grounds from the knowledgable tour guide.

The Carriage House which was renovated to be in keeping with the mansion is now known as the Visitor Center. In the Visitor Centre, the public can buy tickets from the admissions desk, begin a walking tour with a guide and browse the Gift Shop which has a range of souvenirs, books and gifts.

The Slave Quarters were originally built in 1860 to house the slave workers of Bellamy Mansion. The building is three rooms wide and one room deep with a red brick appearance and some features of Greek Revival style. Visitors can explore the two story building which is ventilated and quite spacious inside. The bottom floor has a kitchen, laundry room plus two privies and the second floor contains three chambers. The building portrays quite an average representation of slave as found in the American South at that time.

The gardens were originally created in 1861. Mrs Bellamy had a great interest in plant botany and was thought to do some upkeep on the garden but after hear death in 1907 its splendor began to face. After much maintenance, tending and a complete renovation and redesign the garden opened to the public. The re imaged design was of a Victorian style elliptical garden with an ornamental flower bed and a range of native plants. Some of the paths are set in white shell and the carefully trimmed hedges create interesting visual textures. Just some of the flowers on display are snowdrops, lilies and magnolia trees dating back 150 years.

The mansion hosts many workshops and lectures through the year as well as a variety of exhibits which change regularly. Both adult and school group tours are available with pre booking. Wilmington’s Historic Homes offers ticket combinations including entry to Bellamy Mansion Museum as well as other historic homes and local attractions.

The Mansion's Pathway to History is an opportunity for supporters to have theirs or a loved one's name etched onto a brick which is then displayed on the entrance to the carriage house. The mansion hosts an event called Family Fun Day and Bellamy Mansion Museum Camp where children can learn about architecture and history as well as take part in games and activities.

Back to: Fun Things to Do in Wilmington, North Carolina

Things to Do in Wilmington, North Carolina: Poplar Grove Plantation