Things to Do in Montana: Big Sky Resort 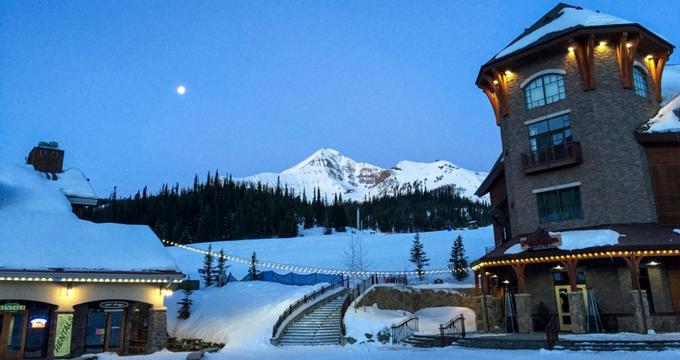 Located in Madison County, Montana an hour south of the city of Bozeman, Big Sky Resort is a ski resort offering more than 5,800 acres of skiing terrain, dubbed the “Biggest Skiing in America.” The resort was opened to the public in December of 1973, offering a gondola and three chairlifts to skiing elevations along the eastern side of the 11,166-foot Lone Mountain.

Big Sky Resort was the idea of Montana resident Chet Huntley, the co-anchor of NBC News’ evening broadcast throughout the 1950s and 1960s. Following Huntley’s death in 1974 after a battle with cancer, Boyne Resorts acquired the resort and steadily added to its attractions over the next several decades, tripling terrain areas for skiing, snowboarding, and other winter sports activities. Additional lifts and gondolas were added, including the Lone Peak Tram, installed in 1995, which was designed to take skiiers to the summit of Lone Mountain. Several new facilities were added to the resort area in the 1990s and 2000s, including the Yellowstone Conference Center, the Village Center Complex, the Summit Hotel, and the Shoshone Condominium Hotel, and major renovations were completed on the facility’s Mountain Village and skiing areas. In 2013, the resort merged operations with the nearby Moonlight Basin ski resort and acquired 200 acres along Spirit Mountain previously held by private club Spanish Peaks, making Big Sky the second largest ski resort area in the United States.

Today, Big Sky Resort offers more than 5,800 acres of skiing terrain along the slopes of Lone, Andesite, and Spirit Mountains, divided into a variety of areas for beginner, intermediate, and expert skiiers. The facility is best known for its Lone Peak Tram, a 15-passenger tram which opened to the public in December of 1995. The addition of the tram increased the resort’s size by 50%, adding 1,200 skiable acres and an additional 4,350 of vertical height. The Doppelmayr lift, created by Alaska’s Matrix construction firm, runs two cabins in alternating directions across a distance of 2,828 feet, offering access to some of the most difficult ski terrain in the United States. Intermediate skiiers may also access groomed blue runs from the tram, and non-skiiers are welcome aboard to enjoy 360-degree views of the nearby Teton Mountains and Yellowstone National Park.

A number of other gondolas and chairlifts provide access to a variety of elevations throughout the resort area, including the Ramcharger Lift, which climbs to elevations of 8,700 along Andesite Mountain, and the six-seat Powder Seeker Lift, which offers specialty heated seats. Seven unique terrain parks are offered, including the beginner Cowpoke and Explorer areas, the intermediate Maverick Park and Swift 2.0, the expert Peacemaker and Swifty areas, and the natural Cache terrain area. Areas for snowboarding and snowshoeing are also offered.

During the summer months, the resort is open for summer outdoor activities, including archery, rock climbing, and skeet shooting. An award-winning 72-par Big Sky Resort Golf Course, designed by champion golfer Arnold Palmer, operates May through October, offering 18 holes along the West Fork of the Gallatin River. An Adventure Zipline Tour, ranked one of the best zipline courses in the country by USA Today, offers four course lines at elevations of 150 feet above the ground, including a racing Twin Zipline. Mountain biking, horseback riding, and whitewater rafting adventures are also offered, and a summer Lone Peak Expedition offers scenic rides on the Lone Peak Tram.

Accommodations are offered at several hotels within the resort’s Mountain Village complex, including the original Huntley Lodge, the luxury Summit Hotel high-rise, and the Shoshone Condominium Hotel. Suites and condominiums are offered at the Village Center and Skycrest and Stillwater Condominiums, which offer dramatic views of Lone Mountain. Cabin, chalet, and lodge rentals are also offered throughout the resort area.

Ski equipment, apparel, and souvenirs are sold at stores within the resort’s Mountain Mall, including Montana’s only licensed North Face retailer. A 3,000-square-foot Solace Spa and Salon is located inside the Huntley Lodge, and several fitness centers, including the Shoshone Health Club, offer gyms, pools, hot tubs, and sauna facilities. More than 50 restaurants, cafes, and food vendors are located throughout the resort complex, including the Bunker Bar and Grill, located inside the golf course, the slopeside Carabiner lounge, and the mountaintop Everett’s 8800 restaurant. Family dining options include the Blue Moon Bakery cafe, Andiamo Italian Grille and Pizza Works, and the Huntley Dining Room, which offers the biggest breakfast buffet in the country. The facility’s 55,000-square-foot Yellowstone Conference Center also offers meeting and event space for up to 750 attendees and may be rented for business conferences, weddings, and other private special events.

More Montana things to do

Things to Do in Taos, New Mexico: Taos Ski Valley