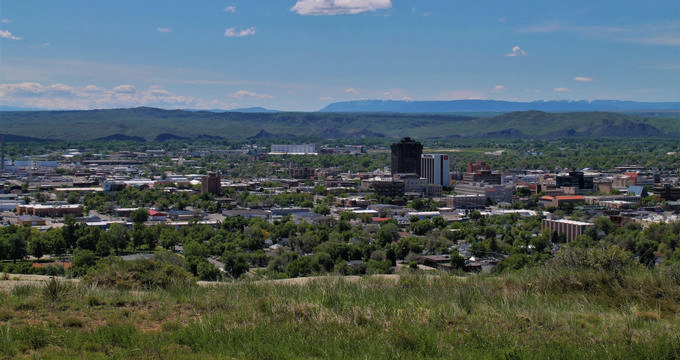 The seat of Yellowstone County, Billings is the biggest city in the state of Montana. The city can be found in the southern central part of the state and has various nicknames including 'Magic City' and 'City by the Rims', due to its unique rimrock sandstone formations. The city covers an area of 43.52 square miles and has an estimated population of around 111,000 people, with around 170,000 in the surrounding Billings Metropolitan Area. CDC information for travelers. Hours/availability may have changed.

A key commercial and cultural hub for the state of Montana, Billings is also one of the fastest growing cities in the state. The city of Billings, MT was founded in 1882 as a simple railroad town and was fittingly named after the Northern Pacific Railway president at the time, Frederick Billings. In its initial state, Billings was very small, with just a few buildings dotted around, but it began to rapidly grow and develop over time. The discovery of nearby oil fields helped boost the city's population, earning it the aforementioned nickname of 'Magic City' due to its speedy expansion and population rise.

Over the years, high rise buildings were constructed in the city and even as the oil industry began to die down, the economy of Billings began to diversify. The downtown area has seen significant development and renovation over the years, with many natural and man-made attractions for residents and visitors to enjoy including Zoo Montana, Yellowstone Art Museum, and the Chief Plenty Coups State Park, with other major sites like Yellowstone National Park and Bighorn Canyon National Recreation Area not too far away.

Elevation is one of the most important geographical statistics of any town or city. It can have an influence on the city's weather and is also an important factor in town planning and architecture. Elevation refers to the height of an area above or below sea level. The city of Billings, MT is situated at an elevation of 3,123 feet (952 m), which is much higher than many other locations around the United States, especially the towns and cities along the east and west coasts, which are mostly situated at elevations of 500 feet (152 m) or less.

You are reading "Billings (MT) Elevation" Back to Top

3.Climate and Things to Do in Billings, MT 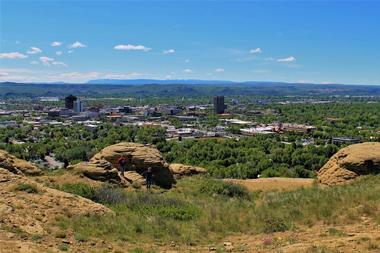 The city of Billings, MT has a humid continental climate with hot, dry summers and cold winters. Temperatures can approach and exceed 100°F (37.8°C) in Billings during the warmest periods of the year and regularly drop below freezing point in winter. The daily mean temperature in July, the hottest month of the year, is 73°F (23°C), while the coldest month of the year, December, has daily mean temperatures of 26°F (-3°C). Snow can fall for large parts of the year in Billings, at any time from September through to May.

Billings isn't known as a touristic city but does still attract a lot of visitors as one of the biggest cultural hubs in the state of Montana. There are plenty of impressive monuments in the local area like Pompey's Pillar, Pictograph Cave, and the Chief Plenty Coups State Park, as well as man-made attractions like museums, galleries, high-rise buildings, and more. Various annual events and festivals are held in Billings each year including food and wine festivals, and some of the outdoor activities one can enjoy at Billings include hiking, climbing, skiing, fishing, and more.

You are reading "Billings (MT) Elevation" Back to Top

It was designed at a cost of $105,000, more than 20 times the national averages for homes at the time. The three-story building served as the residence for Preston Boyd Moss, a prominent Billings entrepreneur, businessman, and politician. Throughout his career, Moss developed the Billings Light and Water Power Company in cooperation with H.W. Rowley, organized the area’s first dial telephone company, and operated a newspaper that served as a forerunner for the Billings Gazette. He was also influential in the city’s irrigation development, sugar production, and educational network, and was involved in local meat packing and toothpaste production plants. Though his bid as the state’s Democratic candidate for the United States Congress proved unsuccessful, he remained a prominent citizen of Billings throughout his life until his death in 1947 at the age of 83.

Family members of the Moss family, including Moss’ wife, Martha Ursula Woodson Moss, their six children, and three servants, resided within the mansion for more than 80 years. In 1984, community efforts were organized to preserve the home as a historic site, and in 1986, the Billings Preservation Society, a community nonprofit organization, acquired the home through a lease agreement with surviving Moss family members. Through the work of the Preservation Society, the home was listed on the National Register of Historic Places.

Today, Moss Mansion is operated as a living history museum, offering guided and self-guided tours of the facility’s lower floors. The 28-room mansion is made of red sandstone and features a basement, solarium, and a number of intact modern amenities that were considered groundbreaking for their time, including a heated indoor plumbing system and a servant call button intercom. The home’s interiors highlight wood paneling, marble fireplaces and columns, and gold threaded walls, along with original fixtures and furnishings, including original interiors designed by Martha and quilts, needlepoints, and paintings created by Moss family daughters. Though the home’s ballroom and upper floor have been converted into office space for the Preservation Society, all rooms on the lower floors are accessible for visitors.

As a prominent historic home, Moss Mansion has been featured in a number of period feature films, including Son of the Morning Star and Return to Lonesome Dove. It is featured in a chapter of the Reader’s Digest book Great American Homes and in National Geographic’s Guide to America’s Great Houses, and has also been showcased on the A&E broadcast America’s Castles: The Great Frontier.

Guided and self-guided home tours are offered by the Preservation Society, though guided tours are recommended for a full visitor experience. All tours begin with a 13-minute orientation film, followed by exploration of the home lasting approximately one hour. On docent-led tours, offered on weekends throughout the fall, winter, and spring and throughout the week as part of extended summer hours, the history of the Moss family is narrated through the use of diaries, letters, and other items from the Preservation Society’s museum collection. All visitors may also explore the mansion’s grounds and gift shop at their leisure. Information is also provided regarding self-guided walking tours of the mansion’s historic surrounding neighborhood, including a map of other nearby historic homes.

Though stairs are required to view the home’s second floor, limited wheelchair access is offered within the home’s first floor and courtyard. Reservations for groups of 10 are more are required, including docent-led school tours for elementary and secondary school students, tailored to Montana curriculum standards. Reservations for standard guided tours are recommended during peak times, although self-guided tours may be embarked on at any time during operating hours.

Special Trunks and Treasures tours are offered periodically, providing a unique opportunity for access to the mansion’s third floor, as well as looks inside hidden home spaces such as closets and drawers. Christmas tours are also offered throughout the winter holiday season, beginning in mid-November. Trees decorated by local charities are showcased, and tour participants are given an opportunity to vote for People’s Choice award trees. Themed Murder Mystery evenings are held periodically, offering refreshments and group mystery-solving activities. Several annual special events are also offered, including a Haunted Maze and Midnight Edition Horror Theater event at Halloween and a SpringFest celebration.

You are reading "Billings (MT) Elevation " Back to Top

Located in downtown Billings, the Yellowstone Art Museum is the largest contemporary art museum in Montana. The Museum collects, interprets, exhibits, and preserves art with a focus on Montana and its surrounding regions, and aims to be a world-class cultural destination for all ages.

Established in 1994 as the Yellowstone Art Center, the Yellowstone Art Museum (YAM) was first based in the former Yellowstone County Jail, which was built in 1884. The museum was a result of a grassroots artist and community effort to introduce art into the community, and the building was renovated entirely through volunteer effort on behalf of this goal. The Yellowstone Art Museum, otherwise known as YAM, was the first museum in the area to focus on progressive and modern art rather than the then traditional genre of Western art and historical artifacts. Additions were added to the museum in 1916, and today the museum remains the only visual arts institution in the region.

The Yellowstone Art Museum features a growing permanent collection of over 7,400 of historical and contemporary regional artworks. The collection includes works by renowned artists such as Ted Waddell, Rudy Autio, Deborah Butterfield, John Buck, Patrick Zentz, Richard Notkin, Isabelle Johnson and Jaune Smith, as well as emerging artists. The Virginia Snook Collection includes the largest selection of works by illustrator and cowboy writer, Will James, as well as hundreds of Abstract Expressionism pieces in the museum’s Poindexter Collection of New York.

The Visible Vault was established in 2010 and is publicly accessible art storage facility that houses the Museum’s permanent collection in an innovative, open-plan design. The Visible Vault facility is also home to an artist-in-residence studio which has housed artists such as John Pollock, Brian Keith Scott, Tracy Linder, Brooke Atherton and Carol Spielman, whose works have also been on display in the museum.

The Yellowstone Art Museum offers a variety of art educational programs and opportunities, ranging from class and workshop programs, curriculum-based art education, lectures, gallery talks, and other special events. Classes and activities for children to develop their talent and skills are offered throughout the year, as well as Family Fun Friday Nights where families can create art together. The Young Artists’ Gallery is dedicated to showing and celebrating the work of the community’s budding artists in a variety of temporary exhibitions, while the Children’s Collection showcases the pieces that children voted for as being their best. Education programs for adults include monthly art classes led by regional artists, bead embroidery workshops, and drawing classes.

The Yellowstone Art Museum offers a variety of fun ways to get involved in the institution and its art throughout the year. Special events include the Art Auction, McDonald Family Free Day, Summerfair, National Coloring Book Day, Bridal Fair, Winterfair, Masquerade Party, and ArtWalk & Jam at the YAM.

The National Coloring Book Day is honored with a coloring marathon at the Museum where visitors can bring their coloring books and tools from home. The YAM also offers an artists’ coloring book with pages designed by different regional artists.

The ArtWalk & Jam at the YAM offers free admission to the museum for visitors who can explore the museum and its current exhibitions while listening to live music.

The Yellowstone Art Museum is located at 401 North 27th Street in Billings and is open on Tuesdays, Wednesdays, Saturdays from 10:00 am to 5:00 pm, Thursdays, and Fridays from 10:00 am to 8:00 pm and Sundays from 11:00 am to 4:00 pm. The Yellowstone Art Museum offers three basic tours for visitors, including an hour-long docent-led tour of the galleries, an hour-and-a-half tour of the galleries and a specially designed gallery inspired art activity, and self-guided tours of the museum. The Museum is home to the Raven’s Café d’Art, which serves an array of delicious seasonal cuisine and beverages.

Back to: Things to Do in Billings, MT

You are reading "Billings (MT) Elevation " Back to Top

25 Best Things to Do in Montana