Things to Do in St. Louis: Gateway Arch 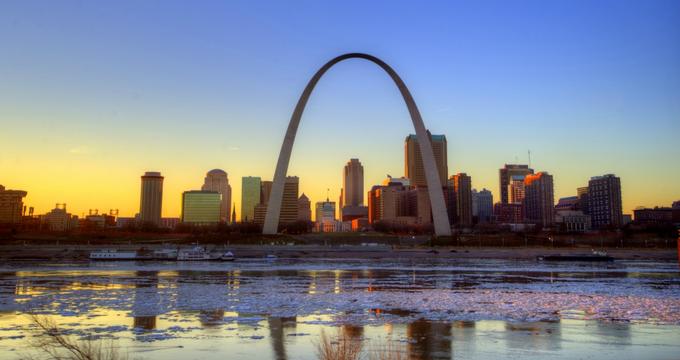 No other monument better evokes the spirit of the city than the St. Louis Gateway Arch in St Louis. Located amidst the Jefferson National Expansion Memorial, it has become as emblematic of American national identity as the Statue of Liberty and Mount Rushmore. Aside from the Gateway Arch itself, there is much else to see on the 91 acres dedicated to the monument. The grounds surrounding the arch as well as the Old Courthouse are just a few of the attractions that draw tourists to this landmark each year.

Completed in 1965 to commemorate Thomas Jefferson and the role of St. Louis in the development of the Western United States, the Gateway Arch is one of the city’s best known landmarks. Originally this monument was the brainchild of Luther Ely Smith, a well-known civic leader who saw this project not only as homage to the city’s history but also as a way of reviving the riverfront area of the city. Eero Saarinen’s design for the arch was selected during the national design competition, which took place between 1947 and 1948. After a few years spent perfecting Saarinen’s plans, the initial groundbreaking took place on June 23rd, 1959. Excavations began in 1961 and the last piece of the arch was secured into place by 1965. The fact that the whole project was completed on time, within budget, and without loss of life is a point of pride for the monument.

Two years after the completion of the arch, the trams that transport visitors to the arch’s summit were added alongside the visitors center. A few years later, the Museum of Western Expansion was added beneath the arch. The arch celebrated its 50th anniversary on October 28th, 2015. Plans for the future of the Gateway Arch and the surrounding grounds include the completion of a continuous greenway which will connect Luther Ely Square, the Gateway Arch, and the riverfront.

The Gateway Arch is 630 feet tall, giving in a height equivalent to a 63-story building. Between its outer legs, it measures 630 feet at ground level. The legs at the base of the structure are 54 feet wide, while the top of the structure is only 17 feet wide. The entire structure is composed of 142 sections of stainless steel sections, altogether weighing in at 43,226 tons. It sits on top of foundations that have been dug 60 feet below ground. At the top of the arch there is an observation deck complete with 16 small windows measuring 7 inches by 27 inches. While these seem rather small for a structure this grand in size, visitors are often surprised to learn that it took 500 tons of pressure to pry the north and south legs of the structure in order to position the last four foot piece at the top. This made it impossible to insert windows any larger in size.

While the monument has built-in stairs and elevators for maintenance purposes, visitors travel to the top of the arch via tram cars, which elevate at a speed of 340 feet per minute.

Once at the top, visitors should be able to see 30 miles in each direction provided that the weather is clear. The view westward showcases Missouri including views of downtown St. Louis. Gazing eastward, visitors will see the Illinois side of the river. While the arch straddles the Mississippi River, 15 miles north of the arch the Missouri River meets the Mississippi River.

The unique shape of the arch is more precisely called a catenary curve. This is the shape ascribed to free-hanging chains when they are held at both ends. Visitors who have a fear of heights are advised that the structure was built to withstand earthquakes and can sway up to 18 inches in both directions. Many are relieved to find that the arch is in fact stable under normal conditions and that it would take winds of 50 miles per hour to move it just 1.5 inches.

The landscape for the grounds surrounding the Gateway Arch was designed by architect Eero Saarinen and landscape architect Dan Kiley. In so doing, their goal was to echo the elegant lines of the arch by including elements that speak to its curvature without overshadowing it with intricacy. They accomplished this task by including winding walking paths, ponds, and carefully chosen greenery. Visitors are encouraged to walk the grounds and reflect on the ways in which the design of the arch is mirrored in its surroundings.