Things to Do in Mississippi: Tupelo Automobile Museum 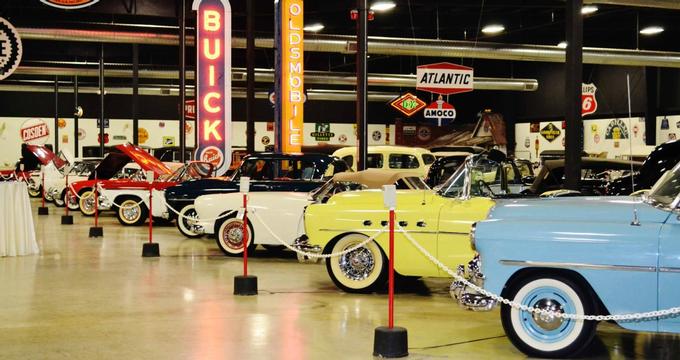 Located in Tupelo, MS, the Tupelo Automobile Museum displays more than 100 antique and celebrity cars dating back to 1886, formed from the personal collection of local car collector Frank Spain. Frank Spain, a Tupelo-area electrical engineer and entrepreneur, began his work in the radio and television industries as a teenager, when he helped to start an AM radio station, WELO, at his high school. Following graduation from Mississippi State University at the age of 19, he worked as an engineer for the National Broadcasting Corporation in Washington, D.C. and aided with the construction of the city’s WNBW television network and assisted with the broadcasts of major White House and Capitol events, including the presidential inauguration of 1949.

Upon returning to the Tupelo area, Spain started the city’s first television station in 1957 with hand-built antennas, transmitters, and camera equipment. He formed the Microwave Service Company two years later to provide signals to CATV systems in 12 states, and with the help of Jack Goeken and Bill McGowan, formed telecommunications corporation MCI, now a subsidiary of Verizon. Until his death in 2006, Spain owned and operated the NBC-affiliated WTVA and WMDN television networks in Tupelo and nearby Meridian, Mississippi.

In 1974, Spain purchased his first antique car, which spurred a love of antique car collection and restoration. With the help of close friend Max Berryhill, Spain acquired more than 150 rare automobiles from throughout North America and Europe, including a number of celebrity-owned vehicles. Until the late 1990s, the collection was stored at various locations throughout the United States, but through the assistance of the Tupelo Convention and Visitor’s Bureau, Spain and Berryhill were able to secure a permanent location to display the collection as a public museum. In 2002, the Tupelo Automobile Museum was opened to the public, and the following year, it was declared the official state automobile museum of Mississippi.

Today, the Tupelo Automobile Museum displays a collection of more than 100 cars, including notable holdings of rare antique and celebrity cars. The 12,000-square-foot gallery is located in downtown Tupelo at 1 Otis Boulevard, across from the city’s BancorpSouth Arena, and is operated as part of a nonprofit educational organization. Open-viewing restoration bays throughout the museum showcase the progress of restorations of additional vehicles, which are continually added to the museum’s collections.

The museum’s collections are valued at over $6 million, presented as a showcase of the progress of the American automobile industry over the late 19th and 20th centuries. All museum holdings are displayed chronologically, beginning with an 1886 Benz designed by German engineer Karl Benz, credited as the creator of the first petrol-powered three-wheeled cart. Other notable early prototypes include an 1899 Knox and a 1908 Glyde, which was praised by Automobile Review for its industry innovations in assembly and powerplant mounting. Early automobile industry forerunners such as the 1929 Duesenberg J are showcased, along with luxury vehicles such as the 1928 Hispano Suiza and unique models such as the 1916 Owen Magnetic, which utilized a crank starting system and an engine switching system with a generator feeding output to a rear electric motor.

A large array of cars from the mid-20th century are presented, including a rare 1948 Tucker sedan, hailed as the “car of the future” at its introduction, a 1963 Special Leslie, modeled after entrants into a 1908 New York Times-sponsored intercontinental race and used in the feature film The Great Race, and a 1964 Ford Mustang, first showcased at that year’s New York World’s Fair. The ubiquitous Chevrolet Corvette is also represented by a 1957 model. Later holdings include a never-driven 1994 Dodge Viper and a 1982 Barrister Corvette once owned by pianist and popular musician Liberace.

Several vehicles connected to local rock music legend Elvis Presley are showcased, including a 1976 Lincoln Mark IV purchased as a gift by the musician for Denver police captain Jerry Kennedy, who served as a chief security officer for a concert Presley held in the city. The original check to the dealership, signed by Presley for a sum of $13,386.69, is displayed alongside the vehicle, along with photographs of the gift presentation. A 1939 Plymouth is also displayed as a donation by the nearby Elvis Presley Birthplace site, the same model which was driven by Presley’s father Vernon when his family moved from Tupelo to Memphis.

Visitors may explore the museum at their leisure on self-guided tours seven days a week, with facilities open every day except for Christmas, Thanksgiving, Easter, and New Year’s Day. Private tours are available for groups and organizations, including school tours for elementary and secondary students tailored to Mississippi curriculum standards. Rotating museum exhibits focus on special automobile industry topics such as farming equipment and automobile racing. An annual Christmas lights display is also presented at the museum during the winter holiday months.

More Mississippi things to do

Things to Do in Oxford, Mississippi: Rowan Oak

Things to Do in Natchez, Mississippi: Stanton Hall