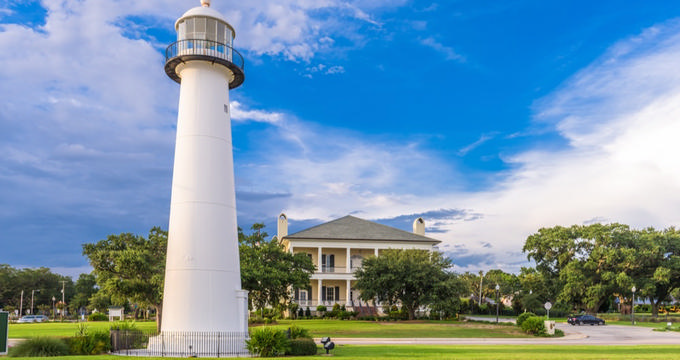 The United States can boast of an exceptionally long coastline with many beautiful towns and cities dotted along the way. From the East Coast to the West Coast, there are countless great beaches and coastal areas to explore all around the United States, and Biloxi stands out as one of the very best. Located in Harrison County and home to around 45,000 people, Biloxi is a very popular summer resort location, and its historic lighthouse is easily its most famous landmark.

The History of The Biloxi Lighthouse

The Biloxi Lighthouse is one of the most famous lighthouses in all of North America and is often the first thing people think of when speaking about Biloxi. Plans for the construction of the lighthouse were first laid out in 1847, with the United States Congress setting aside $12,000 the construction of the Biloxi Lighthouse, which was built and placed into operation just one year later.

In 1860, not too long after it had been built, the lighthouse was threatened by a hurricane along the Mississippi Gulf Coast. Various other lighthouses were destroyed in the storm, but the Biloxi Lighthouse remained standing and still stands to this day, despite having had to deal with the winds and waves of many other storms and hurricanes over the decades.

The Biloxi Lighthouse earned a place on the National Register of Historic Places in 1973 and was classed as a Mississippi Landmark in 1987. In the modern era, it is owned and operated by the City of Biloxi. It still serves its duty as a navigational aid and has taken some damage from hurricanes and erosion over the years, but has always stayed standing and undergone various renovation and restoration treatment.

- Times - The guided tours of the Biloxi Lighthouse leave bright and early in the mornings. The first tour leaves at 9am, with the next tours setting off at 9.15am and 9.30am, so guests wishing to walk around the Biloxi Lighthouse and learn all about its past will need to arrive early. All tours are subject to the weather, so may be canceled in stormy conditions.

- Prices - Anyone wishing to take guided tours of the Biloxi Lighthouse will need to pay for entry, but the prices are very low and reasonable. All children aged between 2 and 12 will need to pay just $2, while adults are charged $5 each. Discounts are available for those traveling as part of a larger group.

- Location - The Biloxi Lighthouse is located at 1050 Beach Blvd, Biloxi, MS 39530. The lighthouse is easy to spot from afar and is conveniently located near the Biloxi Visitors Center, not far from the Beau Rivage Resort and Casino.