Things to Do in Michigan: The Felt Estate 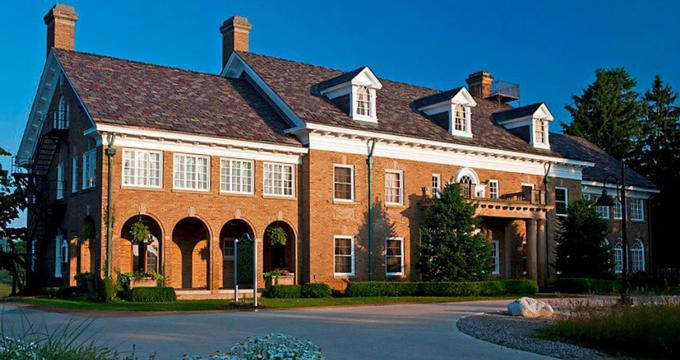 The Felt Estate near Saugatuck, Michigan is the historic home and gardens of Dorr Eugene Felt (1862-1930), a Chicago machinist who invented the Comptometer in 1886, becoming a millionaire by greatly improving the efficiency of business accounting. The 1928 Georgian mansion is currently in process of restoration. The goal of the project is to return the mansion to its luxurious 1929 state, while it was still occupied by Dorr Felt himself.

The brick Georgian home with a rectangular plan is three stories high with a gabled roof of slate tiles. The home’s main body is 6 bays wide, flanked on each side by recessed 4-bay wings. A limestone portico covers the front entryway. The interior of the home features intricately carved woodwork, wall paneling and staircases. Six of the mansions bedrooms may be toured, or rented out for an overnight stay. The master suite includes a sitting room, full bathroom and dressing room. Four additional rooms are named for Dorr’s daughters. The Constance room features two Jenny Lind twin beds, the last remaining original furniture belonging to the Dorr family.

A carriage house on the property was originally built in 1919 for Felt’s many automobiles, while the second floor was used as housing for the home’s caretakers and staff. A chapel on site was brought to the property from two miles away in Gibson, Michigan where it was originally built over 100 years ago. The vernacular style country church features original wood floors and windows. Not original to the Felt family estate, the chapel is now used for weddings that take place on the estate property.

History: Dorr purchased hundreds of acres of land along the western Michigan shoreline in 1919 and named it Shore Acres Farm. The Big House, as Dorr referred to it, was built in 1925 as a summer home for Dorr’s wife, Agnes, as well as his four married daughters and their families. The mansion, which occupies over 12,000 square feet, was completed in 1928 with 25 rooms, including a ballroom on the third floor. Agnes unfortunately passed 6 weeks after the family moved in, and Dorr 18 months later. The family kept the home until the end of World War II in 1949. That year Dorr’s children sold not only the family business, but the home and many of its contents. The home and grounds were purchased by The St. Augustine Seminary, a Catholic school for boys. The home was at first used as housing for the boys. In 1960, when the school constructed additional buildings on the property, the mansion became home for a group of cloistered nuns. By the late 1970’s the property had been sold to the State of Michigan and was used as a prison. During this time, State Police used a portion of the mansion as office space. In the 1990’s the property again changed hands, this time for the sum of only $1 to the Laketown Township. The contract stipulated that the mansion was to be used for public use, and not sold or leased for private business. The home was added to the National Register of Historic Places in 1996. Today, in addition to donations, the estate raises funds for the restoration of the property by renting the site for events, weddings and parties as well as hosting tours.

Ongoing Programs and Education: The mansion offers self-guided and guided tours for groups and individuals. Self-guided tours are offered through the summer, and by appointment only during the winter months. Guided tours last 90 minutes and include a full history of the estate. Guided tour participants may view the documentary, “The Man and His Mansion” at no additional charge. Each guided tour includes lunch, which is served on the balcony overlooking the park when weather permits.

Winterfest is an annual celebration that takes place for one week each December. The 2017 theme is Go Wild! at the Felt, in remembrance of Mr. Felt’s zoo that was on the property in the 1920’s. Animals kept at the estate included bears, deer, beavers, otters, owls, geese and peacocks. Winterfest includes special holiday themed tours of the mansion, live music performances, and wine and dine events.

Each summer, the estate hosts a free Summer Concert Series on Thursday evenings through June and July. Different food and wine vendors attend each week. The lineup for 2018 spans the genres of reggae, rock, bluegrass, jazz and blues.

More Things to Do in Holland, Michigan, Michigan Places to Visit

Kalamazoo, MI Things to Do: Kalamazoo Institute of Arts