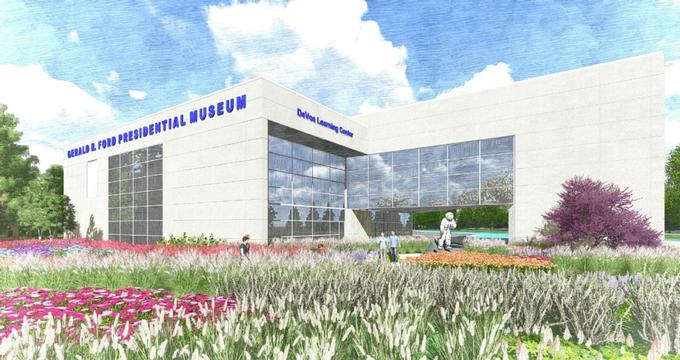 The Gerald R. Ford Presidential Museum in Grand Rapids, MI opened in 1981 and is part of the National Archives and Records Administration's presidential libraries system. The heart of the museum is a permanent exhibit that explores the highlights of the lives of President Ford and his family. There are also changing temporary exhibits that contain artifacts from other museums throughout the United States. In addition, the museum offers an assortment of family-friendly lectures and events on a regular basis, which aren’t associated with the exhibits.

The Ford Museum displays, preserves, and collects a variety of historical artifacts that tell the story of the life and times of President Gerald R. Ford. Currently, the museum possesses about 19,000 historical items, including items related to Ford's presidential campaign in 1976, the Whip Inflation Now (WIN) campaign, and the Ford family. Other items in the collection were gifts, including American bicentennial and head of state gifts Gerald Ford received while he was president.

One part of the permanent exhibit focuses on the life and career of Gerald R. Ford and the objects in this exhibit illustrate a lifetime committed to public service, from a boy scout to President of the United States. They reflect the personality, accomplishments, challenges, and struggles that made Ford so endearing to many people. From his days in school through college, to Ford's U.S. Navy service, to 25 years as a U.S. Representative, to being selected as vice president, to being President of the United States, and finally to his retirement, almost all of Gerald R. Ford's life is showcased in the exhibit through a broad variety of historical items.

Another aspect of the permanent exhibit at the Gerald R. Ford Presidential Museum are the Presidential Footballs. Ford is ranked as one of the most athletic U.S. presidents, and athletics played a large role in his life. He excelled in basketball, tennis, swimming, golf, baseball, downhill skiing, and football. Ford abilities in football led to him receive city and state honors during high school, MVP status in college, and being coveted by NFL teams. Although he pursued a career in law and public service, he still loved football and his fondness for the sport led him to take on coaching opportunities in law school and while serving in the U.S. Navy. Every Presidential Museum includes at least one artifact collection unique to that president's experiences. The Ford Museum preserves an interesting collection of footballs, some representative of Ford's days as a player and others of his period as a coach.

Head of State Gifts are significant to the administration of any president, and the Head of State Gifts Given to the President area of the Ford Museum's permanent collection displays the gifts given to President Ford. A formal exchange of gifts is often dictated when leaders of different countries meet for diplomatic relations. While also accompanied by other diplomatic measures, different types of gifts help preserve peace, express admiration, bridge disparate cultures, and cool tempers. These gifts are often created from precious metals by extremely skilled artisans.

Back to: Things to Do in Grand Rapids, MI

Things to Do in Ann Arbor, MI: University of Michigan Museum of Art

Things to Do in Grand Rapids, Michigan: Meyer May House