15 Best Things to Do in Marquette, MI 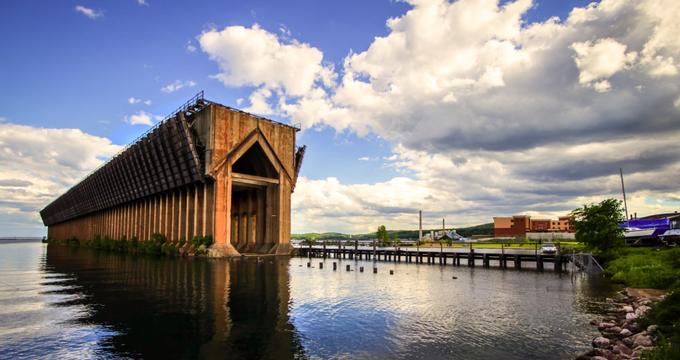 Marquette, Michigan is located along Lake Superior on the northern peninsula of the state. The area became a bustling metropolis of hard workers of the iron ore industry. The forested landscape and sparkling clear waters of the rivers and lakes make Marquette a dream destination for nature lovers as well as history aficionados. From the glorious waterfalls of the Dead River to the family traditions of local restaurants, and the passion for the arts and education, Marquette welcomes everyone home. 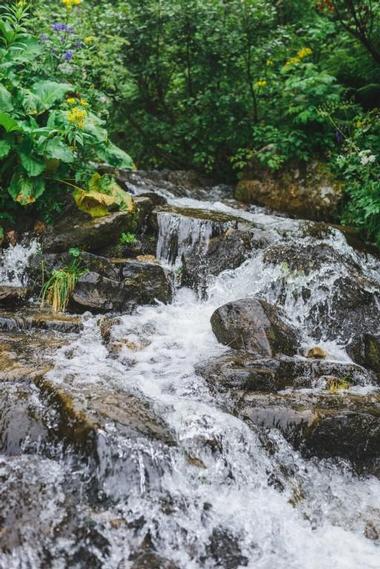 Dead River Falls is a half-mile stretch of the Dead River located just outside Marquette with an astonishing succession of waterfalls. This arduous trail takes hikers upstream where they’ll find the first major fall spilling over the edge and dropping straight down into a sparkling pool. The hike continues along the river revealing the next major fall that slides over the rock face as it plunges over 15 feet down. Here visitors can climb down the rocky ledges to the base of the waterfall. The final major fall splashes down three ledges into a tranquil pool of calming waters and marks the turnaround point of the hike.

The Upper Peninsula Children’s Museum is a hands-on educational museum designed to engage families in programs about the arts, science, health, and global issues like the environment. Founders of the museum set-out on a mission to create equal opportunity learning for anyone in the community to take part in with interactive programs and exhibits to get the community involved in the arts and science around them. During initial planning, children helped design the facility with the Design-O-Saurus program. From there, the museum added The World of Science and Nature and two more exhibit halls and now features eight major exhibits.

The Marquette Maritime Museum is part of an active lighthouse with guided tours of the museum that is housed in the old city waterworks building as well as tours of Marquette Harbor Lighthouse. Nearly 12,000 visitors a year pay tribute to the area’s maritime history and honor the submarine veterans who’ve kept the waters safe. The museum features displays that teach guests about the functions of the lighthouse and tell the tragic tales of two infamous shipwrecks in the waters of Lake Superior, the Edmund Fitzgerald in 1975 and the Henry B. Smith in 1913. Storms and rough waters in the icy month of November took down each of these massive vessels, crew and all.

The Superior Dome was built by the state of Michigan beginning in 1991 with Phase II additions completed in 1995. Located on Northern Michigan University’s campus in Marquette, it is home to the Wildcat’s football team as well as a multitude of other sports including basketball and volleyball on the synthetic surface hidden below the retractable turf of the field. In addition to sporting events, the world’s largest wooden dome hosts a plethora of community events like tradeshows, conventions, and the Special Olympics. On days when the dome is eventless, visitors are free to explore the facility and make use of the space for exercise and fun.


The Iron Ore Heritage Trail is a multipurpose nature trail that follows the old corridors of the railroad used in days of old to haul firewood and iron ore to the Lake Superior Harbor. This 47-mile span of pathway gets year-round use from walkers, horseback riders, snowmobilers, and history enthusiasts. This extensive byway connects and travels through several populated areas of Marquette County, offering downtown amenities to travelers along the way. This historical journey provides education about the iron ore industry and its impact on the area. Community fundraisers and events have helped to restore and repurpose the old buildings along Iron Ore Heritage Trail into viable businesses like restaurants, pubs, and shops.


Marquette Mountain is a winter haven for skiers and snowboarders since first opening the ski area in 1957. During the spring and summer months, the mountain offers several bike trails of varying degrees of difficulty. Marquette Mountain provides skiing lessons for children 3 years old and up as well as private lessons for individuals and groups. The mountain hosts alpine racing competitions for a number of area ski clubs. The average annual snowfall on Marquette Mountian of 120 inches ensures a long season of skiing and snowboarding entertainment. This majestic landscape is a picturesque location for weddings and other outdoor events.

Barrel & Beam is the only farmhouse ale brewery among the over 300 craft beer makers in the area. Their unique range of flavors are made from locally grown ingredients including the wide variety of fruits available like apples, blueberries, and peaches and are used to create seasonal brews and limited edition ales. Originally built in 1934 as a supper club, the building received a complete overhaul in 2016 and was reborn as the Barrel & Beam brewery. The sturdy log construction and the striking contrast of white walls and polished wood beams and bar top create a warm and welcoming atmosphere.

Lake Superior Theatre is a summer-time attraction hosted at the Lake Superior Yacht Yard. The theatre’s mission is to provide the magic of the performing arts and education about professional theatre. Over the last 21 years, this not for profit organization has metamorphosized a functioning boathouse into a playwright’s dream home surrounded by the picturesque lake and forest. Lake Superior Theatre has performed Shakesperian classics like Hamlet as well as timeless musical favorites like Guys and Dolls. Together with the Superior Arts Youth Theatre program, Lake Superior Theatre gives young actors ages 3-18 a full emersion into the wonders of live performing arts.

DeVos Art Museum grew from the Lee Hall Gallery of Northern Michigan University, originally established in 1975 to exhibit works by students and faculty. Over the years, the gallery established permanent exhibits, developed guided tours, and provided show space for a rotation of local and regional artists. In early 2005, The DeVos Art Museum opened the doors of its newly constructed museum space and serves as part of the School of Art and Design at the university. The museum’s purpose is to bring art and ideas to the community in the form of engaging exhibitions of diversity and collaboration.

The Shiras Planetarium first opened its doors in 1965 thanks to funding from the Shiras Foundation and the National Defense Act. Built as an addition to the then newly built high school, the planetarium has served as an educational spectacle to children and adults for generations. The advancements in technology over the years improved the quality and the content of the planetarium’s captivating programs about the night sky. In addition to the star shows, the Shiras Planetarium hosts laser light shows on Saturday nights with music from rock legends and musical geniuses as well as special events and holiday-themed entertainment.

The CR-510 Bridge is a unique treasure of engineering mastery in the form of a truss bridge. This massive steel span of riveted trusses moved from its original home over the Allegheny River in Pennsylvania to its current location crossing the Dead River in 1939. Pennsylvania truss bridges such as this one are a special type of construction built to extend across great distances. As of 2010, the CR-510 Bridge is a historic monument to the fine craftsmanship and engineering marvels created by America’s great bridge builders. The bridge no longer handles every day traffic but is open to pedestrians, explorers, and engineering admirers.

Jean Kay’s Pasties and Subs began as a small bakery created from the love of parents wanting their son to have a successful future. In 1975 an old family recipe was the launching point for the Harsh’s son when they opened as Jean Kay’s Sweet Shop. Now after coming out of retirement, Brian has taken back the reins of his family’s legacy and is baking up the classic pasty using the same old world methods to recreate his grandmother’s delectable savory treat. In addition to the family favorite, Jean Kay’s Pasties and Subs menu serves up flavorful sandwiches, wraps, and subs made with fresh ingredients and the loving care only a family restaurant can possess. 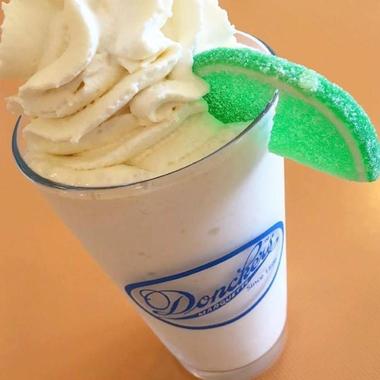 Donckers was established by a man needing to provide for his family after suffering an accident in 1896. It started out as a simple outdoor stand selling, fruit, candies, popcorn, and tobacco. In 1914, Fred Donckers built a solid cornerstone for his business and is still home to today’s Donckers’ fine candies and family restaurant. Fred’s humble shop grew along with the wonderful community of Marquette and was passed down from generation to generation in the Doncker family, keeping the spirit and sweets of Grandpa Fred alive. Today Donckers still follows the tried and true recipes of a loving father’s passion for confections. 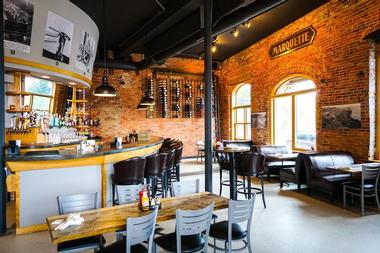 Iron Bay Restaurant and Drinkery is located in the restored Iron Bay Foundry building originally constructed in 1872 and served as the central hub of the mining industry. The restaurant prides itself on providing outstanding quality service to every patron in a warm and inviting family atmosphere. Iron Bay Restaurant and Drinkery serves sophisticated appetizer plates like California Rolls and Salmon Cakes alongside fresh salads, rich wholesome soups, sandwiches like Big Al’s Classic Hammy Sammy made with shaved ham and swiss cheese, seafood delicacies, and juicy burgers. A selection of gourmet desserts by Peace Pie Company will complete the dining experience in style.

Places to eat near me, free points of interest, lakes near me, waterfalls, weekend getaways near me: Romantic Getaways in Massachusetts, Things to Do in Grand Rapids MI, Things to Do in Norman, Washington, PA, St. Joseph, Spring 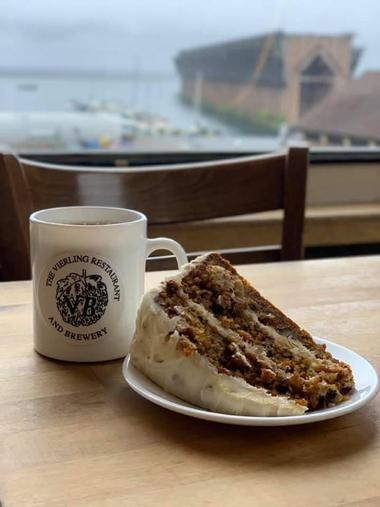 The Vierling Restaurant has a long-standing history with the community of Marquette. Martin Vierling established himself as a retail businessman selling fine liquors to the hard-working men of the mining and iron ore industry. After a couple of failed locations, he moved his establishment one final time to the current spot on the corner of Front and Main. Now, after nine long months of restorations in the mid-1980s, The Vierling Restaurant showcases the original stained glass windows and oil paintings of Martin’s collection while delivering an array of fresh homestyle lunches and dinners. A fully stocked wine cellar guarantees the perfect pairing with every meal.

15 Best Things to Do in Marquette, MI

21 Best Things to Do in Detroit, Michigan

25 Best Things to Do in Holland, Michigan