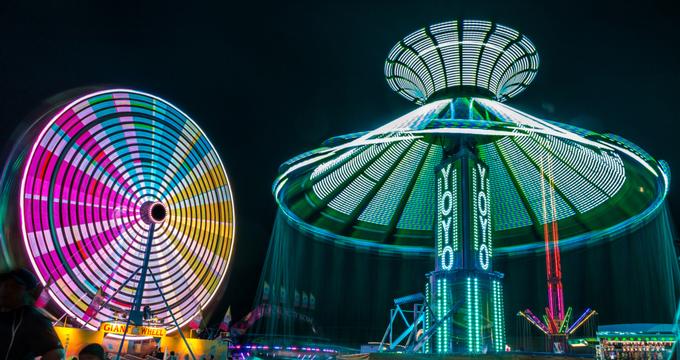 Michigan has a wealth of amazing and memorable things to see and do. Amusement parks are fun no matter where you are, but the ones in Michigan are unique and can’t be found anywhere else. For example, while there you can spend the day learning how to make cheese or participating in a wooden shoe demonstration at Nelis’ Dutch Village; they even have a petting zoo that lets you get up close and personal with goats, sheep, and much more. Older kids will love spending the day at Michigan’s Adventure, where they can ride thrilling roller coasters and waterslides in the largest amusement park in the state. CDC information for travelers. Hours/availability may have changed. 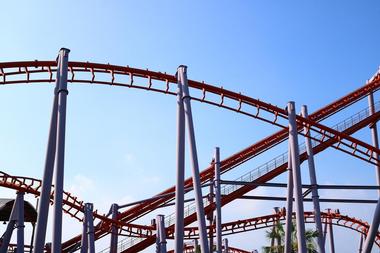 Locally owned and operated, Kokomo’s Family Fun Center is the ultimate entertainment destination in Michigan. The center has a variety of activities in a friendly atmosphere and is enjoyed by kids and adults of all ages. There’s no admission fee to the center and patrons can enjoy the rides and games with the simple Load and Go Player Cards; there are additional individual and family value packs with discounted pricing. Attractions include go-kart racing, miniature golf, lazer tag, and an arcade filled with classic and cutting-edge video games. Those who are looking for something more adventurous can go for a thrilling ride on the Serpent Roller Coaster, which is nearly five stories high. 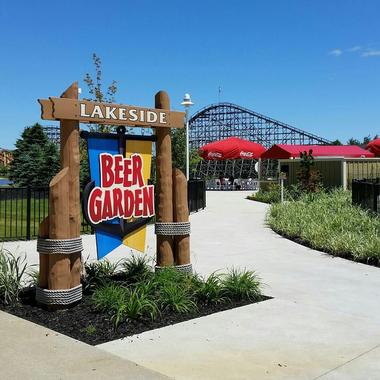 Enjoy over 250 acres of fun and games at the state’s largest amusement and water park, Michigan’s Adventure. Ride on the heart-pounding Thunderhawk roller coaster or get your thrills on Shivering Timbers; younger patrons can enjoy the swan boats and much more. There are attractions and activities suitable for visitors of all ages. Boogie Beach is a family favorite and has large waves you can overcome, ranging from 1 to 7 feet. In addition to the thrilling land and water rides, Michigan’s Adventure also has a farm, which is home to a variety of animals including llamas, alpacas, a mini-horse, and much more. Next read: Michigan beaches

You are reading "Best Michigan Amusement Parks" Back to Top 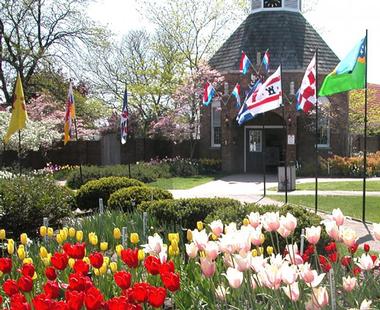 Nelis’ Dutch Village is a fun and unique theme park that celebrates the culture and heritage of the Netherlands. Visitors will be able to see and do many things, including exploring a wooden shoe factory, get hands-on with cheese making, and even visiting animals in the petting zoo. The rides are perfect for younger kids and include the Dutch Chair Swing Ride, a carousel, pedal pumper cars, a windmill ride, and much more. Little ones can take a goat or sheep for a walk, pet a bunny, feed the goats, visit the cows and pigs, or meet the park’s mini-horse, Princess, while at the petting zoo.

You are reading "Best Michigan Amusement Parks" Back to Top

The Marv Herzog Hotel is the perfect place for couples, families, and friends looking to enjoy the Bavarian-style village of Frankenmuth, Michigan, which draws millions of tourists with its festivals throughout the year.

Local golf courses include Fortress Golf Course, which hosts special events, tournaments, clinics, and junior programs during the season, and Timbers Golf Club, which is notable for the manner in which the native grasses, woodlots, and ponds are incorporated into its design.

This thirty-eight-room boutique hotel was designed and decorated in the style of an alpine lodge with memorabilia of the hotel’s namesake – a renowned musician, bandleader, and Frankenmuth native – proudly displayed. Each guest room includes a refrigerator, microwave, and coffee maker, and select rooms include whirlpools and private balconies with views of the Cass River or the village.

Amenities include free Wi-Fi, free underground parking, a riverfront Biergarten, a twenty-four hour gift shop, a free Deluxe Breakfast each morning, which includes eggs, biscuits and gravy, sausage, French toast, and Belgian waffles. There is also lighter fare such as fruit and yogurt, as well as free beer, cocktails, wine, soft drinks, and snacks each evening at the hotel’s daily reception, where guests can mingle with fellow vacationers.

Tiffany’s Food & Spirits serves Italian-style fare with menu options such as char-grilled Canadian Walleye; PastaPitza, which is a pizza topped with a pasta dish such as fettuccine alfredo, tortellini marinara, or chicken marsala; the Roast Beef Sandwich with thinly sliced meat marinated in stock with Italian seasoning and pepperoncini and served on ciabatta; the Rachel Sandwich with turkey, Swiss cheese, and coleslaw topped with thousand island dressing served on marble rye; and Carmel Banana Cheesecake Bites, which is deep fried and topped with chocolate syrup. A kid’s menu is also available.

St. Julian Winery hosts events and classes like Wine and Cheese Pairing, which teaches the best combinations for optimum taste; Wine Blending Parties where you create your own “Meritage,” including naming your blend and creating a label; Wine 101, which teaches attendees the basics of wine, including wine terminology, wine anatomy, varieties of grapes, wine production, and more; and the MOMosa Weekends, which salute the ladies in your life with a selection of sparkling wines and mimosas. The winery’s available stock includes Blue Heron with a crisp acid structure and overlays of pear and mango; A&G Brandy, an aged brandy with notes of vanilla, hazelnut, butterscotch, toast, chocolate, and anise; BR Chancellor Noir, with aromas of chocolate covered espresso beans and sweet cherry vanilla, and a ripe currant, black raspberry, and Bing cherry flavor; and BR LH Vidal Blanc, with tangy caramelized apple and apricot notes and a mineral accent.

Things to do Nearby

The local festivals include Zehnder’s Snowfest, which has snow sculpting and ice carving competitions, a children’s area, fireworks, and a Michigan Apple Recipe contest with dessert, sandwich, and pasta categories, a cookie decorating contest, a warming tent, and live entertainment. The Holiday Celebration Candlewalk kicks off the Christmas season and includes Christmas carols, a visit from Santa, and the lighting of the village’s Christmas tree.

Back to: Best Romantic Weekend Getaways in Michigan, Things to Do in Frankenmuth

Of course no Bavarian-style village would be complete without an Oktoberfest, and Frankenmuth is no exception. The 2016 Oktoberfest starts on the evening of September 15th and runs until ten o’clock on September 18th. It includes German-style food, a large wooden dance floor, souvenirs, and plenty of drinks to choose from.

Other local attractions include Bavarian Belle Riverboat Tours, which include an hour long narrated tour. Tours are available from early May through mid-October, and can accommodate groups and charters of up to one hundred and fifty people. Extended tours are available for charters. The open-air upper deck is canopied, while the lower deck is fully enclosed and has restrooms. Snacks and soft drinks are available during the tour.

The Felt Estate near Saugatuck, Michigan is the historic home and gardens of Dorr Eugene Felt (1862-1930), a Chicago machinist who invented the Comptometer in 1886, becoming a millionaire by greatly improving the efficiency of business accounting. The 1928 Georgian mansion is currently in process of restoration. The goal of the project is to return the mansion to its luxurious 1929 state, while it was still occupied by Dorr Felt himself.

The brick Georgian home with a rectangular plan is three stories high with a gabled roof of slate tiles. The home’s main body is 6 bays wide, flanked on each side by recessed 4-bay wings. A limestone portico covers the front entryway. The interior of the home features intricately carved woodwork, wall paneling and staircases. Six of the mansions bedrooms may be toured, or rented out for an overnight stay. The master suite includes a sitting room, full bathroom and dressing room. Four additional rooms are named for Dorr’s daughters. The Constance room features two Jenny Lind twin beds, the last remaining original furniture belonging to the Dorr family.

A carriage house on the property was originally built in 1919 for Felt’s many automobiles, while the second floor was used as housing for the home’s caretakers and staff. A chapel on site was brought to the property from two miles away in Gibson, Michigan where it was originally built over 100 years ago. The vernacular style country church features original wood floors and windows. Not original to the Felt family estate, the chapel is now used for weddings that take place on the estate property.

History: Dorr purchased hundreds of acres of land along the western Michigan shoreline in 1919 and named it Shore Acres Farm. The Big House, as Dorr referred to it, was built in 1925 as a summer home for Dorr’s wife, Agnes, as well as his four married daughters and their families. The mansion, which occupies over 12,000 square feet, was completed in 1928 with 25 rooms, including a ballroom on the third floor. Agnes unfortunately passed 6 weeks after the family moved in, and Dorr 18 months later. The family kept the home until the end of World War II in 1949. That year Dorr’s children sold not only the family business, but the home and many of its contents. The home and grounds were purchased by The St. Augustine Seminary, a Catholic school for boys. The home was at first used as housing for the boys. In 1960, when the school constructed additional buildings on the property, the mansion became home for a group of cloistered nuns. By the late 1970’s the property had been sold to the State of Michigan and was used as a prison. During this time, State Police used a portion of the mansion as office space. In the 1990’s the property again changed hands, this time for the sum of only $1 to the Laketown Township. The contract stipulated that the mansion was to be used for public use, and not sold or leased for private business. The home was added to the National Register of Historic Places in 1996. Today, in addition to donations, the estate raises funds for the restoration of the property by renting the site for events, weddings and parties as well as hosting tours.

Ongoing Programs and Education: The mansion offers self-guided and guided tours for groups and individuals. Self-guided tours are offered through the summer, and by appointment only during the winter months. Guided tours last 90 minutes and include a full history of the estate. Guided tour participants may view the documentary, “The Man and His Mansion” at no additional charge. Each guided tour includes lunch, which is served on the balcony overlooking the park when weather permits.

Winterfest is an annual celebration that takes place for one week each December. The 2017 theme is Go Wild! at the Felt, in remembrance of Mr. Felt’s zoo that was on the property in the 1920’s. Animals kept at the estate included bears, deer, beavers, otters, owls, geese and peacocks. Winterfest includes special holiday themed tours of the mansion, live music performances, and wine and dine events.

Each summer, the estate hosts a free Summer Concert Series on Thursday evenings through June and July. Different food and wine vendors attend each week. The lineup for 2018 spans the genres of reggae, rock, bluegrass, jazz and blues.

More Things to Do in Holland, Michigan, Michigan Places to Visit

12 Best Things to Do in Midland, MI

21 Best Things to Do in Holland, Michigan

25 Best Things to Do in Ann Arbor, Michigan

21 Best Things to Do in Lansing, Michigan