Things to Do in Massachusetts: Lizzie Borden House 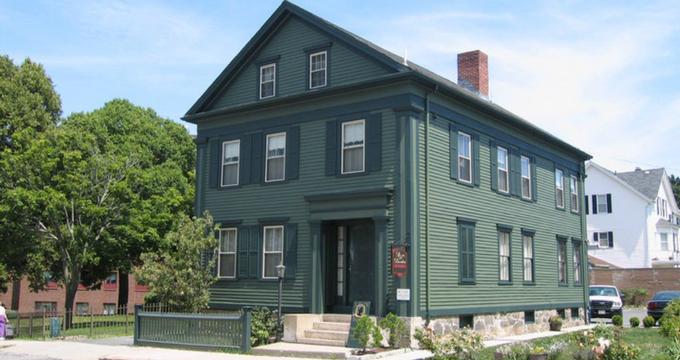 Located in Fall River, Massachusetts, the infamous Lizzie Borden House preserves a gruesome chapter in American history. Part museum and part bed and breakfast, this attraction offers visitors a once in a lifetime opportunity to lodge in a place many believe to be haunted by the spirits of the people who once resided there and whose lives came to a tragic end at the hands of a brutal murderer.

Lizzie Borden was born in 1860 to Andrew Jackson Borden and Sarah Anthony Borden. After many years of financial struggles, her father finally saw success in banking, property development, and textile manufacturing. Despite his wealth and fortunes, Andrew was extremely frugal, even going as far as to forgo the installation of indoor plumbing in the family home. The Bordens were known for their religiosity and thus opted to encourage their children to get involved in church activities. Lizzie taught Sunday school and was involved with the Women’s Christian Temperance Union as well as the Christian Endeavor Society. The death of Sarah Borden in 1863 was a turning point for the family. Andrew married Abby Durfee Gray three years after the passing of his first wife. It was widely believed that both Lizzie and her sister Emma Lenora Borden had a strained relationship with their stepmother. It was hypothesized that it was familial tension that ultimately drove Lizzie Borden to murder her father and stepmother on August 4th 1982. However, after a lengthy trial, Lizzie was acquitted of all charges and the murders remain unsolved to this day. After the trial, Lizzie and her sister continued living in Fall River, albeit on another property.

This Victorian bedroom is arguably the focal point of the entire house. This room, which has a full-sized bad, can be combined with the adjoining suite, Emma’s room, to sleep four people. Many visitors will be surprised to learn that Lizzie continued living in her family home for a period of time following her acquittal for the murders of Andrew and Abby Borden prior to moving to a different home with her sister. The new abode, which the sisters named “Maplecroft,” was located in a more fashionable district of the city.

As the older sister, Emma felt responsible for Lizzie and the two were very close. At the tender age of 12, Emma made a promise to her dying mother to always look out for and take care of her sister Lizzie. Despite the media attention, Emma always maintained that her sister did not commit the crimes of which she was accused. Visitors staying in this spacious room can contemplate the pressure that Emma would have faced, as well as perhaps some of the doubts that likely plagued her as she made her way through a tumultuous period following the murder of her father and stepmother.

Staying in the John V. Morse Room is not for the faint of heart. It was in this room that the body of Abby D. Borden was found on August 4th 1892. While it is true that many old homes have witnessed the passing of different family members, the violence with which Abby was murdered makes this room a particularly eerie space within the Borden home. This eeriness is further magnified by its meticulously decorated interior. Visitors can see a beautifully carved Eastlake bed and dresser, which transport visitors right into the late 19th century.

John Morse was the younger brother of Sarah Morse (Borden), Lizzie’s biological mother. The day prior to the murders, John arrived at the Borden household. His visit was unannounced and he was asked to stay in the guest bedroom by the lady of the house, Abby Borden.

The master bedroom, also referred to as the Andrew Borden Room, contains an en suite bathroom as well as beautiful Victorian era furnishings such as a queen-sized bed. Mr. Borden shared this room with both his first and second wives. While the decadence with which he chose to decorate his quarters may seem impressive, in truth Andrew Borden lived way below his means. Born to a working-class family, Borden was a self-made man, and his humble beginnings always informed the choices he made for his family. Opting for oil lamps instead of gas, he chose not to use electricity or have running water in his home. Some have hypothesized that Borden’s frugality may have contributed to familial tensions with his daughters.

More Massachusetts things to do

Things to Do in MA: The Old Sturbridge Village