Things to Do in Boston, MA: The Freedom Trail Foundation 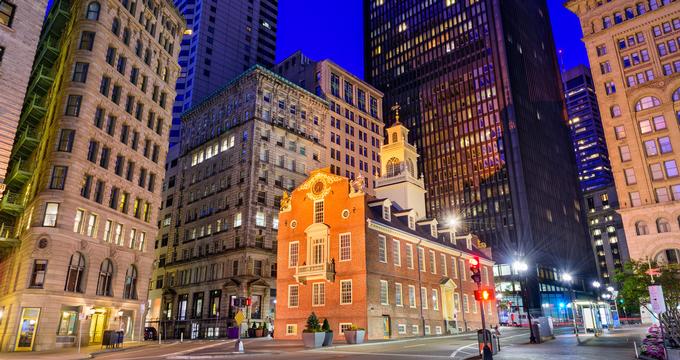 The Freedom Trail is a 2.5-mile route, designated by a red line, that takes visitors through 16 historical sites in Boston that are related to the history of the American Revolution. Some of the trail’s official sites include the Boston Common, the Massachusetts State House and the Old State House, the Old South Meeting House, the site of the Boston Massacre, the Paul Revere House, the Bunker Hill Monument, and the USS Constitution.

Tours can be self-guided or visitors can book a tour with an official guide, a costumed 18th-century Freedom Trail Player, who will both entertain and educate. All tours last approximately 90 minutes and may be purchased online, at the starting location of the tour, which is at the Boston Common Visitor Information Center, or the ArtsBoston Booth at Faneuil Hall.

There are several different tours to choose from. Among them, the Walk into History Tour is the most popular and focuses on the history of the American Revolution, which took place at 11 of the 16 sites on the trail. The Pirates and Patriots Tour focuses on stories of the revolution centered around Boston’s harbor. In the 18th century, Boston was America’s largest port city and this tour offers an entertaining look at both the legal and illegal trade of the time and their role in America’s struggle for independence.

Boston is the home of the American Revolution and one of the oldest cities in the United States. As such, there are many historical sites, monuments, and landmarks of interest to visitors. Although these sites have been preserved, they are spread thin between today’s modern skyscrapers and the bustling city and may easily be passed over. In 1951, Bill Shofield and Bob Winn proposed the idea of the Freedom Trail as a way to offer a concise course of travel to visitors and those interested in visiting Boston’s most historical sites. The two devised a trail, originally just 1.5 miles in length, which would walk visitors past the most significant of Boston’s historical sites. The trail was immediately popular, with over 40,000 visitors in just the 2nd year of operation. Today’s trail is marked with both signage and a painted red line on the sidewalks, guiding visitors through Boston’s hidden gems. A non-profit organization, the Freedom Trail Foundation, was formed in 1964 to help promote and preserve the trail. Today, the foundation manages tourist services, marketing, and programming for over 4 million visitors per year.

In addition to the guided public tours, the Freedom Trail Foundation offers several educational programs. Private and group tours may be customized to meet the particular needs and interests of the group. The wintertime Holiday Stroll explores Boston’s holiday traditions, beginning in the early 19th century. The African-American Patriots tour views the history of the revolution through the eyes of 18th-century African-American revolutionaries. The Revolutionary Women Tour honors Women’s History Month by telling the story of the women of the revolution and their own struggles for equality and freedom. Other special programs of the foundation include History for Hire, which allows groups to hire Freedom Trail Players for their private events and meetings, as well as the Freedom Trail Scholars Program, which offers curriculum supplements to teachers in third and fifth grade classrooms.

When planning a trip to the Freedom Trail, one may consider visiting the rich historical sites just a few steps away. Beyond the 16 official sites on the trail, there are many other historical sites close by and worthy of a visit. The Liberty Tree, where hanging effigies of tax collectors in 1765 were considered to have helped spark the revolution, is marked by a plaque just steps from the trail. The Black Heritage Trail begins at the Massachusetts State House and intersects the Freedom Trail; this trail tells the story of African-Americans who were first brought to Boston as slaves, and of how the American Revolution was a turning point in their lives. The USS Constitution, one of the 16 stops on the Freedom Trail, is located in the Charlestown Navy Yard and is worth a visit, as it is home to many other historical sites, including the Commandant’s House, an 1805 Navy Georgian-style home. For a full listing of sites near the Freedom Trail, visit the Freedom Trail Foundation website.

More Things to Do in Boston

Things to Do in Massachusetts: Provincetown Art Association and Museum

Things to Do in Massachusetts: Heritage Museums and Gardens

Things to Do in Massachusetts: Highfield Hall and Gardens