7 Best Things to Do in Essex, MA

Essex is a lovely coastal town in Essex County, located less than half an hour north of Boston. The city is known as a former center for shipbuilding in the United States and is home to the Essex Historical Society and Shipbuilding Museum, which preserves historic schooners and ship hulls. More than five dozen antique stores are showcased through the city's quaint downtown village, earning it a reputation as one of New England's top antiquing towns. Some of New England's top seafood restaurants are also located within the town, including the historic Village Restaurant, which is known for its award-winning golden fried clams.

Cogswell Grant is a working farm and living history home museum in Essex that was originally constructed in 1728 and restored in 1937 by prominent American decorative arts collectors Bertram K. and Nina Fletcher Little. The 165-acre property was bequeathed to Historic New England in 1984 and was adapted for use as a visitor center and living history facility. Today, the colonial-era farmstead showcases the Littles' celebrated American folk art collections, which were assembled carefully over the course of more than six decades. The beautiful residence features folk art portraits, furniture, textiles, and collectibles still arranged according to the family's design schemes. Guided tours of the facility are offered June through October on Wednesday through Sunday afternoons.

The Essex Historical Society and Shipbuilding Museum is a cultural maritime museum that showcases historical displays related to Essex's history of wooden shipbuilding. Between the 17th and 20th centuries, the city was known as America's top producer of wooden fishing schooners. Today, the museum displays ship models, half hulls, and other maritime artifacts throughout its lovely facility, including exhibits and artifacts on loan from the Smithsonian Institution. Photography, shipbuilding tools, and shipyard dioramas are showcased in exhibits, along with preserved ships such as the Evelina M. Goulart, which was constructed in 1927. Visitors can also explore an adjacent boatyard, which still constructs ships according to historic area traditions.

Crane Wildlife Refuge is a lovely wildlife refuge located on the former estate of 20th-century Chicago industrialist Richard T. Crane, Jr. The refuge is located across seven island habitats and a portion of the Castle Neck area and is surrounded by the Great Marsh, New England's largest contiguous salt marsh. Visitors can explore areas such as the 135-acre Choate Island, which is home to spruce forests, grasslands, savannahs, and native animals such as deer, coyotes, and otters. 3.5 miles of nature trails are showcased throughout the refuge, offering moderately easy hiking experiences. Outdoor activities permitted in the refuge include dock and boat launch facilities for kayaks, canoes, and motorized craft.

Cape Ann Golf Club is Cape Ann's only public golf course, owned and operated by the Stavros family and overseen as part of a private land protection agreement with the Trustees of Reservations. The club is located on a gorgeous salt marsh site along the picturesque Essex Coastal Scenic Byway and has been in operation since 1931. Its course takes advantage of the region's natural coastal beauty, showcasing nine holes set on water overlooking the Essex River. Notable golfers at the course throughout the years include renowned author John Updike, who considered the course a favorite golfing spot and mentioned the course in several stories. After hitting the links, golfers can enjoy delicious pub-style fare at the club's Fairway Pub and restaurant, which showcases dishes from executive chef Norrie Stavros. 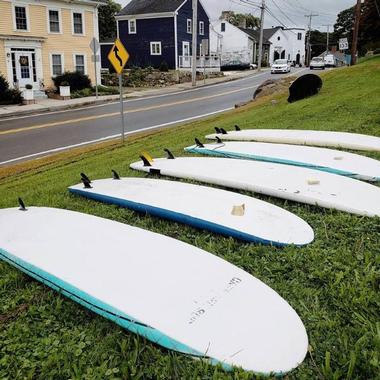 
Cape Ann Stand Up Paddleboards was opened in Essex in 2010 within a former antique barn facility in the city's downtown district. The 2,500-square-foot shop showcases paddleboards and equipment that have been carefully hand-selected for the highest possible quality, including bathing apparel and temperature-controlled water bottles. International and local paddleboard brands sold at the facility include boards from Prana, Boga, One Ocean Love, and Bounce SUP, while apparel options include selections from IMSY Swimwear and Xcel Wetsuits. Paddleboard lessons and tours are also offered by the shop, lasting one to two hours and led by experienced instructors and guides.


Village Restaurant was opened in Essex in 1956 and is known as one of New England's finest seafood restaurants, acclaimed by international publications such as Saveur, Gourmet Magazine, and The Boston Globe. The comfortable, laid-back restaurant is known for its wood-paneled decor and traditional New England contemporary cuisine selections, including signature Essex clams that are fried to golden perfection. Excellent seafood selections include lobster pies, orange ginger shrimp, and fishermen's platters filled with options such as haddock and scallops. Traditional dishes such as crab Mornay and haddock Elizabeth are also served up, along with a full menu of steamer selections, fine steaks, and artisanal sandwiches.

CK Pearl is a family-owned restaurant in Essex overseen by executive chef Patrick Shea, showcasing modern twists on classic New England fare in a lovely space overlooking the Essex River. The charming restaurant is known for its award-winning clam chowder and other high-quality seafood selections, along with delicious barbecue plates and traditional New England favorite recipes. Diners can enjoy creative fish taco selections or choose from excellent entrees such as tuna poké, rhubarb gazpacho mahi mahi, or classic beer-battered fish and chips platters. A full raw bar is also offered, along with shareable plates like coconut shrimp and bluefish pate. Inventive cocktails, fine wines, and local craft brews are served up from the restaurant's full-service bar.

7 Best Things to Do in Essex, MA