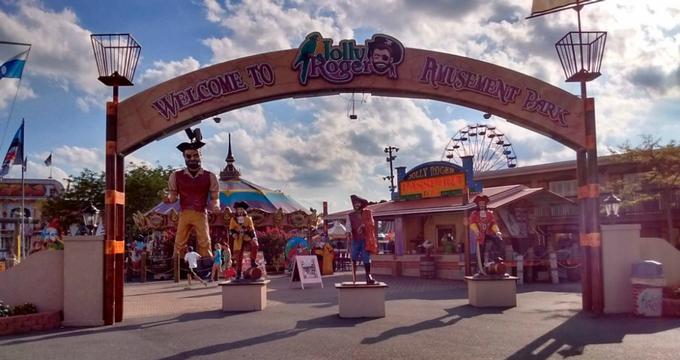 Attractions are available for a variety of ages, heights, and level of thrill. Thrill rides include the Heart Flip and the Wild Cat rollercoaster. Classic rides include a giant Ferris wheel, bumper cars, high-flying swings, a carousel and a teacup ride. The Spyder is one of the park’s most beloved classic family rides, with its fast paced twists and high-flying turns. For younger attendees, the park offers the Iron Horse Express, an antique train from 1952, a fun slide, and a youth adventure area, which includes a low-to-the-ground zip line and ropes course. Two miniature golf courses include Treasure Golf, with a pirate theme, and Jungle Golf, with a rainforest theme.

Splash Mountain Water Park is also located at the Jolly Roger Amusement Park 30th Street location. Attractions include the Aqualoop, voted by Popular Mechanics as the number one water slide in America. The enclosed, transparent water slide includes a 480-foot feet first drop through a trap door to begin the ride, which ends with a 360-degree loop. Additional rides include Stealth, a half-pipe ride with a 45-foot vertical ramp, and a 6-lane speed slide designed for racing. Inner tube rides include Eye of the Hurricane, which spirals in the same manner as the force of nature, and Master Blaster, a high-speed slide built for two riders on double inner tubes. A Rainforest Play Area and Lost Lagoon Family Pool are perfect for young children and families, while the Lazy River offers a slow moving ride for all ages.

Speedworld is themed around car racing and offers over ten different Go Kart rides, as well as Ocean City’s only zip line rides. A Rookie Track is built specifically for new, young riders, who may then graduate to the Kiddie Grand Prix. Other rides include Formula 1, which was redesigned in 2014, and Lemans, which takes drivers through a series of twists and turns on an open track. The Cyclone Cart Coaster is the park’s newest ride. The 1500-foot long five-story tall track merges the thrill of cart racing with the feel of a roller coaster ride. Go-carts on this ride are built with twice the horsepower as the rest of the park.

History: Jolly Roger’s 30th Street location in Ocean City opened in 1964. The park is owned by Charles Jenkins, an area developer who owned the large piece of bayside property in the early 1960’s. The park originally opened as the Arnold Palmer Putting Course and Driving Range, a franchise built on the fame of the 1964 reigning golf champion. Just one year later, Jenkins added ten amusement rides to the park, and the site quickly became a top tourist destination. Over the next two decades the park continued to grow. The first go-kart track was added in 1970, setting the foundation for what would eventually become Speedworld. Splash Mountain followed, and by 2014, at the park’s 50th anniversary, they had been named America’s Best Small Waterpark by Funworld Magazine, an industry leader.

Ongoing Programs and Education: The Park operates on a pay-as-you-go model, which means there is no admission fee to enter the park grounds. As the premier family-friendly park in Ocean City, there is a diverse offering of rides for all ages. Groups of 25 or more may schedule with the park in advance to receive a significant discount on park rides.

Entertainment includes the Jolly Roger Free Circus. The Circus performs at the park twice daily during the summer months, and includes acrobats, juggling and thrilling circus acts, such as stunt motorcycle riders and trampoline acts. The Pirate Theater offers Pirate Shows twice nightly, featuring the park’s famous pirates, who can also be seen on many of the rides throughout the day, especially at the Treasure Golf attraction defending their treasure.

What’s Nearby: Jolly Roger at the Pier is Jolly Roger Amusement’s downtown Ocean City location. Purchased in 1974, ten years after the opening of Jolly Roger at 30th Street, the Pier location offers the same family-friendly entertainment.

More Things to Do in Ocean City, NJ

Baltimore to Philadelphia: Distance, Driving, By Plane, Train or Bus