Things to Do in Portland, Maine: Tate House 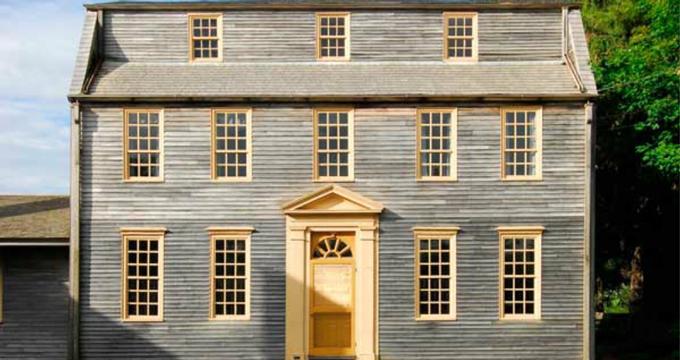 The Tate House is the only pre-Revolutionary home in the Portland, Maine area that is open to the public. The home serves as a glimpse into the life of 18th century colonists in Maine. The Tate House was constructed in 1755 for Captain George Tate who arrived in the New England Colonies in 1750 with his family.

Tate was the Senior Mast Agent of the British Royal Navy and oversaw the cultivation and shipment of White Pine wood to England.

Tate House is the only pre-revolutionary home in Maine that is open to the public and one of only two homes in the area with a subsumed dormor in the gambrel roof which was unusual at the time. The home is built in the Georgian townhouse style and overlooked the Fore River where the mast yard was located. Tate house was documented in 1936 by the Historic American Buildings Survey and is recognized as a National Historic Landmark.

The Tate House became a historic museum in 1935 and is owned by the National Society of the Colonial Dames of America in the State of Maine (NSCDA-ME). The Museum is a 501 (c)(3) and is managed and operated by a Board of Directors.

The museum and touring are only open June through October Wednesday through Sunday. More information on hours and rates can be found on the museum website.

The Tate House and raised bed herb garden attract visitors from around the world and provides many educational opportunities for students and families in the area who seek knowledge on Colonial times in the United States. The furnishings, architecture and artifacts are original to the home and Tate family. The clapboards even remain unpainted as they were at time of construction.

Means House Museum Shop- The Means House, right across the street from Tate House, is where visitors can find the Museum Shop. The shop is open year-round and is where visitors will purchase tickets for the home tours. Beeswax candles, handmade soaps, tea, books, keepsakes and other Colonial times souvenirs can be purchased in the store.

The Life & Times of Captain George Tate & Family Tour- This tour will highlight the mast trade that Captain George oversaw in Maine, what his responsibilities were, and Colonial life in the 18th century leading up to the Revolutionary War. These tours operate during open hours and are approximately an hour long.

Architecture Tours- Visitors will see the Tate home from rafters to cellar and be educated on the many architectural accolades that Tate House is recognized for. These tours must be scheduled by appointment with 24 hours’ notice given and are 1.5 hours long.

Garden Tour- specially trained docents will accompany visitors on these tours that must be pre-scheduled a day in advance. Visitors will learn about the various herbs used in cooking and medicine in the 18th century and how many of the plants had household uses.

School Tours-The Tate House is proud to host school field trips and community group tours with programs to help students grasp the concepts of Colonial life in America and 18th century Maine. Elementary school programs will include a tour and interactive experience with the Tate Family Trunk where they will learn about historic perseveration and handle reproductions of objects that would have been used in the Tate home in the mid-18th century.

Stroudwater Cemetery Tour- The Stroudwater Cemetery is the burial place of Captain George Tate and his wife, Mary, and all of the daughter-in-laws. All of the sons from the Tate family died abroad and are buried in countries including Russia and Poland. Other townspeople are buried in the cemetery as well and vistiors will learn about famous area people such as Lillian Stevens and “wolf man”. A cemetery researcher and docent will lead the tour, many times dressed in period costumes.

There are several annual events that are held at the Tate House for fundraising and educational purposed.

Poetry in the Garden- Local and famous poets are invited to read their poetry and discuss their writings during these evening events in the Tate House Garden.

Masquerade Gala- The annual fundraising event for the Tate House that features a Masked ball, adult beverages and food. Tickets must be purchased in advance.

Tate House 5k- This event is a run/walk at Spurwink Farm with all profits going to the Tate House Museum. Participants also receive admission to Colonial Frolic.

Colonial Frolic- The Tate House Museum goes to Cape Elizabeth where a colonial breakfast is served, the 5k is held, and food trucks provide refreshments all day. Volunteers and docents of the museum dress is period costumes with Colonial and Revolutionary War displays and reenactments.

Back to: Things to Do in Portland

The Lodge at Moosehead Lake, a Romantic Getaway in Maine

12 Best Things to Do in Bangor, Maine