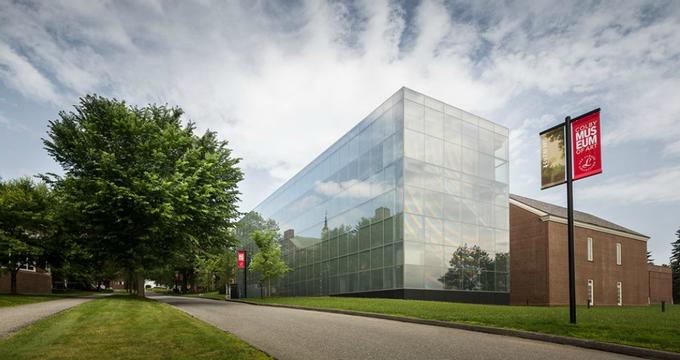 The Colby Museum of Art, located on the campus of Colby College, is a teaching and collecting museum that possesses a diverse art collection with an emphasis on contemporary and American art. Among its holdings is the American Heritage Collection, which includes 76 works of art by American folk artists. In 2013, the museum received the Lunder Collection, one of the most important art collections donated to a liberal arts college.

The collection provides a significant complement to earlier pieces of 19th, 20th, and 21st-century American sculpture, American paintings of the late 19th century, the Stieglitz Circle, and contemporary art. Some of the major artists included in the collection are Georgia O'Keeffe, William Merritt Chase, Robert Henri, Mary Cassatt, and John Singleton Copley.

The artwork of important American artists of the 20th and 21st centuries, such as Alex Katz, Terry Winters, Marsden Hartley, Fairfield Porter, George Bellows, and John Marin, can also be found among the art collection of the Colby Museum of Art. The impressive contemporary collection of the museum includes site-specific sculpture by Sol LeWitt and Richard Serra as well as works by Lois Dodd, Jennifer Bartlett, Elizabeth Murray, Adolph Gottlieb, Chuck Close, and Rudy Burckhardt, which were given as gifts from the Alex Katz Foundation. The contemporary collection is made up of over 8,000 works of art in all media, making the museum one of the premier institutions of American art in the country.

Alex Katz donated over 400 pieces of his artwork to the Colby Museum of Art in 1992. His works are now displayed in the Paul J. Schupf Wing, making the museum one of only a few in the country to have a wing devoted solely to the artwork of a single living artist. A number of major works of art by Katz were also given to the museum by Schupf, including Pas de Deux, a large-scale iconic painting from 1983. The museum's collection now comprises of almost 900 works by Katz.

The Colby Museum of Art's Bernard Langlais Collection features 183 works of art that trace the remarkable career Langlais, from his days at the Skowhegan School of Painting and Sculpture to his late years in Maine. The museum acquired 175 works by Langlais in 2010 from his estate, including over 90 works on paper, 65 works in wood, and twenty-one oil paintings. The John Marin Collection displays a retrospective collection of watercolors, paintings, photographs, etchings, and drawings. The career of the artist from 1888 to 1953 is represented through 24 works of art that were given to the Colby Museum by John Marin Jr. and Norma B. Marin in 1973. This core collection is ranked next to the collection of the National Gallery of Art in terms of size and media variety.

The complete print works of Terry Winters can also be seen at the Colby Museum of Art. In 1982, Winters started creating prints with Universal Limited Art Editions, and has worked in the full range of print techniques since his lithograph, Ova. His prints are often organized in serial groupings, displaying clusters of grids, knots, and spirals or free floating cellular structures.

14 Best Things to Do in Kennebunkport, Maine

15 Best Things to Do in Camden, Maine

25 Best Things to Do in Portland, Maine