Things to Do in Baton Rouge: Shaw Center for the Arts 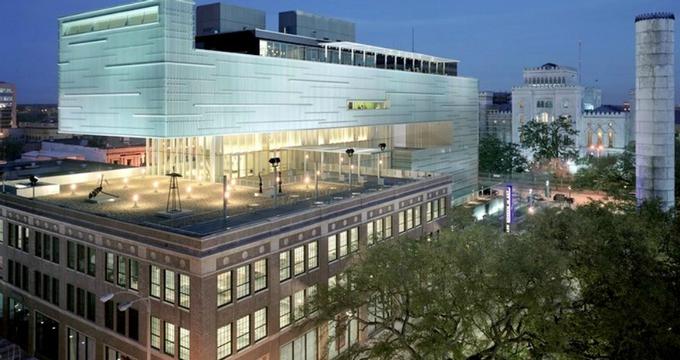 © Shaw Center for the Arts

Located in Baton Rouge, Louisiana, the Shaw Center for the Arts is a performing and fine arts complex housing several museums and arts organizations, including the LSU Museum of Art, the Manship Theatre, and the LSU School of Art Glassell Gallery. Opened in 2005 through the contributions of public and private funders, including its namesake the Shaw Group, the Shaw Center for the Arts complex was designed as a multipurpose arts and education facility for the city of Baton Rouge.

It encompasses nearly an entire city block of downtown Baton Rouge, near the city’s Old State Capitol. Designed by Boston architectural firm Schwartz/Silver Architects, the Center is noted for its unique translucent channel glass skin, produced by Germany’s Glasfabrik Lamberts. The Center has received several awards for its design, including the American Institute of Architects’ 2005 Gulf States Honor Award and 2008 National Honor Award, which praised the building’s use of contrasting materials.

Two Louisiana State University museums are housed within the complex, the LSU Museum of Art and the LSU School of Art Glassell Gallery. Founded in 1959, the LSU Museum of Art was originally located within the city’s Memorial Tower before its move to the Center in 2005. Today, it serves as the city’s only dedicated art museum, hosting more than 20,000 annual visitors. The University’s permanent collection is among the largest in the American South, holding over 6,500 regional and international pieces dating from the prehistoric through the present day, including a notable collection of Chinese jade works. A new exhibit, opened in 2016, presents one of the largest collections of Louisiana-produced art, exploring the state’s diverse cultural and social history. An extensive slate of art programming for the Baton Rouge community includes in-school art programs and collaborative presentations with local artists-in-residence.

The Alfred C. Glassell Jr. Exhibition Gallery serves as the official exhibition space for the University’s School of Art. Rotating exhibitions by School of Art students and faculty are presented at the gallery, along with exhibits by regional and national contemporary artists. Exhibits strive to present challenging works to visitors that inspire discussion and reflection and present a microcosm of the School of Art’s dialogue with the Baton Rouge community and beyond.

The Center’s flagship theater venue is the Manship Theatre, a theater complex anchored by the 325-seat Main Theatre, which hosts a variety of local theatrical and dance performances, concerts, and film showings. The Hartley/Vey Studio and Workshop Theatres serve as a “cultural laboratory” for the Baton Rouge arts scene, offering affordable performances by eclectic music artists and performing arts companies, as well as stand-up comedy shows, songwriter series, and other local arts events. In addition to its performance venues, the theater complex, which is named for local newspaper magnate Douglas L. Manship, Sr., also includes a gallery area. Also offering performing arts at the complex are the New Venture Theatre, which strives to present diverse works by new artists and provide educational outreach programming that emphasizes the empathy of the human experience, and Forward Arts, a literary arts nonprofit group presenting spoken-word performances, open mic nights, poetry slams, and in-school creative writing workshops.

In addition to its theaters and museums, the Center is also the home of several arts and cultural nonprofit organizations serving the Baton Rouge community. The Center for Planning Excellence is a community-planning organization that presents programming striving toward better quality of life for Louisianians, including economic stimulus programs, cultural identity preservation projects, and sustainability initiatives. New Schools for Baton Rouge, a community education partnership, seeks to employ resources to improve quality of education for all city students. Two organizations advocate for arts education in the Baton Rouge area, the George Rodrigue Foundation of the Arts, which strives to re-implement local arts education programs in public schools, and its subsidiary, Louisiana A+ Schools, a fully integrated research-based school network that incorporates art activities into all educational subjects across the curriculum.

In addition to performances by resident organizations and touring groups, many of the complex’s facilities may be rented for weddings, business events, and private special events, including the glass-enclosed River Terrace, which contains a balcony sculpture garden, and the Pennington Rooftop Terrace and Sculpture Garden at Tsunami. Event spaces at the Manship Theatre, the LSU Museum of Art, and the LSU School of Art Glassell Gallery are also available for public and private event rental.

More Baton Rouge things to do