8 Best Things to Do in Natchitoches, LA 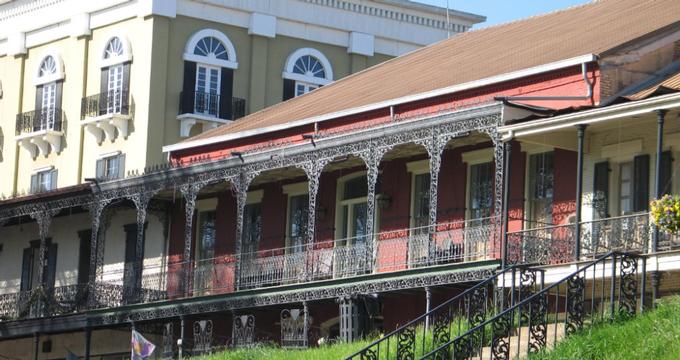 Natchitoches is a city in Louisiana founded by a French Canadian, Louis Antoine Juchereau de St. Denis in 1714. The city National Historic Landmark District includes beautifully restored French Creole townhouses, the Minor Basilica with magnificent stained-glass windows, and the still working 19th-century Kaffie-Frederick General Mercantile, the oldest general store in the city. The Cane River winds through the city towards the plantations that are part of the Cane River Creole National Historical Park. Fort St. Jean Baptiste State Historic Site, built in 1716 is also located in the city. The Louisiana Sports Hall of Fame & Northwest Louisiana History are part of the Louisiana State Museum. The J. Bennett Johnston Waterway Grand Ecore Visitor Center is located about four miles north of Natchitoches, perched on a 80-foot high bluff above Red River. 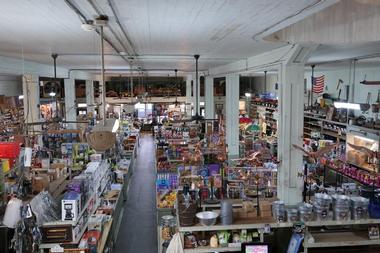 Kaffie-Frederick General Mercantile Store is the oldest general store in Louisiana. It is located in historic downtown Natchitoches and is a beloved city landmark. Established in 1863, the Kaffie-Frederick General Mercantile store is a trip to the past, still featuring everything customers remember from the times of their grandparents such as hardware, housewares, kitchen supplies, cookware, classic toys and gifts. The customers use the original freight elevator as well as their 1910 cash register. The Kaffie-Frederick General Mercantile store was founded by Jewish Prussian immigrants Adolph and Harris Kaffie, and is currently run by a third generation of Fredericks. As the times changed, the store changed with them. In the early 1900s, customers were coming for items such as harrows, John Deere plows, cultivators, clothing fabric, and even coffins. Today, the store still offers diverse products, a combination of items of historical value, as well as modern-day products such as gardening tools, kitchenware and swings. 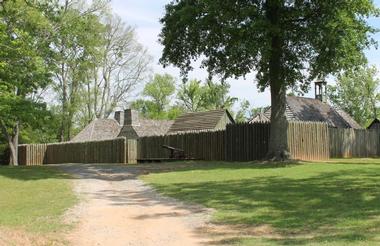 Fort St. Jean Baptiste State Historic Site, or Fort des Natchitoches is located in Natchitoches, Louisiana, and is part of the Cane River National Heritage Area. The fort was built in 1716 by Sieur Charles Claude Dutisné, who was sent to Natchitoches to build an outpost that would keep the Spanish forces in Texas from advancing to French Louisiane. The fort acted as a trading and military outpost and became a center of economic life in the area. Fort St. Jean was abandoned in 1764, when Louisiana was transferred to Spain. The location of the original fort is unknown. The fort was reconstructed in 1979, near the spot where the fort was probably located. The site hosts frequent living history re-enactments in period costumes, showing what life was like in the 1750s. 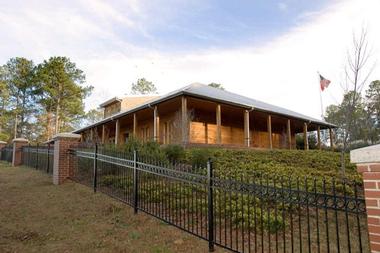 The J. Bennett Johnston Waterway Grand Ecore Visitor Center is located in the town of Grand Ecore, about four miles north of Natchitoches, Louisiana. It is perched on a 80-foot high bluff, offering visitors a spectacular views of Red River. The Center grounds are home to the local wildlife, art and historical displays and signs showing information on the waterway exploration and navigation in the area. There is also a walking trail from which visitors can see the Civil War entrenchments. Inside, there are nine exhibits that showcase the history of the waterway. There is also an interactive video that mentions prominent people who played an important role in the development of Natchitoches and the Red River Basin. The J. Bennett Johnston Waterway stretches 236 miles between Shreveport, Louisiana and the Mississippi River. It provides flood damage reduction, navigation, ecosystem restoration and recreational opportunities.

4.The Minor Basilica Of The Immaculate Conception 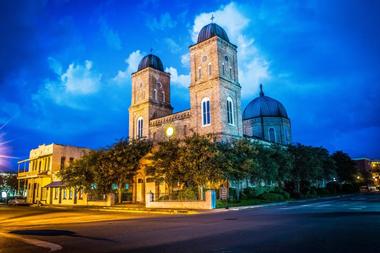 The Basilica of the Immaculate Conception is located in Natchitoches, Louisiana. It also acts as a parish church in the Diocese of Alexandria. The church building was once the cathedral for the Roman Catholic Diocese of Natchitoches. As the Church of the Immaculate Conception it is part of the Natchitoches Historic District and is registered on the National Register of Historic Places. After the parish was founded in 1728, the first church was built within the Fort St. Jean Baptiste sometime before 1733. A second church was named St. John the Baptist and was built by 1738 between the fort and what is now the American Cemetery. A third church, made of stone, was built in 1771 at the same location. The fourth church was constructed fourteen years later at what is now Front and Church Streets. A fifth church made of brick was 50 feet wide and 100 feet long probably at the site of what is now Church Street Inn. It was destroyed in 1838 in the Natchitoches fire. The sixth church was completed in 1839 and in 1853 became the first cathedral for the Diocese of Natchitoches.The present church was completed by 1905 and was transferred from Natchitoches to Alexandria. It was elevated to a Minor Basilica in 2009 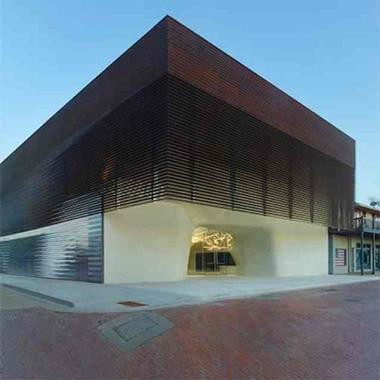 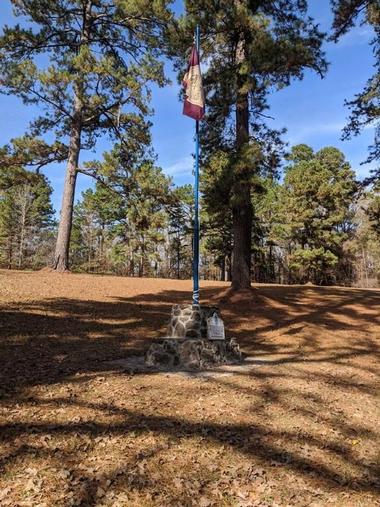 
Los Adaes was the capital of Tejas (Spanish Texas) on the northeastern border of New Spain from 1729 to 1770. Los Adaes included a mission San Miguel de Cuellar de los Adaes and a presidio Nuestra Señora del Pilar de Los Adaes, Our Lady of the Pillar of the Adaes. The mission was established to serve the indigenous Adai people living in the region and it was noted for the unique cooperation between the French, the Spanish and the indigenous Adaes people. The site is today protected in the Los Adaes State Historic Site in Natchitoches Parish, Louisiana. It is one of the most important American archaeological sites for studying colonial Spanish culture. 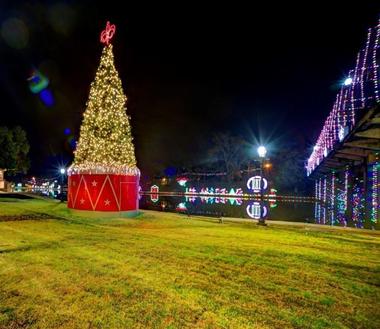 Established in 1927, Natchitoches Christmas Festival is one of the oldest community-based holidays in the country. It started as a one-day festival and has since evolved into a six-week long very popular Christmas Season. The Christmas Season starts on the Saturday before Thanksgiving and ends on January the 6th. Every night during that time, the city is decorated by more than 300,000 lights and 100 decorations. The Natchitoches Christmas Festival was a bright idea of Max Burgdorf, Superintendent of Utilities for the City of Natchitoches, Louisiana. He decided that the city needed special event to celebrate the Christmas and bought enough Christmas tree bulbs to light the entire Front Street and to create a set piece on the riverbank. The first Christmas set piece was a piece of metal in a shape of “Star of the East”. Since then, new pieces were made every year and until 2002 were permanently placed along the riverbank. 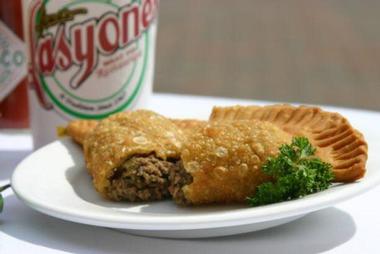 Lasyone’s Meat Pie Restaurant is a tiny, narrow eatery in Natchitoches, Louisiana serving authentic Creole Cuisine in a cozy, friendly atmosphere. Their menu is full of traditional Southern dishes made using old family recipes, but most folks come for their famous meat pies. Similar to a Latino beef empanada, their world-famous pies are made of flakey pastry filled with a savory, richly spiced meat and are shaped by hand in a crescent shape. Other items on their menu worth trying are the Crawfish Pie, Red Beans and Sausage, Dirty Rice, Southern Fried Catfish, Bread Pudding with Rum Sauce and their Thursday special Chicken and dumplings.

8 Best Things to Do in Natchitoches, LA

10 Best Things to Do in St. Francisville, LA

23 Best Things to Do in Baton Rouge, Louisiana