Best Things to Do in Las Vegas, Nevada: The Mob Museum 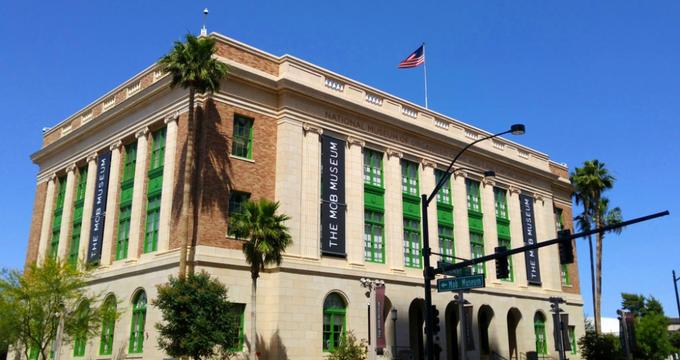 The National Museum of Organized Crime and Law Enforcement, commonly known as the Mob Museum, is a museum in Las Vegas, Nevada dedicated to the history of United States organized crime and measures by United States law enforcement to combat its practice. The Mob Museum is housed within the Las Vegas Post Office and Courthouse building on Stewart Avenue in downtown Las Vegas, which was constructed in 1933 and is now listed on the National Register of Historic Places.

The federal building was sold to the city in 2000, under the provision it would be restored and redeveloped as a cultural institution for public use. At the time, the city’s major was Oscar Goodman, a former defense attorney for noted mafia clients. Goodman’s idea to transform the post office and courthouse complex into a museum dedicated to United States organized crime was initially met with opposition from Italian-American cultural groups, though it was supported by groups associated with the Federal Bureau of Investigation.

After the project received approval, the museum’s exhibits were designed under supervision by Dennis Barrie, who served as a co-creator for the Rock and Roll Hall of Fame and the International Spy Museum. $50 million in funds were allocated for the project, nearly half of which were devoted to the historic building’s restoration. The museum was officially opened to the public in February of 2012.

Today, the museum is owned by the City of Las Vegas and operated by the 300 Stewart Avenue Corporation nonprofit organization. As a cultural and social history museum, the Mob Museum focuses on the contentious relationship between American organized crime syndicates and the law enforcement practices devoted to curtailing their operations. A number of large mob-related artifacts are held by the museum, including the historic Kefauver Hearings Courtroom, located on the museum’s second floor. In 1950, the courtroom was the location of a high-profile inquiry into mob activity in 14 cities across the country, spearheaded by Tennessee Senator Estes Kefauver. The reconstructed brick wall that served as the site of the 1929 Chicago Saint Valentine’s Day Massacre has also been reassembled at the museum, complete with blood stains and bullet holes where members of Bugs Moran’s gang were executed.

Visitor tours begin on the museum’s third floor at the Saint Valentine’s wall exhibit, where viewers can watch an orientation film about the history of organized crime in the United States since the prohibition era of the early 20th century. A Birth of the Mob exhibit chronicles the beginnings of organized crime in American cities at the turn of the 20th century, and a 100 Years of Made Men exhibit features a “wall of mobsters,” documenting the most notorious American mafia figures of the 20th century. Mafia practices such as casino money skimming are documented, along with police and federal measures instituted to counteract schemes, such as wiretapping. Other exhibits recount personal stories of experience with mafia members and depictions of mobsters within film and pop culture.

In addition to large exhibit items, the museum’s collections include authentic mafia weapons, such as an original Tommy gun that visitors can hold and aim, along with an electric chair used for mafia executions. Artifacts related to mafia deaths are displayed, including a barber chair where mobster Albert Anastasia was killed and a collection of photographs of famous mob-connected corpses, titled Mob’s Greatest Hits. Exhibits also focus on international mafia activity, such as Mexican drug cartel violence, and the history of the FBI and its famous figures, such as J. Edgar Hoover. Interactive digital exhibit stations are located throughout exhibit halls, along with video viewing stations playing mafia-related content.

Group tour rates are offered for groups of 10 or more, including secondary school student groups, though the museum is not recommended for elementary school groups due to the graphic nature of exhibits. Docent-led tours are offered for large groups, lasting approximately 90 minutes. Audio tours are also available in a number of languages, including English, French, Italian, and Spanish, and scavenger hunt materials may be obtained at the museum’s information desk.

Lectures for private groups and organizations are offered by the museum’s Speaker’s Bureau, and historic walking tours of downtown Las Vegas are available, led by museum docents and highlighting casinos and other sites with ties to mob activity. Periodic public special events include concerts, book signings, and receptions for temporary exhibit openings. The museum may also be rented by individuals and groups for private special events, including weddings, parties, and business conferences.