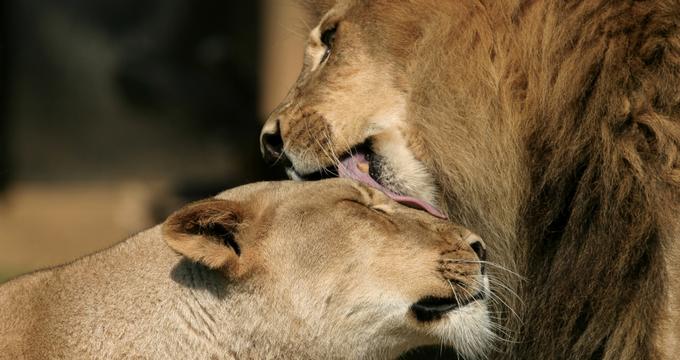 Located 12 miles from the Las Vegas Strip in Henderson, Nevada, the Lion Habitat Ranch is a 8 ½-acre wildlife conservation facility accredited by the Zoological Association of America that is home to more than 40 lions, as well as a number of other large animal species, including ostriches, giraffes, and birds.

The Lion Habitat Ranch is the vision of wildlife trainer Keith Evans, who purchased the land that now encompasses the ranch facility with his wife, Beverly, in 1989. The ranch was originally opened later that year as a private lion care, breeding, and training facility named the Cat House. Evans, a veteran wildlife trainer with more than four decades of experience working with lions, had worked with a number of live entertainment ventures, including a partnership with magician Doug Henning, when he was approached by the Las Vegas MGM Grand Hotel about the possibility of developing a wildlife exhibit for the hotel. From 1999 until 2011, the ranch’s lions were featured at the MGM Grand Hotel, showcased within a glass enclosed habitat developed at a cost of $9 million. Exhibit lions rotated in and out of the habitat under Evans’ training and care and were transported between the ranch and hotel daily.

When the MGM Grand Hotel underwent major remodeling in January of 2012, the lion habitat was removed permanently to make way for the Hakkasan and Beacher’s Madhouse areas, and as a result, Evans’ personal ranch was rebranded as the Lion Habitat Ranch and opened to the public. In 2013, the Lion Habitat Ranch rescued two ostriches and one lioness from the Las Vegas Zoo after it was closed to the public. That same year, four baby lion cubs were born at the ranch. In 2014, after a drop in commercial attendance, the ranch was granted 501(c)(3) nonprofit status, ensuring its continued status as an educational wildlife resource for the Las Vegas area.

Today, the 8 ½-acre Lion Habitat Ranch is home to a variety of large animal species, including its original lions and ostriches, several bird species, and a young giraffe. It is located on Bruner Avenue, approximately one and a half miles southeast of the city’s St. Rose Parkway, and is open to the public Friday through Monday mornings and afternoons. A staff of nine wildlife caretakers care for the facility’s animals and offer assistance and educational information on public tours, which include general admission options or 90-minute Behind the Scenes trainer tours.

All visitors to the Lion Habitat Ranch have an opportunity for extreme up-close experiences with the facility’s 47 lions, supervised closely by park trainers and staff, including opportunities to hand-feed lions for an additional fee. A number of photo opportunities are offered during tours, along with chances to discuss animal habits and ask questions with animal caregivers. The facility’s lions are active throughout the day and can often been seen jumping, swimming, climbing, eating, and interacting with each other. The history of each lion, as well as their relationship to the other lions at the Habitat Ranch, is presented as part of tour information.

The park is widely known for its resident giraffe, Ozzie, acquired from the Tanganyika Wildlife Reserve in Kansas. As the only giraffe located within the state of Nevada, Ozzie has developed a reputation as a “giraffe artist,” producing abstract paintings on canvas with the assistance of Henderson painter Donovan Fitzgerald of the Art de Vignettes Gallery. Visitors may observe the three-year-old giraffe at work and may purchase original prints at the ranch or online through the facility’s website. Meet-and-greet opportunities with Ozzie are also offered as part of the facility’s Behind the Scenes tour.

In addition to standard Behind the Scenes tours, trainer-led tours are offered for school groups and organizations. School field trip opportunities last one hour and include use of facility picnic tables. A Feast With the Beasts experience is also offered for groups and private special event rentals, allowing visitors to dine at a private table in a glass enclosure surrounded by the park’s lions. A variety of catering options are offered for Feast With the Beasts events, ranging from formal to casual, as part of partnerships with local restaurants and caterers.

As a nonprofit wildlife research facility, the Lion Habitat Ranch is dedicated to the conservation, care, and awareness of lions. In addition to commitment to the care of their own lions, the ranch works with several other national and international conservation organizations to improve the lives of lions and other large wildlife around the globe. Major partner organizations include Kenya’s Conservation International, the Campaign Against Canned Hunting, and SanWild.

More Things to Do in Henderson