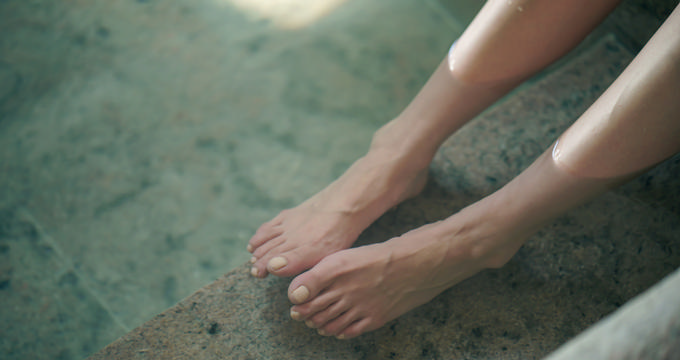 Montezuma Hot Springs is located six miles northwest of Las Vegas, Nevada. A main attraction of the now closed Montezuma Hotel in the late 1880’s; the springs have now been refurbished and funneled into several open-air cement-lined pools.

The breathtaking view from the springs includes the Gallinas River and several historical structures, among them what was once the Montezuma Hotel, now the administrative building of the United World College, which owns the land on which the springs are located and offers free public access to the springs. The pools are easily accessible from Highway 65, with no services or facilities other than the pools, guests park alongside the highway and walk along a short path through a break in the guardrail to the Hot Springs site. Visitors should bring their own towels, and wear comfortable, sensible shoes.

The series of small pools range from warm to very hot with temperatures averaging between 100 and 120 degrees. The larger pools have been colloquially named. Africa is named for its shape that resembles the continent, and the Lobster Pot, for its 120-degree waters. The hottest springs are closest to the road. The cooler pools are lined with moss and other naturally occurring algae, and are suitable for children due to their tepid temperatures. A large pool is located further down the trail, away from the smaller hot springs, and those with proper footwear may even venture down the hill to cool off in the Gallinas River below. The pools are rich in lithium and sulfur, and were historically used by the Apache to heal their wounds from battle, and cure them from illness. Revered as a sacred area, the Apache committed to laying down their weapons as the neared the springs, and no fighting ever took place in the area.

History: Montezuma is well known for the hot springs located there, and was even referred to as Los Ojos Calientes until the end of the 1800’s. The Montezuma Hot Springs have been used by Native Americans for centuries, for their healing, mineral-rich waters. In 1840, the entrepreneurial Mr. McDonald (his first name unknown) petitioned the Mexican government for ownership of the land, in exchange for becoming a Mexican citizen. He soon after built a small house adjacent to the springs, and began to charge admission. By 1846, the United States had taken the territory from Mexico, and set up an Army hospital at the site, which was eventually replaced by the Hot Spring Motel. The infamous outlaw Jesse James was once a guest at the hotel and legend has it that he and Billy the Kid soaked in the waters of the hot springs too.

With the arrival of the railroads in the 1880’s, tourism to the area increased and the town was renamed Montezuma. By the 1890’s, the springs were the main attraction at the Montezuma Hotel, now closed. Hotel advertisements at the time encouraged those with tuberculosis to heal in the waters of the hot springs, and in fact claimed the waters as a cure for all ailments other than advanced state heart disease, as visitors with this condition would be adversely affected by the location’s altitude.

In 1903 the Montezuma Hotel closed, and the site was subsequently owned by the Baptist Church, the Catholic Church, and the YMCA, all of whom made various attempts at monetizing the springs. Today, the site is owned by the Armand Hammer United World College of the American West, a two-year boarding school for students aged 15-19, offering an International Baccalaureate degree. The United World College maintains the pools and the surrounding area, and does not charge admission.

What’s Nearby: The Montezuma Hot Springs are located just a few miles away from Hermit’s Peak. The 10,300 foot tall mountain is located within the Santa Fe National Forest, and is named for an Italian spiritual hermit who lived in a cave there in the 1860’s. Also nearby is the Dwan Light Sanctuary, a conceptual art installation on the United World College campus. Designed in 1996 by the artist Virginia Dwan, the 36 foot wide and 23 foot tall building hosts a number of prisms that are aligned with the sun, moon and stars to reflect light throughout the structure at all time of day and night. The exhibit is open daily and free to the public. Visitors may enter by checking in at the United World College welcome center.

More Hot Springs near me