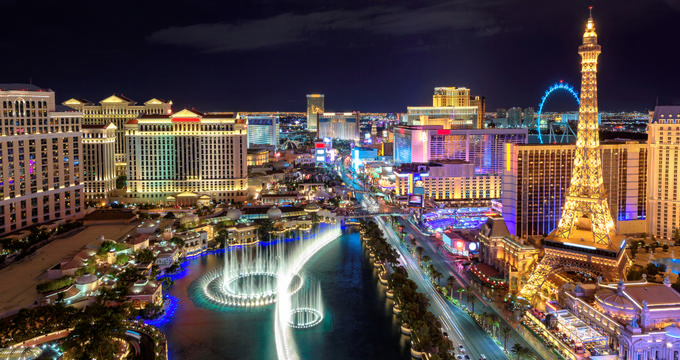 One of the hottest tourist destinations in the entire United States, Las Vegas is a location known in all four corners of the globe for its flashy hotels, exciting casinos, and diverse array of live shows and entertainment. Commonly known as The Entertainment Capital of the World, Vegas attracts countless visitors each and every year to its poker tables and slot machines, as well as hosting various outdoor activities too.

When planning a trip to Las Vegas, or anywhere else in the United States, it’s vital to consider in the weather conditions. Las Vegas is located in Nevada, which is actually one of the driest states of them all, seeing barely seven or eight inches of rainfall per year on average. This means that Las Vegas weather tends to be quite dry and hot, in line with conditions around the rest of the state. Temperatures are usually and humidity ratings tend to very low, with light winds and small chances of precipitation in general.

February is part of winter, the coldest season of the year all around the world, so it's no surprise that this is one of the coldest months for the city of Las Vegas too. According to records and averages, February is the third coldest month of the year for Las Vegas after December in second place and January in first. The average temperature tends to be 53°F (12°C) with average highs of 63°F (17°C) and lows of 39°F (4°C). In very rare cases, the temperature can exceed these limits. The highest temperature ever recorded in February in Vegas was 82°F (28°C) and the lowest was 16°F (-9°C).

In terms of precipitation, February is like many other months of the year for Las Vegas, meaning there's a very small chance of rain on most days of the month. According to statistics and yearly averages, this is actually the wettest month of the year for the city of Las Vegas, with up to 1 inch of rainfall expected to fall between the beginning and end of February. However, due to the dry conditions in the state of Nevada, a 'wet month' for Las Vegas isn't the same as it would be in many other cities. There is only around a 15% chance of some kind of rainfall per day in Las Vegas in February, and the city sees around six days of precipitation on average during this month.

Due to the dry, desert nature of Las Vegas and the surrounding state of Nevada, humidity levels in Sin City tend to remain relatively low throughout the year, including February. Humidity will almost never rise above 60% during this month and tends to remain relatively dry in general. Winds are also very calm at this time of year, ranging from 0m/s up to 7m/s, but averaging out at around 3m/s, which is classed as a gentle breeze. In terms of sunshine, Las Vegas gets nine hours per day in February, making it one of the sunniest months of the year.

Things to Do in Las Vegas in February

As February is one of the coldest months of the year in Las Vegas, as well as being the month with the highest chance of rainfall or general precipitation, it makes sense that many tourists and travelers tend to spend much of this month indoors. Outdoor activities like visiting nearby lakes and canyons, or simply walking around the Strip to snap photos and admire the hotels, are not recommended at this time of year but could still be possible if you stay warm.

Instead, the best options for things to do in Las Vegas in February include the city’s many indoor activities like the casinos and hotels. Simply walking around the various casinos is an activity in itself in Las Vegas, with many of these locations being richly decorated in various styles, equipped with various restaurants, gift shops, cinemas, video game arcades, stores, and various other unique attractions to keep people busy.

Gambling in the casinos is another popular Las Vegas activity in February, with a wide range of games to enjoy from roulette to poker. But if gambling isn’t your thing, many casinos and hotels also feature live shows and entertainment of all kinds. Resident comedy and magic shows like Carrot Top or Penn and Teller are available throughout the year, with many other music, theater, circus, comedy, and other kinds of shows waiting to be enjoyed all around Sin City.