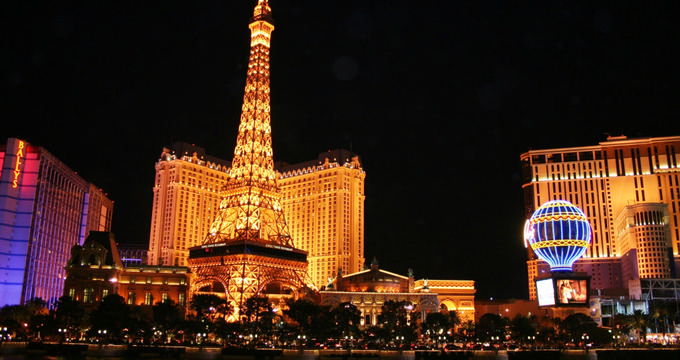 A city that never sleeps and never stops having fun, Las Vegas is well known for being one of the biggest entertainment locations not just in the US, but in the whole world. There are always dozens of things happening around Sin City, including non-stop casino action with every single game imaginable from roulette to poker, along with live comedy, music, theater, circus acts, and more. It’s the biggest city in Nevada and one of the most visited locations in the entire US, attracting tourists from all four corners of the globe who are keen to see its unique hotels and casinos for themselves.

Las Vegas is located in the state of Nevada, which is generally one of the driest states in the entire US, with barely seven inches of rainfall recorded each year. The state is mostly made up of deserts and dry canyons, so Nevada locations and cities like Las Vegas tend to have very warm and dry weather throughout much of the year. December is generally a cold month of the year, and December weather in Las Vegas can get quite cool compared to the rest of the year, but temperatures remain relatively mild when compared to other major cities around the US.

Las Vegas is a very dry city for most times of the year, with very low humidity ratings in general, and this continues through into December. December humidity in Las Vegas ranges between 25% and 60% on average, meaning that many days are quite dry but can get up to mildly humid from time to time. The start of the month tends to be the driest part of December in Las Vegas. During this month, Las Vegas has quite short days, with around seven hours of sunshine on average, and the wind speeds are quite low and calm in general, with very light breezes of around 3m/s on certain days. Overall, a typical December day in Las Vegas is quite dry and cool, with a low chance of precipitation.

Things to Do in Las Vegas in December

Due to the December weather conditions in Las Vegas being quite cold, this isn’t the best time of year to be staying outdoors or engaging in outdoor activities. Instead, things to do in December in Las Vegas include hanging out in the various hotels and casinos of the city’s Strip and other locations. Vegas is well known for being the home of many different luxury hotels with unique designs like pyramids and palaces.

Each hotel is also home to one or more casinos, and gambling is a very popular activity in Las Vegas, especially in December and other cold months of the year. All sorts of games can be played and enjoyed by adults only, including poker, blackjack, slots, roulette, and more. If you’re coming to Vegas to test your luck on one of these games, December is a good time to visit.

One more great thing to do in Las Vegas in December is catch a live show. At many hotels and other locations around the city, live concerts, theater performances, magic shows, comedy clubs, and more are being held every single evening. In fact, shows can even be enjoyed in the daytime at many locations and are a great way to spend some time indoors during the cold December weather of Las Vegas.