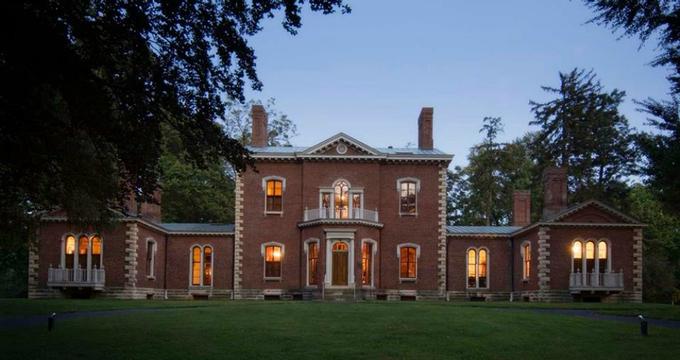 Ashland: The Henry Clay Estate is a National Historic Landmark in Lexington. The estate, operated by the Henry Clay Foundation, offers 1-hour tours of the home and gardens. Self-guided tours of the gardens only are free to the public.

Henry Clay (1777–1852) was an orator, statesman, and plantation owner who was influential in politics in the early part of the 19th century. A founder and leader of the Whig Party, Clay represented Kentucky both as a senator and in the House of Representatives, and enjoyed a long political career that began in 1803 and continued until just before his death in 1852. He served as Speaker of the House (1811) and Secretary of State (1824–1828) under President John Quincy Adams. Clay himself ran for president five times in the mid-1800s, but was consistently unsuccessful. Known as “the great compromiser” for his hand in brokering many of the significant treaties of the time, he had a full and influential political career.

Henry Clay died of tuberculosis in 1852 and left the estate to his wife, who then sold it to her oldest son, James Clay. James Clay rebuilt the original Federal-style mansion (which had been badly damaged in an earthquake) in 1854 to pay tribute to his father. He made certain to save as much as he could from the original house, and stayed true to the original floor plan, but updated the home to include details borrowed from the Italianate, Greek Revival, and Victorian architectural styles that were popular at the time. The project was completed in 1857. The home was sold to the University of Kentucky in 1866 and was occupied by the university’s regent until 1882. In 1883, Anne Clay McDowell, Clay’s granddaughter, purchased the estate from the university and it was her oldest daughter, Nannette McDowell Bullock, (Clays’ great-granddaughter), who founded the Henry Clay Memorial Foundation. The foundation purchased and restored the home after Nanette’s death in 1948, opening it as a museum in 1950.

The mission of the memorial foundation is to “promote the legacy of Henry Clay, to share his continued relevance locally and nationally as a great statesman, and to preserve his beloved ‘Ashland’ as a testament to his love of Kentucky and country.”

Originally 600 acres, the estate harvested hemp as the primary cash crop, along with merino sheep and other livestock. Today’s gardens consist of 17 acres from the original estate. It was Henry Clay himself who named the estate “Ashland” after the plentiful ash trees on the original property.

The Henry Clay Estate offers guided tours to visitors every hour on the hour. It is suggested that guests arrive 5-10 minutes prior to the start of each tour. Informative guides take groups through both the home and the gardens. Each tour lasts approximately 1 hour.

The Mansion Tour includes the 18-room mansion as well as the permanent Henry Clay exhibit room and a brief video about the life and history of Henry Clay. The mansion is home to one of the United States’ most extensive historical home collections, and includes furnishings, silver, fine art, books, and textiles. In the permanent exhibit room, one can browse through collections of Clay’s personal belongings, political writings, journals, farming records of the plantation, and rotating exhibits of featured items.

Self-guided tours of the grounds, including a Civil War Monument, are free to the public. On the grounds of the estate one will find the keeper’s cottage, a smokehouse, carriage house, and ice-house cellar system used for dairy storage. The original privy and slaves’ quarters have recently been excavated and are demarcated with signage as the museum works to restore them. In the spring/summer months one can enjoy the flowers of the gardens and a new outdoor café, which serves sandwiches, snacks, and cold drinks.

Educational programs are available for group tours. These include specially themed guided tours of the mansion and the gardens. Tour themes can be adjusted to suit the group’s needs and might include a focus on the artifacts of the home, Clay’s compromising skills, or the trees of the gardens. Classroom activities, assignments, and suggested reading to enhance your visit may be found on the foundation’s website at

Special holiday tours are offered November through December. The estate decorates around a different holiday theme each year. There is also a holiday market on the grounds at this time of year, which is free to the public. The museum is closed in January and open for groups only in February.

Guided tours for groups of 10 or more must be scheduled in advance.

Things to Do in Lexington, Kentucky: Hunt-Morgan House

Things to Do in Lexington, Kentucky: Aviation Museum of Kentucky