13 Best Things to Do in Siena, Italy 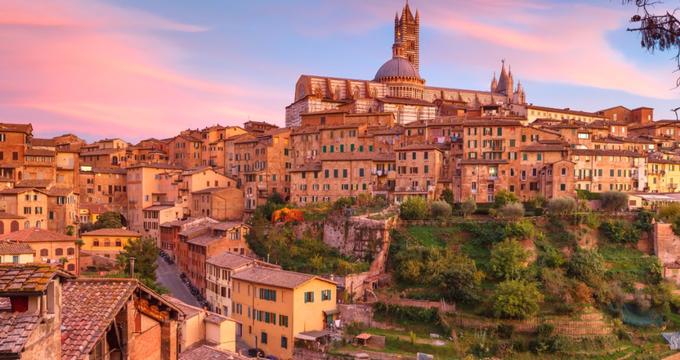 Siena is in the center of Tuscany in northern Italy, about halfway between Rome and Milan. UNESCO has declared the city's center a World Heritage Site. Siena's history dates back to the Etruscan occupation between 900-400 BC. Legend has it that the city's founders were the sons of Remus, who was killed by his brother Romulus, the co-founder of Rome. The sons fled Rome taking the statue of the wolf that suckled the brothers with them. This has become the town symbol and its colors are black and white. The town is a popular tourist destination with several churches, museums, restaurants and squares to explore. 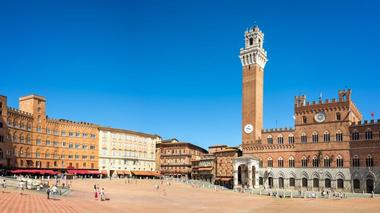 Much symbolism was incorporated into the design of the Main Square in Siena. It was placed at the point at which the boundaries of three original hilltop towns met. The square is divided into 9 sections, each representing one of the ruling governors. The sections fan out like a shell from the lowest point where the Palazzo Pubblico, the civic center of town, is situated. The square was intended to be a neutral space where everyone could gather for celebrations, festivities and games. In 1297 guidelines were laid down governing the architecture of buildings facing the square. These were intended to harmonize the square with its surroundings. 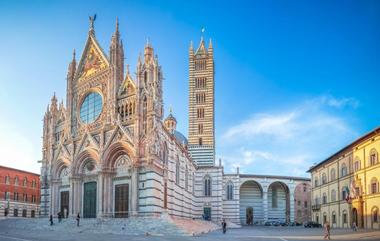 The Cathedral of Siena faces another piazza, above the Paizza Del Campo. It is a Gothic structure which took from 1215 to 1263 to complete. The duomo was built in the shape of a Latin cross and has one bell tower and a dome. The facades are adorned with paintings and numerous carvings. The black and white marble stripes of the exterior are mirrored inside on the supporting columns. There are several panels of mosaics on the floor, each telling a different story. Some are covered to protect them from wear and tear. A guide book explains the multi-faceted artwork in the duomo. 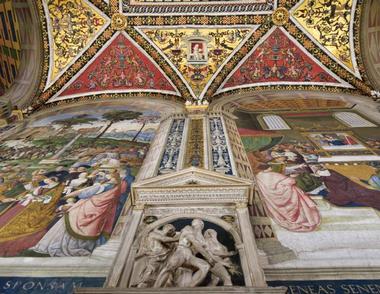 Since before the Duomo was constructed, this institution has been charged with caring for the site. It has taken on many legal forms over the centuries and is currently a non-profit organization. It preserves and promotes the cathedral complex which includes the physical structure, two museums and artworks from the cathedral and other churches in the diocese. The Picolimini Library is a collection of 10 frescoes depicting events in the life of Pope Pius II. Museu Dell Opera is the oldest private museum in Italy. There is also a Museum of Religious Art. The organization raises funds by charging admission fees. 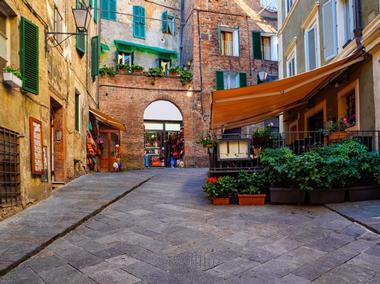 The 170 hectare area within the 7km long walls of the city was declared a World Heritage Site by UNESCO. This portion of the city is the embodiment of an authentic medieval city. It has a unity of design that is a testament to creativity and civilization. The cultural influence of the architecture extended beyond Siena, to Italy and other parts of Europe. Palaces and churches, fountains, tunnels and roads have all been preserved. The bastions, towers and ramparts still guard the city. There is no evidence of modern industrial development and threats from tourism traffic are being managed. 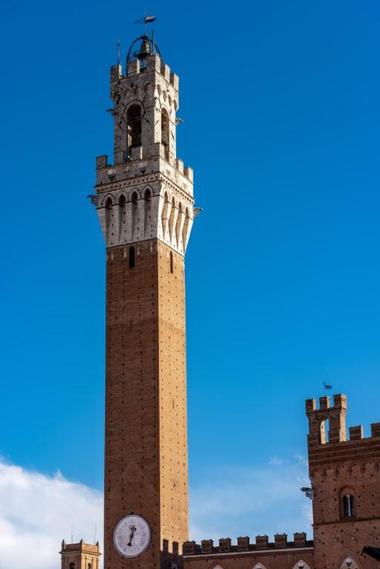 
The tower is part of the Palazzo Pubblico, the civic centre on the Piazza del Compo. At 102 meters, it was the highest secular tower and was built to be the same height as the tower on the cathedral, signifying that the state and church were equal. The walls of the shaft are three meters thick and made of red brick to represent the citizenry. There are three bells in the tower and the bellringer had to climb 400 stairs each way to ring them. Visitors can pay to climb to the top but must note that the stairs are narrow and uneven. 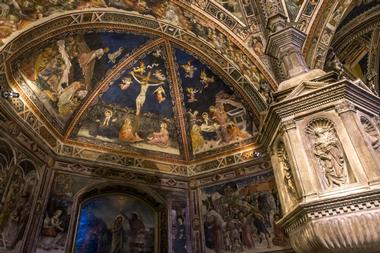 
The parish church of San Giovanni Battista was built in the early part of the 14th century. The interior has three naves with 12 panels of frescoes in the vaulted ceilings above them. The panels narrate the Articles of the Creed. Each panel has an apostle and a prophet depicted in the scene. In the arches and the walls there are additional frescoes. The baptismal font has a hexagonal base with six bronze plaques inlaid, aptly chronicling the life of John the Baptist. The church museum is open all year round but opening times change with the seasons. 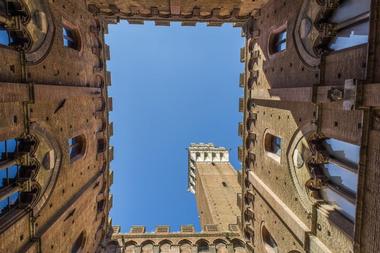 This museum is on the first floor of the town hall, the Palazzo Pubblico. It is accessible through a courtyard, the Cortile del Podesta which also leads to the tower. The major attraction in the museum is the series of secular frescoes. In the Hall of Nine, where governors took turns occupying and receiving visitors, the frescoes sent messages of good versus bad governance and the concept of justice. There are also scenes of life in the 14th century. In the Hall of the Globe, the knight on a horse and Madonna and angels frescoes dominate. The museum is open all year, except for Christmas day. 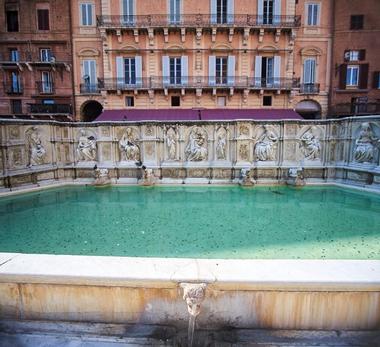 Fonte Gaia is situated in the Piazza del Campo. Its name means Fountain of Joy, so called because the residents reacted with joy when they first saw water gushing out of it. The water had been pumped through underground pipes from the countryside, 25 km away. Jacopa del Quarcia designed the statues that surround the fountain and completed them in 1419. The theme is motherhood and includes statues of the Virgin Mary, Roman matrons and the wolves that raised Romulus and Remus in Rome. In 1858, due to their degradation, the original statues were replaced with an identical series of reliefs. 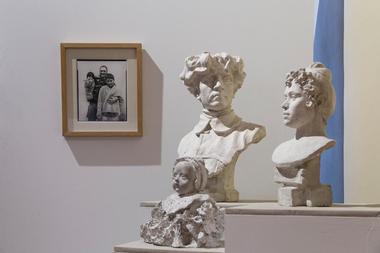 This museum is situated opposite the cathedral on the Piazza del Duomo. It was formerly a civic hospital for the orphaned and indigent, and pilgrims on their way to Rome. Financial support came from wealthy benefactors and it was managed by the rector and laymen. There are 12000 square meters of museum in the complex so there is much to see. Exterior frescoes have disappeared but those inside depict the life of the Virgin Mary. The ravaged statues of the Fonte Gaia and the story of their replacement can be found here. The Archaeological and Children's Art museums are also in the complex. 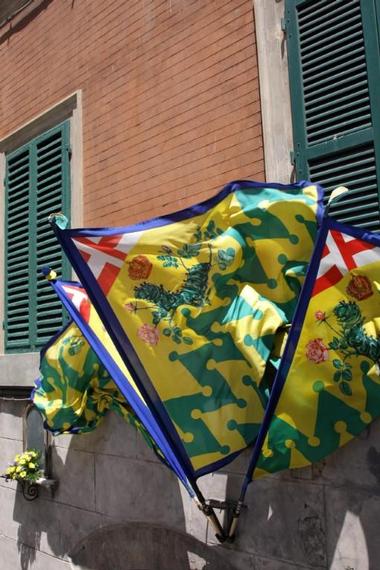 The Palio is the most important event in Siena. It takes place over two days, on 2 July and 16 August. It is a horse race contested by the city's 'contrada' or districts, each with their own emblems and colors. Horses are drawn by lots. The race takes place on clay, laid around the Piazza del Campo. The prize is artwork commissioned each year by different artists. The winning contrada keeps the canvas to hang in their local museum. Pageants, involving hundreds of locals in traditional costume, form part of the festivities. The piazza gets extremely crowded so it is not advised to take young children to the event. 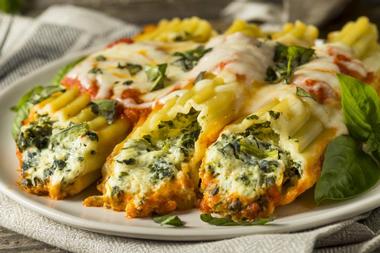 The Tavern of St Joseph is set in a cellar that was formerly an Etruscan house. It is 300 meters away from the Piazza del Campo, in the historic heart of the city. It is a small restaurant, owned and run by chefs, Matteo and Marco. They set out to merge the history, culture and cuisine of Tuscany when they meticulously restored the building and searched for old wooden dining tables. The wine cellar contains more than 600 labels of local, national and international wines. Booking is essential as this restaurant is very popular. 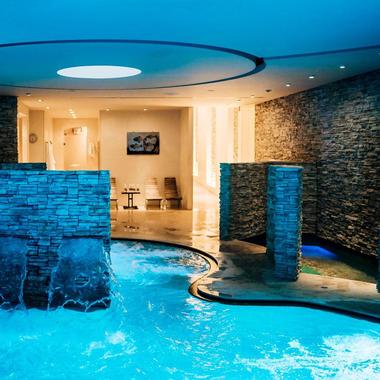 Set 23 km from Siena, in the Tuscan hills, is a restored castle which is now a hotel with 74 rooms. The view of the vineyards, woods, fields and cypress avenues is straight out of a Medieval fresco. There are two restaurants on the premises, one offering gourmet food and the other local delicacies. The wellness center has a spa, a sauna and a large whirlpool. Opera nights, musical concerts and recitals are held regularly. The hotel has a wedding planning service. Brides can choose to have the reception indoors or in the open air in the castle courtyard. 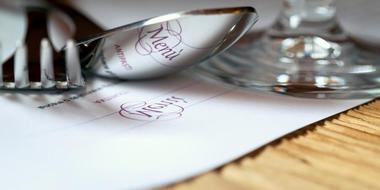 This wine restaurant is set in a 15th century building close to the center of the historic part of the city. The décor reflects the 1920s in Siena, with reproduction frescoes on the walls. The food also harks back to that era. The emphasis is on Mediterranean, Tuscan and Sienese flavors and the specialty is seafood. Meat dishes and vegetarian options are also available. The wine list, in particular the champagne list, is extensive. There is a 'secret room' for private functions and thematic evenings can be arranged. The guest book has intriguing entries from artists, politicians and even spies.

13 Best Things to Do in Siena, Italy