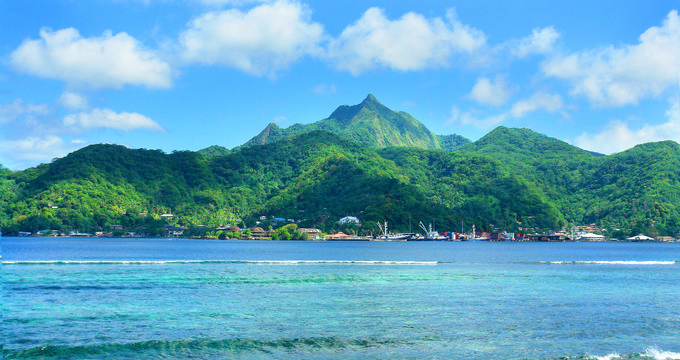 The National Park of American Samoa is located in the South Pacific, and spans three of the territory’s seven islands, Ta’u, Ofu and Tutuila. The only National Park south of the equator, the park protects approximately 9,000 acres of volcanic islands and another 4,500 acres of ocean and coral reef. Popular activities at the islands include hiking, snorkeling and diving.

The largest of the three islands is Tutuila, and the National Park occupies a portion of this island’s north shore, near the capital, Pago Pago. As the only portion of the park accessible by car, and the only island accessible by major commercial aircraft, this section of the National Park is the most visited. The Tutuila side of the park offers the most amenities and tourism services. It is still suggested that visitors to this island bring all their own snorkeling and diving gear, renting only air tanks from service providers. Due to the park’s remote location, regular dive shop services are unavailable and all boat trips to reef sites must be privately chartered. Nonetheless, many guests feel it’s well worth the trek, as the island is surrounded by over 950 species of fish, and more than 250 coral species.

Ten different hiking trails are located on Tutuila island, and range from easy, to moderate, to challenging. The Pola Island trail is among the easiest, offering a walk along the beach, while the Mount ‘Alava Trail and Mount ‘Alava Adventure trail are rated the most challenging, climbing to the Mount ‘Alava summit through tropical rainforests, past a banana plantation, and along a ridgeline that offers views of both the north and central side of the island.

Tutuila’s Blunts Point Trail is a moderately rated hike that arrives at the historic Blunt’s Point gun batteries, installed after the attack on Pearl Harbor in 1941 to protect the Pago Pago harbor and America’s interests in the South Pacific during World War II.

The island of Ta’u can be reached by small plane from Tutuila. The park’s moderately rated Si’u Point Trail begins adjacent to the airport and follows the coastline to Tufu Point and Si’u Point, before veering uphill towards the peak of the ancient volcano and the Laufuti Falls. The highest peak on the island is Lata Mountain at just over 3,000 feet.

Hikes allow for ample wildlife viewing. Rare birds on the island include the collared kingfisher, honeyeaters, tropical doves, and two species of colorful fruit doves. The abundance of fruit trees on the islands makes it the ideal habitat for the fruit bat. Three different species with wingspans up to three feet can be seen both day and night. The islands are home to the threatened Samoa Flying Fox, a species of Bat found in American Samoa, Samoa and Fiji. During the months of September and October, the humpback whale comes to the waters surrounding the islands to breed and nurse their young.

Ofu can only be reached by boat from Ta’u as there are no flights to the island. On the island of Ofu, the National Park spans the southeast shore of the island. Visitors to Ofu enjoy walking along secluded beaches, world class snorkeling, and viewing the tropical flora and fauna. Ofu is considered by most to have the best snorkeling conditions due to its crystal clear waters and isolated location. A natural bridge made of shallow coral reef connects Ofu to its twin island, Olosega, now protected by a more easily accessible single lane road that spans the shallow crossing. Both islands combined are just 5 square miles, making exploration by foot a viable option. One of the National Park’s most challenging trails, the Tumu Mountain Trail is on the island of Ofu and climbs from the shore to the peak of Tumu Mountain, at just over 1,600 feet. Those who summit enjoy extraordinary 360 degree views of the island and surrounding coral reefs.

History: The National Park of American Samoa was designated in 1988. Due to communal land use on the island, the land could not be outright purchased, but has been leased to the National Parks Service via a 50-year lease, which began in 1993.

Ongoing Programs and Education: Each of the park’s three islands are involved in studies of global warming and its effects on the coral reefs. These baseline studies are valuable reference points for establishing a warning system as temperatures begin to rise throughout the South Pacific, affecting marine life. On land, the park’s staff studies threats to native plant life from invasive species, including the “mile a minute vine” and the invasive shrub, Koster’s Curse.

Park staff are available as guest speakers for local school programs, and schools are invited to use the park as field trip locations, especially on the island of Tutuila.

15 Best Things to Do in the Solomon Islands