Iowa City Things to Do: University of Iowa Museum of Natural History 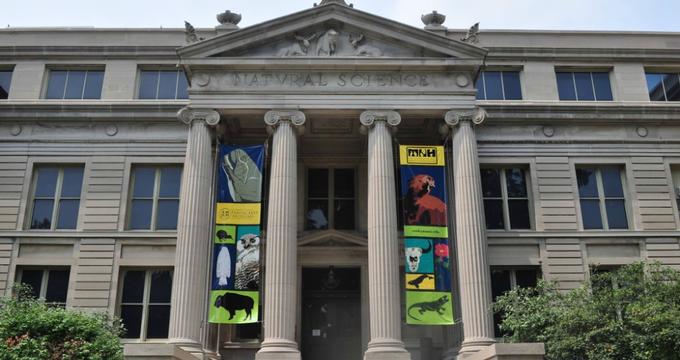 A cabinet of natural history exhibits was showcased within the Iowa Old Capitol Building, which was integrated into the UI campus following the state capital’s move to Des Moines in 1857. University natural history professor James Hall was appointed as curator of the cabinet exhibit, but failed to assume his duties, a decision likely influenced by the university’s 1855 bankruptcy. As a result, faculty member Theodore S. Parvin became the university’s first acting natural history curator in 1859. Early museum collections focused on the state’s geology due to the formal geological surveys of the area occurring at the time, though later curators incorporated zoological collections throughout the later part of the 19th century. Charles Nutting, who assumed curatorship in 1886, is credited with large expansions to museum collections due to a series of international biological study expeditions. The expansion of collections facilitated the museum’s move to a larger permanent facility in 1895, named the Natural Science Building.

Today, the University of Iowa Museum of Natural History retains its 1895 location in the university’s Natural Science Building, renamed MacBride Hall in 1934. Together with the historic Old Capitol Building museum facility, the museum is part of the university’s Pentacrest Museums system, which presents a variety of integrated public special event programming throughout the year connected to the state’s natural, cultural, and civic history. As a major natural history collection and research facility, the museum is noted for its extensive collections, which comprise one of the largest natural history collections of any American university.

Exhibit areas within the museum include Iowa Hall, which takes visitors on a 500-million-year journey through the state’s natural and cultural history, and the Biosphere Discovery Hub exhibit, which examines humanity’s relationship with the changing natural environment. Taxidermy and fossil holdings are showcased in the museum’s Mammal Hall, which is anchored by a complete 47-foot Atlantic right whale skeleton, the William and Eleanor Hageboeck Hall of Birds, which displays more than 1,000 bird specimens, and the Diversity of Life Exhibits, located at the museum’s ground floor entrance. A Laysan Island Cyclorama exhibit also recreates the environment of a Hawaiian atoll in 360-degree panoramic view.

A wide variety of public educational programming is offered by the museum, including curriculum-incorporated field trip opportunities for elementary and secondary students and facility tours for community groups. A Discovery Trunk program brings museum specimens and collections directly into Iowa classrooms, while a Mobile Museum showcases traveling exhibits at area educational and family events. Workshops with University of Iowa instructors may also be scheduled at the facility, along with outreach visits to community groups and centers throughout the eastern Iowa area.

Periodic public special event programming is held at the museum in conjunction with the Iowa Old Capitol Building museum, including Adult Art Nite events, a Science Cafe Explorers Seminar series, a Makerspace Thursdays event series, and a Movies@MNH film series. Other annual public special events include a Pentacrest Museums Family Weekend event in April, a weeklong Pentacrest Museums Summer Camp, and Read on the Rug toddler activity groups. The museum also offers a public Escape Room, which may be rented for teams of five with advance online registration.

The museum is noted for its research initiatives related to the fields of geology, biology, and anthropology, including its Tarkio Valley Sloth Project, which excavated the skeletons of three giant ground sloths near the city of Shenandoah in 2001. Other major excavations completed include a woolly mammoth dig in Mahaska County in 2010 and a giant short-faced bear discovery in Cass County in 2008. Research and excavation projects frequently work in collaboration with other university and regional organizations, including the Paleontology Repository and the Office of the State Archaeologist.

More Things to Do in Iowa City

Things to Do in Iowa: Buffalo Bill Museum

Things to Do in Iowa: Des Moines Art Center

25 Best Things to Do in Des Moines, Iowa