Things to Do in Chicago, Illinois: DuSable Museum of African American History 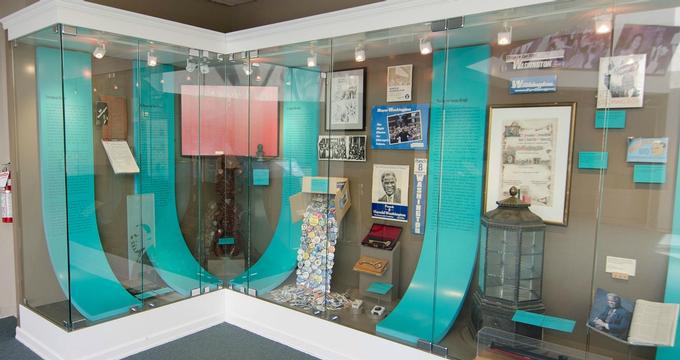 Dr. Margaret Burroughs founded the DuSable in 1961 with several other prominent Chicago figures in her home. The museum was developed to honor and preserve African American history and celebrates the achievements of African American people in the United States. In 1971, the museum finally found a permanent home in the current building. The Museum holds more than 15,000 artifacts related to African and African American history, people, culture and biology and an expansion was needed in 1993.

The DuSable Museum is currently working on another expansion called the Roundhouse Project that will make the museum the first African American Museum Campus in the country. The Roundhouse was built in the 19th century and was intended to be used as a horse stable. The Roundhouse is being renovated to include the library, additional galleries, a club house, the Sutton Technology and Language Lab, classrooms, and enlarging the museum store.

The Museum is open every day but Monday and closed on specific holidays. Wheel chairs are available onside and the museum is completely ADA compliant. While strollers are allowed, there are none available for loan at the DuSable. The museum also participates in the Blue Star program, offers reduced admission for Chicago residents with free days offered on Tuesdays.

There are several permanent exhibits at The DuSable and many temporary or special exhibitions throughout the year. All exhibitions relate to the culture or history of Africa or African American peoples. Some of the special exhibits that have been featured at the DuSable focus on prominent figures in African American society and their achievements, pop culture, a specific history topic or event, or artist.

Red, White, Blue & Black: A History of Blacks in the Armed Forces- This permanent exhibition features over 100 artifacts from the museum collection from the period between the Revolutionary and Vietnam War. Spanning nearly 200 years of history, the history of African American’s service in the military is explored.

Geoffrey & Carmen: A Memoir in Four Movements- This web exhibition follows the lives of Tony Award winning director and choreographer Geoffrey Holder and his wife, dancer and actress Carmen DeLavallade. Featured are more than 90 works of art from sculpture to photographs, costumes, and books to the designs by the couple. This collection is featured in a web gallery linked through the DuSable website.

A Slow Walk to Greatness: The Harold Washington Story- Visitors to this exhibit will learn the history and significance of Mayor Harold Washington with more than 150 artifacts, an animatronic likeness of the mayor, and other exhibits celebrating the life of Chicago’s first African American mayor.

Freedom, Resistance, and the Journey Toward Equality- This exhibit explores the history of Africans in America from the Atlantic Slave Trade through the slave system in the United States. Visitor will experience racial segregation of the 20th century, learn about Jim Crow, and the achievements of the first African-American President, Barak Obama.

Freedoms Journey- This is the online version of Freedom, Resistance, and the Journey Towards Equality. Community members are encouraged to upload their own stories and pictures.

There are many special events that occur throughout the year at The DuSable. These events are meant to celebrate and educate the community on African American history and arts. There are several jazz series concerts throughout the summer yearly, monthly film showing, and the annual Arts and Crafts Festival held every July.

The DuSable can also be rented for private events such as weddings, receptions, meetings, birthday parties, corporate functions, and other engagements. An information request form is available online. Certain events are prohibited as well as the use of certain machines, materials and live animals. More details can be found on the museum website.

The DuSable Museum of African American History encourages visitors to experience learning through creative and imaginative workshops, lectures, and performing arts opportunities. There are workshops available for educators and students, Special teaching training seminars, performance tours available for in school programs, and after school programs available including matinees at the Illinois Black Legislators Auditorium. Groups of 10 or more must make a reservation for guided tours. Treasure Hunts, and self-guided tours are also available to groups visiting the museum.

The DuSable Mobile Museum is also available for onsite programming for students or groups that cannot physically visit the museum. This traveling exhibit showcases the life of Jean Baptiste Point DuSable who was the first non-native person to reside in Chicago.

Groups visiting the DuSable Museum of African American History should keep in mind that there is no lunch facility at the museum and backpacks and large purses are not allowed inside the galleries. Photography is also prohibited.

Things to Do in Chicago, Illinois: Millennium Park

Things to Do in Chicago, IL: Art Institute Chicago

25 Best Things to Do in Illinois