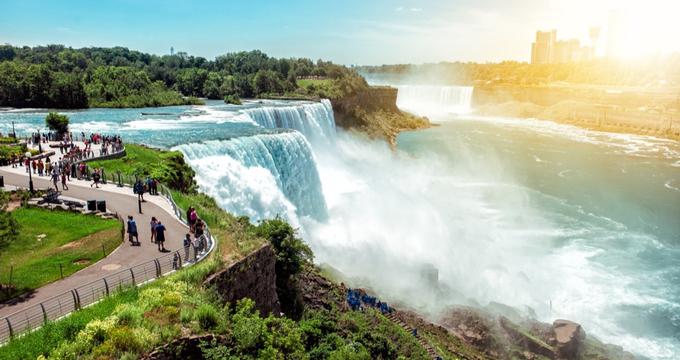 North America is home to some truly extraordinary natural wonders and landscapes. From the Grand Canyon in Arizona to the towering majesty of Denali in Alaska, a vast spectrum of scenery is just waiting to be discovered and enjoyed all over the continent. One of the most famous and popular natural landmarks in all of North America is undoubtedly Niagara Falls. CDC information for travelers. Hours/availability may have changed. 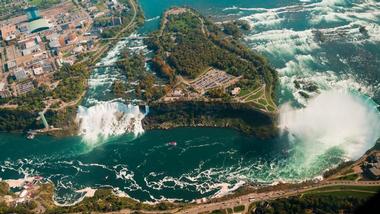 Niagara Falls is made up of three separate waterfalls situated right on the border between Canada and the United States, shared by the Canadian Province of Ontario and the state of New York. Known individually as the Horseshoe Falls, the American Falls, and the Bridal Veil Falls, these extraordinary waterfalls have inspired and amazed countless people for many generations.

Many people dream of visiting Niagara Falls someday, and doing a day trip to this North American natural wonder isn't as difficult as you might think. In fact, many people who travel to New York City choose to do day trips up to the falls, and there are a few different options available. Here’s how to plan a dream day trip to Niagara Falls from New York City.

Getting to Niagara Falls from New York City

Niagara Falls State Park is around 400 miles away from New York City. To many people, that distance seems simply too far for the purposes of a day trip. However, if you set off early enough and choose the right modes of transport, you can do a day trip to Niagara Falls from NYC and still have plenty of time to explore and enjoy the falls themselves. Your options for this day trip including driving, taking an organized tour, or flying.

2.Getting to Niagara Falls from New York City by Car 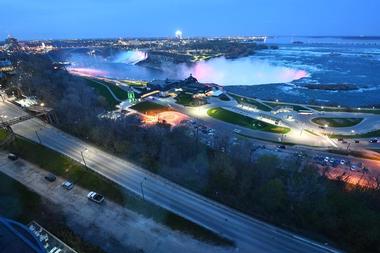 The drive from New York City to Niagara Falls is a long one. It can take around six and a half hours, on average, and the fastest way is to follow the I-80 out of NYC, then the I-81 towards Syracuse, and then the I-90 over towards Buffalo and Niagara Falls.

It’s a long drive and can be a tiring one, so having multiple drivers and switching halfway is a smart idea to stay safe. Since the drive is so long, it also makes sense to set off early in the morning, with many people beginning their day trip to Niagara Falls at around 4am.

3.Getting to Niagara Falls from New York City on a Tour 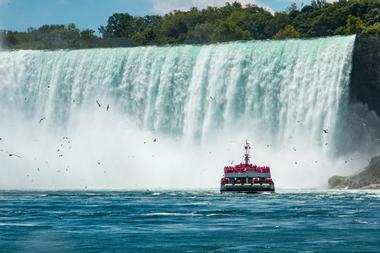 Various tour companies run direct trips to Niagara Falls direct from New York City. A lot of these trips leave from key downtown locations like Times Square, so it's very easy to get to the starting point if you're staying in Manhattan or nearby. You'll travel on a coach, and the trips usually depart at around 4am or 5am in order to arrive at Niagara Falls in good time. The coaches are typically equipped with lots of modern conveniences like Wi-Fi, air conditioning, restrooms, and more.

The drive is a highly scenic one, too, so you can take photos along the way and admire the view. Once you arrive at Niagara Falls, you'll have a dedicated tour guide to show you around, telling you about the history of the falls and taking you to some of the key landmarks and viewing spots, and you'll also get some free time to explore on your own and maybe even dine at the famed 'Top Of The Falls' restaurant before heading home.

4.Getting to Niagara Falls from New York City by Plane 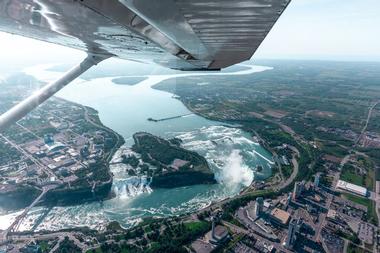 Considering Niagara Falls State Park is several hundred miles away from NYC and the drive can take over six hours, many people choose to take a plane instead. This is the fastest way to get to Niagara Falls from NYC, and you can take a direct flight from JFK, LaGuardia, or Newark up to Buffalo.

Flight times tend to be around an hour, so the actual journey from NYC to Niagara Falls is much faster in a plane than it would be on the ground, even when you add on the time needed to get to the airport, check-in, and go through security. Once you arrive at Buffalo, you'll be about 20 miles away from the falls, so you can simply rent a car or take a transfer over to the park.

You are reading "New York To Niagara Falls Day Trip this Weekend with Friends" Back to Top or More places to see near me today, Weekend trips

5.Important Information and Things to Do at Niagara Falls 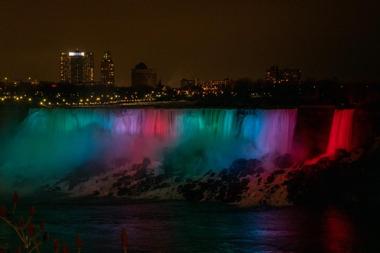 
- Getting Around - Niagara Falls actually has its very own hop-on, hop-off shuttle bus. It's called Discover Niagara and it's totally free, so it's one of the best ways to get around at the falls. The shuttle takes you to over a dozen destinations around the falls and beyond, with several shuttles operating on a daily basis.

- Best Time to Visit - The best time to visit Niagara Falls is arguably in the summer. You'll have to deal with the big crowds of tourists, but you'll also get the best weather and the best overall experiences in terms of viewing the falls, taking photos, and making memories to look back on. If you really want to avoid the crowds, heading to Niagara Falls in the shoulder months of April/May and September/October is a good idea.

- Things to Do at Niagara Falls - There's plenty to do at Niagara Falls in addition to admiring the waterfalls themselves. You can head into the 300+ seat Adventure Theater for a fascinating 30-minute movie about the history of the falls, and be sure to take a walk around the Visitor Center to learn more. The Aquarium of Niagara is a popular spot with families too, being home to hundreds of animals of many different species, including sharks and penguins. The 'Cave of the Winds' by the Bridal Veil Falls is one of the best places to experience the full power of Niagara Falls and get some amazing views, but you'll probably get wet so be sure to take a poncho. Visitors should also head up to the Prospect Point Observation Tower for unparalleled views of Niagara Falls.

You are reading "New York To Niagara Falls Day Trip this Weekend" Back to Top or More places of interest in, Things to do near me

Located in Niagara Falls, New York on the American side of the Niagara Falls waterfall, the Niagara Gorge Discovery Center is a multipurpose museum highlighting the geology, industry, and local history of the Niagara River region. The museum center commemorates the site of the historic Schoellkopf Power Station facility and also serves as a trailhead for a number of the park’s hiking trails.

The Discovery Center is located at the site of the former Schoellkopf Power Station, one of the United States’ first hydroelectric power plants. In 1877, Jacob F. Schoellkopf purchased a plot of land on the Niagara Gorge, located 1,600 feet downriver from the current location of the Niagara Falls International Rainbow Bridge, for the purposes of operating a hydraulic canal for harnessing the Falls’ natural energy. During its tenure, first under the umbrella of the Niagara Falls Hydraulic Power and Manufacturing Company and later as part of the Niagara Falls Power Company, the plant was the largest and widely considered to be the greatest hydroelectric power plant of its kind in operation.

The Schoellkopf Power Station complex included three main plant sections, as well as offices and other facilities located at the top of the Niagara Gorge. In June 1956, the second plant, located immediately in front of Schoellkopf's original facility, experienced structural damage from water seeping into its back walls, and as a result, the majority of the facility collapsed into the Niagara River on June 7, in one of the most catastrophic plant failures of its kind on record. More than two-thirds of the facility was destroyed, including six generators, resulting in a total of $100 million in losses. While one of the facilities, Station 3A, remained in limited operation until 1961, the majority of the plant’s remaining structure was razed immediately following the collapse. The disaster is credited with the 1957 passage of the Niagara Redevelopment Act, which transferred management of similar plants to government authority rather than private ownership.

Today, the Niagara Gorge Discovery Center operates above the remains of Station 3A. As part of Niagara Falls State Park, the oldest state park in the United States, the museum operates in conjunction with many American side Falls attractions, including the famous Maid of the Mist tour boats, which shares use of the former power plant area as an off-season storage yard. Visitors may explore the Center as an individual attraction or as part of the Niagara Falls USA Discovery Pass series, which offers access to a number of American-side attractions, including the Cave of the Winds, the Niagara Adventure Theatre, and the Aquarium of Niagara.

The Discovery Center building sits at the top of Niagara Gorge, above the power plant remains. The Center features a number of exhibits, including a 180-degree multi-screen theater, chronicling the natural history of the area and detailing how the Niagara River’s current carved the Gorge and Falls over the course of its 12,000-year flow. The area’s geological history is preserved with exhibits on the ancient rock layers of the gorge, with a climbing wall incorporating natural fossil and mineral specimens, and a local history exhibit commemorates the Great Gorge Route, a famous trolley route operated by the International Railway and Niagara Gorge Railroad during the early part of the 20th century. As of 2013, visitors can also ride an elevator shaft outside the facility down to tour the ruins of the Schoellkopf Station.

The Discovery Center facility is also home to the Niagara Gorge Trailhead Center, which serves as a trailhead for a number of hiking and biking trails throughout the park. It offers convenient access to the Robert Moses Parkway Trail, a multi-use pedestrian and biking trail that provides access between Whirlpool and Devil’s Hole State Parks and the Robert Moses Power Plant. Additionally, four guided hikes are offered throughout the park’s operating season for an additional fee, which runs from mid-May through October. Two easier hikes are recommended for beginners, the hourlong all-ages Great Gorge Scenic Overlook Hike and the two-hour Upper Great Gorge Hike, which allows visitors to explore the Great Gorge Railway Trail. The moderate-level Devil's Hole Rapids and Giant Rock is a 2.5-hour roundtrip suited for ages eight and up, and the challenging Whirlpool Rapids Adventure Hike offers experienced hikers a three-hour adventure complete with boulder hopping. All hike participants must be equipped with appropriate footwear, as conditions on the trails are continuously changing due to weather and natural erosion. Visitors may also embark on self-guided tours starting from the Center, although they must stay on marked trails at all times and avoid entering the water.

More Things to Do in Niagara Falls

Day Trip From London To Scotland