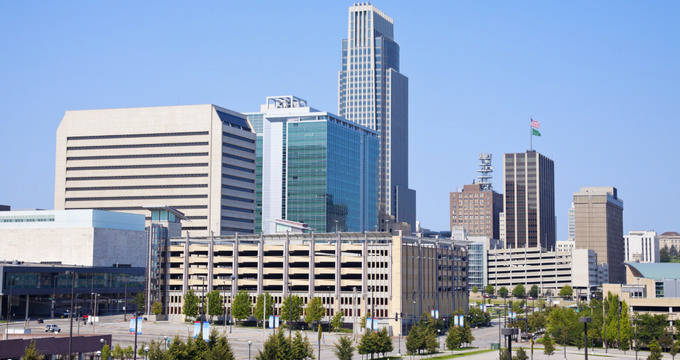 Situated in both the Midwest and Great Plains regions of the United States, Nebraska is the 16th biggest state in terms of area but has the 37th biggest population, resulting in this state being one of the most sparsely populated areas of America. Nebraska covers an area of 77,358 square miles and has an estimated population of 1.92 million. Nebraska has borders with the following states: South Dakota, Missouri, Iowa, Kansas, Colorado, and Wyoming.

Nebraska has the unique distinction of being the only 'triply landlocked' state of America, meaning that one would have to travel through three separate states in any direction in order to reach the coast. The Missouri River runs along the eastern side of Nebraska, which became the 37th official state in 1867. The largest city in Nebraska is Omaha, and the biggest metropolitan area is the Omaha-Council Bluffs metro. The capital city of Nebraska is Lincoln. Read on for some additional details on the largest cities of Nebraska.

Situated in Douglas County, of which it is the county seat, Omaha is the biggest city in the state of Nebraska. It is located on the Missouri River, not far from the Platte River, in the eastern part of the state. Omaha covers a total area of 130.58 square miles and has an estimated population of 466,000, with over 975,000 in the surrounding metropolitan area.

Omaha is a key industrial and business hub for the state of Nebraska, being home to four Fortune 500 companies and many other major corporations. The city was founded in 1854 and incorporated just a few years later, in 1857. In the 19th century, the city was seen as a key transportation hub, linking the east and west parts of America and earning the nickname 'Gateway to the West'. Over time, the city developed its own industries and built up a successful economy that has stayed strong in the modern era.

Lincoln is located in Lancaster County and is the state capital of Nebraska. It is the second biggest city in the state and one of only two cities (with the other being Omaha) to have a population exceeding 100,000. Lincoln covers an area of 94.267 square miles and has an estimated population of 258,000.

This city is situated in the southeastern part of the state and was founded in 1856. It was originally called Lancaster but the name was changed to Lincoln, in honor of Abraham Lincoln, in 1867. The city of Lincoln is home to the University of Nebraska, which was established in 1867 and is one of the biggest employers in the area. Over 25,000 students attend this university each year, making Lincoln a big college town.

Located in Sarpy County, Bellevue is the third largest city in all of Nebraska. It is located in the eastern part of the state and is technically a suburb of the city of Omaha. Bellevue covers a relatively small area of 16.02 square miles and has an estimated population of 53,000.

This city is officially regarded as the second oldest settlement of Nebraska and was founded at some time in the 1830s, before being incorporated in 1855. The name of this city comes from a French word meaning 'beautiful view'.

Situated in Hall County, of which it is the county seat, Grand Island is the fourth biggest city in Nebraska. This city is located in the central eastern part of the state and covers an area of 28.55 square miles.

Grand Island has an estimated population of 51,000 and is the main city of the Grand Island metropolitan area, which also includes Merric, Howard, and Hamilton Counties. One of the major locations in Grand Island is the Nebraska Law Enforcement Training Center, which is the only training location of its kind in the state.

Located in Buffalo County, of which it is the county seat, Kearney is the fifth biggest city in Nebraska. Due to the state's relatively small overall population, Kearney is quite a small location despite being one of the top five cities of Nebraska. It covers an area of 13 square miles and has an estimated population of around 33,000.

Kearney is found in the south central part of the state in quite an important strategic location, offering access to much larger cities like Des Moines, Omaha, Denver, and more. Originally known as Dobytown, Kearney was given a new name in honor nearby Fort Kearny, which was named after General Stephen W. Kearny, an important officer in the Mexican-American War.

25 Best Things to Do in Nebraska with Kids

25 Best Things to Do in Nebraska