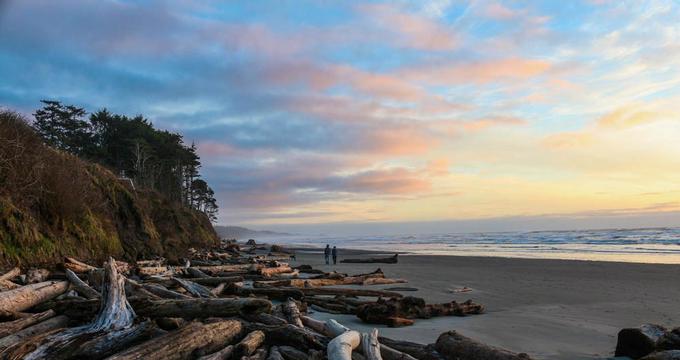 Kalaloch Lodge is located inside Olympic National Park, WA only steps from the Pacific Ocean. Surrounded by dramatic scenery, the lodge consists of a mix of rooms, suites, and private cabins. The property caters to couples, families, and groups, with pet-friendly rooms available. Kalaloch Lodge is located on Highway 101 near Forks, Washington, and is three and one-half hours from Seattle. Certain attractions may be temporarily closed or require advance reservations. Some restaurants are currently offering pickup only. Hours/availability may have changed. 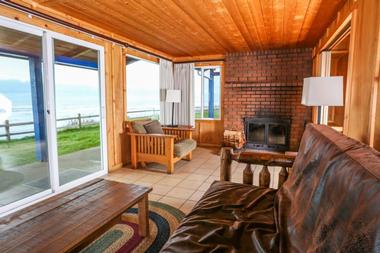 Accommodations at Kalaloch Lodge consist of a main lodge building, another building further back from the highway, and two groups of cabins. Most of the rooms have great views of the mighty Pacific Ocean, and the sound of the pounding surf can be heard from indoors.

The Main Lodge at Kalaloch provides a comfortable, rustic ambience. All rooms at the lodge, including the cabins, have a bathroom with a shower, a coffee maker, a hair dryer, walking sticks, and an alarm clock. All rooms and cabins receive complimentary daily housekeeping.

Only two rooms in the Lodge have internet or television, as the Lodge’s ethos encourages guests to get outdoors and active. Guests who wish for internet connectivity or satellite TV should reserve the Kalaloch Room or Becker’s Room, which both have a king bed, great ocean views, a bathroom with a shower, a private sitting area with a sleeper sofa, a microwave and a mini-fridge. All other accommodations at the Main Lodge have one or two queen-sized beds. The Lodge View rooms have ocean views, while the Standard rooms overlook Highway 101.

The nineteen Bluff Cabins at Kalaloch Lodge are pet-friendly, non-smoking, and have terrific views of the Pacific shore. Many of the rooms have open brick fireplaces or wood-burning stoves, both of which are supplied with one complimentary bundle of firewood every day. Some of the rooms have full kitchens, others have kitchenettes, and some have no cooking facilities at all. Guests who wish for a full kitchen should choose cabins 1, 2, and 3, which sleep two people, 4, 5, 43, or 44, which sleep six people, 6 and 8, which sleep eight people and have wood-burning stoves, or cabins 7, 13, or 14 which sleep five people and have open fireplaces.

The Kalaloch Cabins are built with logs, contain wood-burning stoves, but have no ocean views. All of them receive one complimentary bundle of firewood every day. Guest who want a full kitchen should select cabins 39 40, 41, or 42. All of the other cabins in this section have kitchenettes with a microwave and mini-fridge only.

The Seacrest House is set back from the highway on the edge of a conifer forest. This inn-style building provides balcony or patio seating for all of its guests, and sweeping views of the ocean. The Seacrest Suites have open brick fireplaces with one complimentary bundle of wood every day, one or two private bedrooms, a living area with a futon or a sleeper sofa, a table with seating for four people, and a mini-fridge. 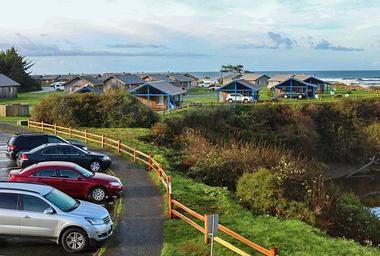 The Creekside Restaurant, in the main lodge building of Kalaloch Lodge, has a Pacific Northwest menu and panoramic ocean views. The restaurant has a commitment to certified organic food, locally sourced, sustainable cuisine, and food low in salt, sugar, and entirely without trans-fat. Wines originate from Washington state wineries.

You are reading "Kalaloch Lodge in Olympic National Park, a Weekend Getaway from Seattle, WA" Back to Top

Small wedding parties can be arranged at Kalaloch Lodge. Outdoor weddings take place in the Gazebo or in front of the Bluff Cabins, both of which have the Pacific as their backdrop.

There is no fee for weddings, but a permit from the National Park Service must be obtained. Guests wishing a catered reception outdoors or indoors can obtain menu help and prices from the food and beverage staff at Kalaloch Lodge; wedding parties of more than 50 people cannot be arranged.

You are reading "Kalaloch Lodge in Olympic National Park, a Weekend Getaway from Seattle, WA" Back to Top 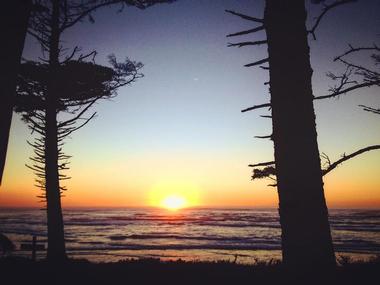 Kalaloch Lodge is located in Olympic National Park on the shores of a Marine Preserve. Teeming with wildlife, the lodge and the park are a nature lover’s delight, and Kalaloch Lodge is only footsteps away from some of the best hiking, fishing, beachcombing, and bird watching in the United States.

Olympic National Park is a diverse eco-zone. The Olympic Mountain range runs the length of the park. There are sub-alpine meadows, full of wildflowers, dense temperate rainforests, and 73 miles of preserved Pacific coastline that hosts marine creatures big and small, from the gigantic gray whale to the tiniest sand crabs and anemones.

Spring visitors to Kalaloch Lodge can delight in gray whale sightings from the shore, or can take a guided whale watching trip out to sea. Olympic National Park is a feeding ground and play area for these 30-ton hulks, who migrate along this route annually on their passage from Baja California to the Bering Strait.

Gray whales are not the only sea creatures that are sighted by visitors to Kalaloch Lodge. Common to the area are sea lions, orcas, harbor porpoises, harbor seals, and sea otters.

Beachcombers will love the driftwood beaches local to Kalaloch Lodge. Ruby beach, named for its reddish sand, is a popular playground for local residents, and starfish, rock crabs, sea snails, and anemones live in the tide pools along the shore. Swimming, sandcastle building, ocean kayaking, gathering shells, and toasting marshmallows over a campfire are all much-loved activities for Kalaloch Lodge guests.

Birdwatchers will be able to spot many birds on their life list. Frequently seen are peregrine falcons, several different types of grouse, woodpeckers and sapsuckers, bald eagles, and western gulls. Rarer birds at Olympic National Park include the belted kingfisher, red-throated loons, brown pelicans, and black scoters. Large nesting colonies of tufted puffins can be seen on the shores of Lake Quinault, a popular location for canoeing, kayaking, and rowing out dinghies.

With over 600 miles of marked trails, there is something for every fitness level in Olympic National Park; some trails are even wheelchair accessible. Some trails permit the use of mountain bikes; others are open to horseback traffic. Dogs may be walked on specially-marked trails. Trail walkers may see any of the animals indigenous to the area. The stately Roosevelt Elk, black bears, black-tailed deer, Olympic marmots, fishers, and mountain goats proliferate, and can be caught on camera by the lucky hiker.

A fishing permit is required to fish the abundant waters of Olympic National Park. With over 3,000 miles of rivers and streams running through the park, most fishers can find a quiet place to fish for salmon, trout, perch, bass, pike, and bullhead. Guided fishing trips are also available.

You are reading "Kalaloch Lodge in Olympic National Park, a Weekend Getaway from Seattle, WA this Weekend with Friends" Back to Top or More places to see near me today, what to do, weekend trips

You are reading "Kalaloch Lodge in Olympic National Park, a Weekend Getaway from Seattle, WA " Back to Top

25 Best Things to Do in Eugene, Oregon

20 of the Most Beautiful Washington State Islands

22 Best Things to Do in Leavenworth, Washington

25 Best Things to Do in Olympia, WA

25 Best Things to Do in Palm Springs, California