Things to Do in Vermont: ECHO Leahy Center for Lake Champlain 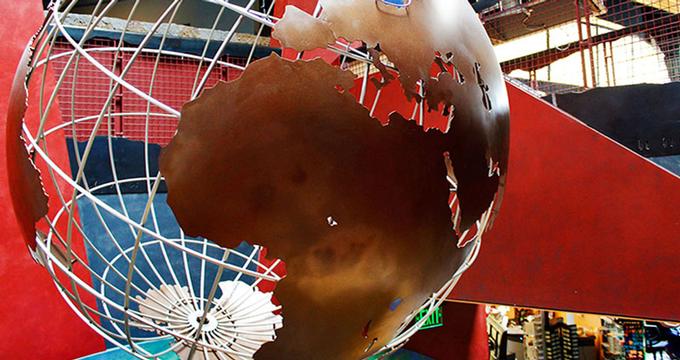 The ECHO Leahy Center for Lake Champlain is a 30,000 square foot lake aquarium and science center in Burlington, Vermont. The two-storey building is conveniently located at the entryway to Waterfront Park, a large regional park near the downtown area. It holds the accolade of being Vermont’s first LEED-certified building, which recognizes its contribution towards resource efficiency and energy conservation.

Established in 2003, ECHO explores the complex social-ecological systems that are around and inside Lake Champlain, the natural freshwater lake west of the city. Its mission is to educate and entertain visitors about the biological and cultural diversity of the region. There are more than 70 species of live animals on display at the center, which give insights to life inside the basin.

Furthermore, the exhibits also explore the evolution in the relationship between humans and geography over time, from the indigenous people who relied on the lake for their livelihoods through today. There are also further discussions about the future of the lake’s health. Its informative and interactive exhibits make this a top family friendly destination in Burlington. CDC information for travelers. Hours/availability may have changed.

More than a dozen species of fish are housed inside the building, including pumpkinseed, yellow perch, brook trout and lake sturgeon. These species of fish are all found inside Lake Champlain and play an important role in maintaining the aquatic ecosystem in the basin. The largest collection of fish is displayed at the Into the Lake exhibit, which features some of the largest species found in Lake Champlain. Check the schedule for feeding sessions that take place in this section daily.

The Land of Opportunity exhibit moves upstream to focus on the ecological system in the river’s upper course, as water flows down from the alpine zone into the lake. The exhibit explores the relationship between the land, plants and animals, and the interaction among them. Some of the questions posed include how land use in the basin affects ecological processes at the lake. This section is also home to an assortment of fish, turtles and amphibians. The exhibit includes detailed information about each creature, including information about its characteristics and place in the natural habitat, next to the animal’s display.

Apart from animals, Into the Lake also has a life-size recreation of an underwater shipwreck. The lake has around 300 shipwrecks that form part of Vermont’s Underwater Historic Preserve. The shipwreck on display is The General Butler that sank in 1876 after it crashed into Burlington’s breakwater during a winter storm. Although a few of the shipwrecks are currently accessible to certified divers, the replica gives the general public a chance to explore a part of the state’s rich archeological history which is usually not easily accessible to them.

This exhibit highlights threats to the long-term health of Lake Champlain. On display is a 2000-gallon tank that houses six animal and four plant invasive species, including Alewife, Zebra Mussel and Japanese Knotweed. These creatures are among the over 50 known invasive species in Lake Champlain. The display narrates the process of how these invasive species arrive at the lake and the damage they inflict on the ecological system.

These species are dangerous because they do not have natural predators in the lake, and therefore they are likely to experience population explosions, often at the expense of other species. Some of these species have been introduced through natural processes but more often than not they arrive via human transport. Interactive games, informative graphics and other features are designed to educate the public about the millions of dollars spent on controlling invasive species and ways in which the public can help to prevent their spread in order to reduce this significant problem. 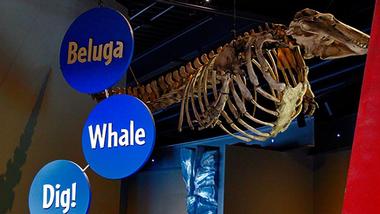 The Action Lab introduces diverse life forms around the Lake Champlain basin through state-of-the-art technology to get visitors involved with the exhibits. The use of advanced 3D technology, live-capture video, and video playback provide new dynamic ways for visitors to get involved in the stewardship of the lake.

The ‘Shaping Watersheds’ station is an augmented reality sandbox that utilizes 3D technology to create a virtual watershed table. Visitors are encouraged to dig their hands into the sand to mold and build mountains, lakes and other landforms, and even induce virtual rain. The installation aims to show how the landscape is intrinsically intertwined with the water flow of the region.

At the ‘Lake Expedition Station’, visitors are given a virtual tour of the 120-mile long Lake Champlain which includes some of its most beautiful locations, such as Fort Montgomery and Ausable Chasm, as well as exclusive insights into one of four underwater shipwrecks that is found in Burlington Bay. See real-time video streams of views from the lake and compare them with weather and seasonal changes at the waterfront. These moving images are captured using hi-speed video technology which allows visitors to control their viewing speed.

Before the Basin and Indigenous Expressions

Both of these exhibits delve into the lake’s earlier history from geological and anthropological points of view. Before the Basin explores the geologic history of the Champlain Valley. Tracing back millions of years ago, it describes the significant tectonic movements and glacial activities that took place hundreds and thousands of years resulting in the region’s topographic landscape today. Some of the evidence presented includes rock deposits and formations that are up to a few million years old and fossilized coral reefs, plants and animals. Visitors will get to touch a live sea star, which is similar to its ancient predecessor, as well as attempt to erode rocks.

The Indigenous Expressions exhibit digs deep into the changes that have taken place in the relationship between human communities and their environment for several thousands of years. From the Paleo-Indians of the last Ice Age to the Abenaki and Mohawk people, the exhibit documents how these communities rely on and control their landscape and also how they are in turn constrained and limited by their surroundings. To enrich the exhibit, the center has partnered with Native American communities of the Lake Champlain Basin to showcase their photographs and audio files in the gallery. These displays provide first-person insights into the life, ways and cultural practices of these people, which provides greater context to the rich heritage of the region.

You are reading "Things to Do in Vermont: ECHO Leahy Center for Lake Champlain" Back to Top

Things to do near me today, beaches with kids, romantic parks, unique places to visit in USA, tourist attractions: Weekend Getaways from Seattle, NC day trips, FL, Near Atlanta, AL 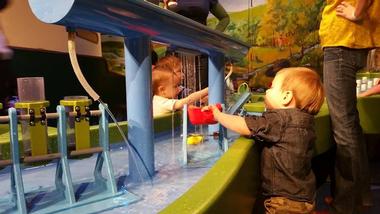 Champ Lane is an interactive, sensory play space created especially for children between the ages of 0 to 6. It is filled with hands-on exhibits designed to introduce young kids to the basics of science and mathematics. Some of its activities include an indoor tree house, bridge and slide to promote risk-taking behavior in a safe environment. Meanwhile, various street scenarios, such as a café, market and home, provide opportunities for kids to develop their social skills while interacting with others. Kids looking to enjoy some down time will be able to sit in the book corner to read or engage in tabletop activities.

The space was designed by Vermont-based artist Russ Bennett, who previously created displays for the Bonnaroo Music and Arts Festival. It is brightly colored and interactive to stimulate the preschoolers’ five senses and develop their spatial awareness.

Lake Brite is a lighting installation featuring 7500 programmable LED light bulbs. From temperature to animal species, the project is an attempt at visualizing data that is related to the health of Lake Champlain. It allows visitors to learn about the facts and figures of Lake Champlain through the artistic display and presents a way to connect with members of the local community.

The NSB Theater is an onsite state-of-the-art theater that allows visitors to watch 2D and 3D films. The center is one of the 14 museums countrywide that has partnered with world-renowned magazine National Geographic to feature its documentary films. After paying a small amount on top of the entrance fees, visitors will get to choose between two high-quality films that are shown on a daily basis.

You are reading "Things to Do in Vermont: ECHO Leahy Center for Lake Champlain" Back to Top

Long weekend getaways with friends near you, weather, best small towns, what should I do in for couples, cheap, with friends, nearby, open now, tonight, affordable, fun things to do near me today: CO, From San Diego, VA, OH, WI, MI, IL, IL, VA, San Diego, TX 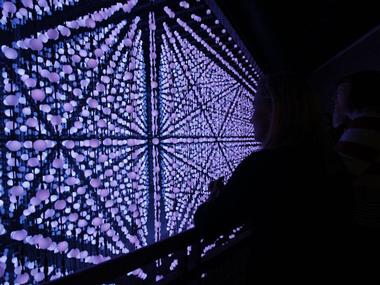 ECHO is part of the Waterfront Park in Burlington which features 900-feet of lakeshore. Visitors can walk down the boardwalk or sit by one of four beaches to enjoy spectacular sunrise and sunset views. Spread over 45 acres of wood and sand, the North Beach Campground on the shores of Lake Champlain can accommodate up to 137 sites. Campers can enjoy shower facilities, free Wi-Fi, picnic tables and campfire equipment at the area.

For outdoor enthusiasts, the park offers numerous options, including paved and dirt trails as well as 9-miles of bicycle path. There are two marina piers along the lake; the Community Boathouse Marina and seasonal Perkins Pier Marina. A number of major events and concerts are held in the park throughout the year, including the Burlington City Marathon, the Burlington Wine and Food Festival and the Maritime Festival among others.

Back to: Best Things to Do in Burlington, Vermont

You are reading "Things to Do in Vermont: ECHO Leahy Center for Lake Champlain this Weekend with Friends" Back to Top or More places to see near me today, Weekend trips

Nearest romantic getaways today at night, places near me, local wedding venues, best small beach town, restaurants, when you are bored, outside, things to do with kids near me, staycation, how do I plan: NC beaches, Ft Lauderdale, Day trips from NYC, From Chicago, PA, CT, CA, Hilton Head, Castles in Texas, GA beaches


Things to Do in Vermont: ECHO Leahy Center for Lake Champlain

You are reading "Things to Do in Vermont: ECHO Leahy Center for Lake Champlain " Back to Top

3 Best Things to Do in Grand Isle, VT