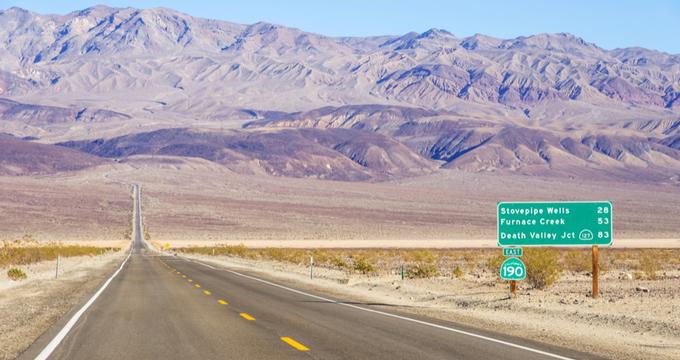 Las Vegas is one of the most visited cities in the whole of the United States. Known as ‘Sin City’ and ‘The Entertainment Capital of the World’, Vegas is famed for its lavish hotels and endless casinos. It’s a place where people come to indulge and have fun, playing games of chance and enjoying live entertainment in the form of concerts, magic shows, theatrical performances, and much more.

Vegas is an amazing place to be, but despite being known for its lights and sounds, the city is also nicely positioned for day trips to some of America’s most extraordinary natural locations and landmarks. Many people start off in Las Vegas when planning trips to the Grand Canyon, for example, and you can also use Vegas a starting point for trips over the state border to Death Valley in California.

Situated in the eastern part of California, not too far from Vegas, Death Valley is part of the Mojave Desert and has been classed as one of the hottest places on Earth, as well as being the point of lowest elevation in all of North America at 282 feet below sea level. It's a fascinating, almost otherworldly location where rain is rare and temperatures can often exceed 100°F in the summer months. Here’s how to plan a Death Valley day trip from Vegas.

Getting to Death Valley from Las Vegas

Death Valley is situated about 125 miles away from Las Vegas, so you can get there and back in the space of a day quite easily and still have plenty of time to explore and admire this unique part of America. However, in order to really make the most of your day, be sure to set off early and plan on arriving back late in the evening. When traveling to Death Valley for a day trip, you can choose to travel by car or on a bus tour. There aren't really any public transportation options for Death Valley day trips.

Getting to Death Valley from Las Vegas by Car

Driving from Las Vegas to Death Valley can be a lot of fun, and many families and groups of friends choose to make the journey by car rather than signing up for a guided tour. The drive from Vegas to Death Valley can be done in as little as two hours if you set off at a good time and avoid the traffic. The fastest route, however, is generally regarded as the least scenic.

There are a few different driving routes you can choose to take. If you simply type Death Valley into your GPS or Google Maps, you'll be given the fastest route straight from Vegas to the valley. It's not a bad drive, but it's quite a dull one and part of the fun of doing a Death Valley road trip is admiring the scenery you'll see along the way.

So, if you'd prefer to try the scenic route to Death Valley, you'll need to add an extra hour onto your journey and drive about an extra 30-40 miles in total, but you'll go along the Salsberry Pass and see lots of Death Valley landmarks along the way like the Devil's Golf Course and Badwater.

Getting to Death Valley from Las Vegas on a Tour

Several guided bus tours leave from Las Vegas to Death Valley. If you'd rather not make the drive yourself or would just prefer to relax and let tour operators worry about all the planning, signing up for one of these tours can be a great way to enjoy a Death Valley day trip. Many of the tours also make some stops along the way at places like the Rhyolite ghost town.

Important Information and Things to Do

- Prepare - Death Valley is an amazing place, but it's a dangerous one too. As its name indicates, Death Valley is a place where death is absolutely possible. Fortunately, there are very few incidents as the national park is well managed and visitors are looked after, but it's still worth preparing for your trip as well as possible. Be sure to fill up your car's gas tank and consider taking some extra fuel along for the ride just in case. There are gas stations around Death Valley, but the prices are high and you never quite know when you might find one. As Death Valley is so hot, you'll need to blast the air conditioning in your car too, which can drain the battery in electric vehicles. Be sure to pack sunscreen, hats, lots of water, and other essentials.

- Things to Do - There are plenty of landmarks dotted around Death Valley to go looking for, with each one having its own name and story. Examples include Badwater Basin, which is the lowest elevation point in America, as well as Dante's View, a terrific natural terrace offering amazing views over the valley and the Black Mountains. Furnace Creek is a good place to visit too, being one of the hottest places on Earth, and the famous moving 'sailing stones' of Death Valley should also be on your list of things to see. Other landmarks include Hells Gate, Darwin Falls, and Devils Hole.