Best Things to Do in Idaho: Lava Hot Springs 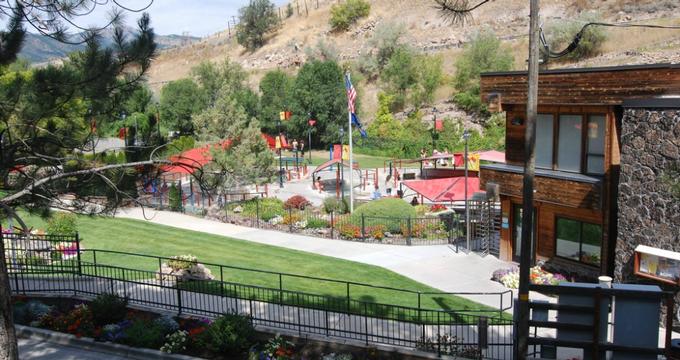 Located within the Pocatello, Idaho Metropolitan Statistical Area near the Portneuf River and Range, Lava Hot Springs is a resort town area known for its natural geothermal hot springs, which serve as popular bathing sites. The Lava Hot Springs area was originally part of the Fort Hall Native American Reservation, an 814-square-mile reservation located along Idaho’s Snake River Plain 20 miles northwest of the city of Pocatello.

The reservation was founded according to the terms of an 1868 treaty, named for a popular European trading post in the Portneuf Valley that comprised a major stop on the 19th-century Oregon and California Trails. The Fort Hall Reservation is the officially recognized home of the Shoshone-Bannock indigenous tribes and contains a population of 5,762, including 5,300 registered tribe members.

The Lava Hot Springs area is home to a number of natural geothermal hot springs, which are produced by rising heated groundwater from within the Earth’s crust. Hot springs waters have traditionally been believed to serve medicinal and healing purposes because of their high mineral content, leading to many folklore legends and traditions among world cultures encouraging bathing in heated springs waters as a cure for ailments such as rheumatism. As part of the 1868 treaty, 178 acres of hot springs land was acquired by the United States federal government, which was transferred to the State of Idaho as part of a 1902 public land use act. The land was later transferred to the control of the Lava Hot Springs Foundation, supervised by the Idaho Department of Parks and Recreation, which retains management of the hot springs facilities today.

Today, Lava Hot Springs is best known for its world-famous Hot Pools Complex, which is located at 430 East Main Street in the city’s downtown area. The pools utilize more than 2.5 million gallons of water per day, which are then diverted into the Portneuf River, and are noted for their lack of sulfur smell. Five outdoor pool areas are available for bathing, with water temperatures ranging between 102 and 112 degrees. A 102-degree “cooler pool” is offered, equipped with a snow melting system and sun-blocking canopies surrounding pool areas. Alcohol and glass containers are not permitted within the pool complex, and use of the facility’s hot pools is not recommended for children under the age of two, as hot springs waters may be dangerous for infants.

Above the hot pools, a Sunken Garden Complex is landscaped with native and international plants, offering an urban garden area terraced by rock walls formed by algae reefs that were once part of the Portneuf River. A system of trails offers shade and opportunities for bird watching. Admission to the gardens is free of charge and does not require pool complex admission.

In addition to the hot pools, Lava Hot Springs offers an Olympic Swimming Pool and Indoor Aquatic Center Water Park complex. An outdoor Olympic-sized pool, which formerly served as an AAU Championship venue, measures 50 meters in length and is divided into eight lanes, containing over a million gallons of water. Its full diving platform offers five-, seven-, and 10-meter platforms above a 17-foot deep end. Several water slides beside the pool provide drops of up to six stories, along with a curly slide complex for younger riders, and a picnic and sunbathing area that allows coolers and lawn chairs. Within the indoor swimming pool complex, an AquaClimb wall offers wet climbing opportunities, and the Portneuf Kiddie Cove provides a safe play area with toys and slides for young visitors.

Small group swimming lessons are offered year-round for a variety of age groups at the indoor pool complex. One-week summer group sessions are offered for children, with four levels of year-round lessons offered based on skill level and technique sets. A Baby and Me swimming group meets for 30-minute sessions, and a Junior Lifeguard program for teenagers ages 11-14 offers opportunities to volunteer on the facility’s premises throughout the summer months. A pre-competitive and recreational league for adult students introduces the four Olympic swimming strokes, along with basic starting and turning techniques. The Rocky Mountain Masters swimming group provides opportunities for drop-in and monthly aquatic workouts and skill development courses, and a competitive swim team, the Lava Hot Springs HEAT, is offered for youth ages 5-18.

A Dogapoolooza event in September offers open swim time at the pool and water park complex for families with pets. In December, the Snowman Games Endurance Swim serves as a charity fundraiser for Toys for Tots and offers Santa visits in the indoor pool’s lobby. A Kids’ Tri Lava Triathlon race is held in May, and a Fire and Ice Children's Water Carnival serves as part of the city’s annual Fire and Ice Winterfest festival.

More Things to Do in Idaho

25 Best Things to Do in Boise (Idaho)