Things to Do in Honolulu: Queen Emma Summer Palace 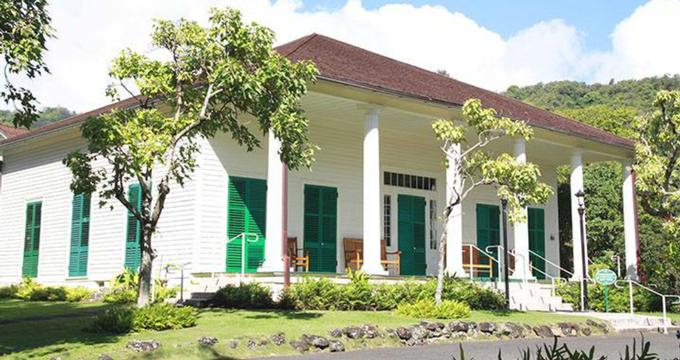 According to Hawaiian tradition, she was adopted into the family of her maternal aunt, Grace Kama'iku'i Young Rooke, and educated by American missionaries at the Royal School of Hawaii. In 1856, she married Alexander ?Iolani Liholiho, who assumed the throne as Hawaii’s fourth monarch under the title of Kamehameha IV. Following her husband’s death in 1862, Queen Emma ran against David Kalakaua in the 1874 royal election, but despite her popular support, she was defeated on a 39-6 vote in Hawaii’s Legislative Assembly and retired from public service shortly thereafter.

The frame for Emma’s summer estate was constructed in Boston in 1848 and assembled on property owned by the Kingdom of Hawai’i in Oahu’s Nu?uanu Valley, a long-established site for Hawaiian royalty property. The estate was purchased by Emma’s uncle, Keoni Ana, in 1850, and presented as a gift to Emma in 1857. From 1857 until her death in 1885, the estate served as a retreat home for Emma and her family. Following her death, the estate was purchased by the Kingdom of Hawai’i, and in 1911, it was transferred to the control of the City and County of Honolulu for use as a public park. The estate was nearly lost in 1915 as part of plans to build a baseball stadium in Honolulu, but was subsequently purchased by the Daughters of Hawai’i, a nonprofit organization dedicated to the preservation of traditional Hawaiian culture. In 1973, the estate was listed on the National Register of Historic Places, ensuring its permanent preservation as a Hawaiian landmark.

Today, the estate and its grounds are operated as a living history museum by the Daughters of Hawai’i, which also maintains and operates the nearby Hulihe‘e Palace. The 2.16-acre homestead is a one-story Greek Revival estate with colonial-style Doric pillars, surrounded by gardens landscaped with native Hawaiian plants. Guided tours of the facility for small groups and organizations may be scheduled privately in advance by contacting the Daughters of Hawai’i. A small gift shop on site also sells handcrafted items by local artisans and publications by the Daughters of Hawai’i.

The estate has been preserved in its original condition as a royal residence, displaying many personal possessions that once belonged to Queen Emma, King Kamehameha, and their son, Prince Albert Edward Kamehameha. The house is divided into seven rooms, including an Entrance Hall displaying a royal coat of arms and several portraits of important Hawaiian royal and historical figures. The Front Bedroom, which formerly served as the estate’s dining room, contains a sleigh bed belonging to Queen Emma and a cradle and bathtub used by the young Prince Albert Edward. More of the Prince’s possessions, including a koa crib and a display cabinet containing an authentic velvet suit, can be seen in the Back Bedroom. The estate’s Parlor contains a baby grand piano owned by the queen, and a Cloak Room displays preserved royal feather cloaks. A Center Hall connects the estate’s main rooms and features artifacts such as a stereopticon given to the Queen by Napoleon III on an 1865 visit to France. The Edinburgh Room, added to the estate in 1869 in advance of a visit with the Duke of Edinburgh, contains rosewood furniture and a royal cabinet holding china given to the Queen as a present by Queen Victoria.

In addition to private tours, two areas of the estate’s grounds may be rented as private special events venues. The 50-seat, 1,400-square-foot Prince Albert Terrace is as a popular venue for weddings, surrounded by landscaped gardens overlooking Nu’uanu Park. Emmalani Hale serves as a conference center and event venue, featuring an open-air multipurpose space with seating for over 1,000, a pull-down projector screen, and a small kitchen facility for catering. Tables and chairs, bar service, and a small stage may be provided upon request with venue rental, although catering and valet parking services must be arranged by the renter.

A variety of cultural classes are held weekly at the estate, including ukulele, quilting, and hula lessons. The estate also serves as the meeting place for rehearsals for the Emmalani Serenaders, a community choral group for vocalists of all ages and skill levels. Periodic special events are held at the estate and the nearby Hulihe‘e Palace commemorating important Hawaiian public days and historic royal family member birthdays.