Things to Do in Honolulu: Iolani Palace 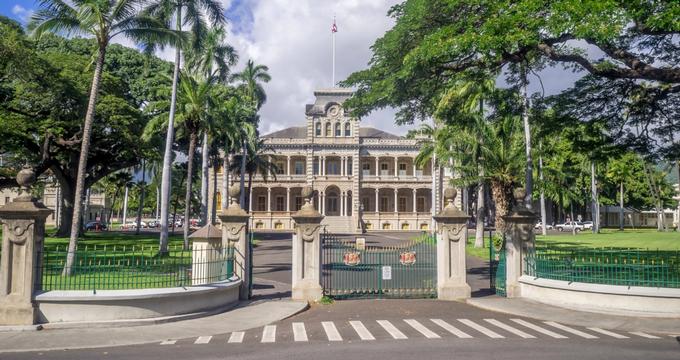 Located in Honolulu, Hawaii, the ‘Iolani Palace the only royal palace in the United States and operates as a living history museum dedicated to preserving the history of Hawaii’s Kamehameha and Kalakaua Dynasties. Prior to the mid-19th century, the site of the current ‘Iolani Palace housed an ancient burial site for Hawaii’s ali’i ruling class, along with several estate residences for members of the House of Kamehameha.

In 1844, Mataio Kekuanao?a, the Royal Governor of O’ahu, began constructing a new royal residence at the location of a demolished former estate, rumored to have once been the site of an ancient religious temple. Named Hale Ali?i, which translates to House of the Chiefs, the residence was intended as a gift for Kekuanao?a’s daughter, Princess Victoria Kamamalu. In 1845, however, the residence was purchased by King Kamehameha III, who moved the kingdom’s seat of government from Lahaina, Maui to Honolulu during his tenure. The Hale Ali’i residence remained the official residence of the Kamehameha Dynasty until 1872, when King Kamehameha V died without naming a successor.

By the time David Kalakaua assumed the kingdom’s throne in 1874, the former Hale Ali’i palace was in disrepair, suffering major foundational damage from termites. As the first Hawai’ian monarch to visit Europe, Kalakaua was inspired by the grand palaces of European monarchies, and as such, commissioned the construction of a new palace on the Hale Ali’i site. Designed by architect Thomas J. Baker with additional work by Charles J. Wall and Isaac Moore, the cornerstone for the new ‘Iolani Palace was laid on December 31, 1879. After three years of construction, ‘Iolani Palace was completed at an unprecedented cost of $340,000, furnished with modern amenities such as indoor plumbing, telephones, and the first electric lighting system on the islands. A formal coronation ceremony for the palace was held in 1883.

The Palace served as the Hawai’ian monarch’s official residence until 1893, when the government of Queen Liliuokalani, Kalakaua’s sister and successor, was overthrown by the Committee of Safety. An 1895 attempt to restore the Queen’s power resulted in her arrest and nine-month imprisonment within a bedroom at the Palace. Following the overthrow, the Palace was converted into the headquarters for the Provisional Government of Hawai’i, and later, the capitol building for the Territory of Hawai’i following the region’s annexation by the United States in 1898. The palace was fully restored in 1935 and temporarily served as a military headquarters during World War II before becoming the government capitol for the State of Hawaii in 1959. A decade later, the state government vacated the building and moved to the current Hawaii State Capitol building in downtown Honolulu. The palace was then fully restored to its 19th-century appearance and furnishings by the Junior League of Honolulu, and in 1978, it was opened to the public as a living history museum.

Today, the ‘Iolani Palace stands as a unique example of American Florentine architecture, the only building of its type in the world. Palace tour operations are overseen by the Friends of ?Iolani Palace nonprofit organization, which offers two tour package options to visitors. Guided tours are led by docents and last approximately 90 minutes, while self-guided tours allow visitors to explore the palace and its grounds at their leisure with the accompaniment of an audio guide. A limited tour package allowing visitors to explore the Basement Gallery Exhibits, which showcase items from the Royal Collection and highlight the palace’s restored kitchen, is also offered, and a short introductory film, “The King’s Noble Vision,” is presented for free every half hour.

The palace’s first- and second-story rooms have been fully renovated for tours. Three first-floor rooms contain areas once used for formal state events and meetings with dignitaries, including the Throne Room, the palace’s largest room, which was used for state balls and diplomatic receptions and served as the site of Queen Liliuokalani’s trial following the government overthrow. Smaller informal meetings were held in the Blue Room, which features a koa wood piano and matching portraits of Liliuokalani and Kalakaua. A State Dining Room contains floor-to-ceiling windows and Parisian porcelain adornments, and a Grand Hall, which spans the entire length of the Palace, is decorated with portraits of Hawai’i’s former kings and queens and contains a Hawaiian koa wood staircase leading to the palace’s second floor.

On the palace’s second floor, visitors may tour the Imprisonment Room, where Liliuokalani served her sentence, along with the King’s Library, Music Room, and several bedroom suites. Several sites on the palace’s grounds may also be explored, including the Keliiponi Hale Coronation Pavilion, the Sacred Mound royal tomb, and the Iolani Barracks building.

In addition to standard visitor tours, several tour packages are offered for school groups and organizations, tailored to state curriculum standards. Elementary school tour groups receive an abbreviated tour with exploration of the Basement Gallery Exhibits, while middle and high school groups may tour the full palace. A number of public events are held at the palace throughout the year, including public celebrations of monarchy members’ birthdays. Weekly concerts by the Royal Hawaiian Band are held on the palace’s grounds, and Saturday morning classes are offered on the art of Hawaiian quilting.